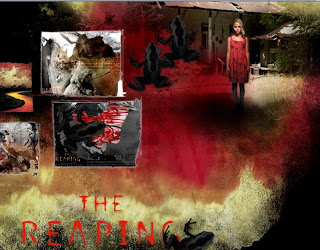 The Reaping: aka "How Hilary Swank decided to amplify her 2 time Oscar winning career with a stinker of a movie" or even better "Ms Swank's best attempt at professional hara kiri."

Seriously, maybe this is a trend- Halley Berry gave us a Catwoman after Monsters Ball, so perhaps Ms Swank felt a similar compulsion.

Swank plays Katherine - a professor and former missionary/minister who lost her husband and daughter in a mission in Sudan. Scarred by the tragedy, she renounces God and turns some kind of a professor at the University of Louisiana- but appears to spend more time travelling to prove as hoaxes any phenomenon that other people consider to be miracles and signals from God. One fine day she is approached by Doug Blackwell who asks her help in solving a mytery in his small town named (nudge, nudge), Haven. Apparently the locals believe that a 12 year old girl, Loren is devil-possessed, has killed her brother using her supposed powers, and therefore has wrought the wrath of God upon the town in the form of the 10 biblical plagues: starting with turning the river into blood! Katherine is convinced there must be some sort of scientific reason, so she heads off to Haven with her colleague, Ben (Idris Elba: notice how I specifically made sure I knew who he was- ladies, this man is v v beautiful, compassionate and overall HOT), before the locals basically lynches Loren.

1/2 Hour into the movie, I wanted to go home- it was Thurday night, and I could do well do get in an hour of CPA studying in (yeah I need to pass that mess)- but some sadomachoistic streak within me kept me in my seat- as did the fact that I'd just plonked down almost $25 for this visual treat (yeah right), including tickets and snacks (I'm always wolfishly hungry after work). The makers could have taken this the Omen route, but instead appear to be almost timid in their approach, leaving us befuddled as to what they really wanted to say.

Warning: Spoiler ahead
So Doug turns out to be the head of a satanist cult, which comprises of the entire village of Haven, including Loren's mother. They have all been trying to kill Loren (supposedly one of God's chosen angels), and when they cant, they figure they can get Katherine in to do the job, since she is so anti God. Needless to say, thats the dumbest plan ever- to top it off, Doug impregnates Katherine, since that may get the satanists the devil child they have wanted so long. The plagues are explained by Loren's need to defend herself from the village.

The holes in this plot are so many that I, like you gentle reader, have pretty much lost sight of what the heck the plot was. Anyways- this ugly mess ends with Loren sucessfully killing all the bad folks- now why the heck did she not do this before Katherine came to haven and poor Ben died (sob, weep): no one knows. The movie closes with Katherine driving Loren and herself out os the pretty much destroyed village (all this, and still no CNN/SKY/ABC reporters show up- let alone the police), when Loren cheerfully announces that Katherine is pregnant- and the devil will be reborn as the child she carries- brilliant (not).

Note: After watching this bomb, I went home and turned on the TV, only to realize that I'd missed the rerun of one of my all time SciFi teleseries, the Dune- AAGH!!!
Posted by Shweta Mehrotra Gahlawat at 9:27 AM

i am sure u mean hara kiri?

go ahead and delete this, after all you have enabled comment moderation- the best indicator of a blogger not open to criticism :D

Thank you for the correction- duly corrected.