The theatre was full- a rare sight even on a Friday night like this. The opening credits rolled, and Bruce Willis walked in as Sgt. McClane- which solicited a groan from my husband "He looks SO old! Honey this means we ARE getting old too." I agreed- after all- Bruce was my 80s childhood hero, who I had seen gun down countless thousands of people in across a number of movies. However, by the end of the movie, the entire theatre was literally cheering when the closing credits rolled and my husband was convinced he was a teenager again- 'cos McClane (and yes of course, Bruce) is still the MAN! 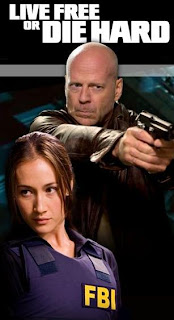 Love the stunts, the mindless shootouts, the quick killings- its just so good to see John McClane take the system one more time. To top it off, he is not just fighting any 'ol terrorists- this time he is head to head against Thomas Gabriel (Timothy Olyphant), a former government employee determined to digitally disable the U.S. because the feds didn't agree with the strategies he wanted to have implemented in a post-9/11 scenario. It's a fire sale: where everything goes in three systematic stages if it's run by computer. 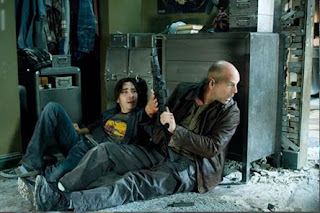 Anyway, back to the plot. It's up to McClane to transport a hacker, Matt Farrell (Justin Long- the Mac guy from TV), from New Jersey to Washington, D.C., whom the FBI believes may have assisted Gabriel. The journey to capitol hill and beyond, the struggle against Gabriel is the crux of the movie. And of course, if there was ever any doubt, McClance kills 'em all (even shoots himself!) and wins. Pure entertainment. 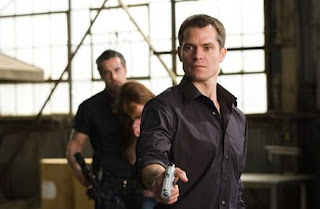 There is entertaining byplay between McClane and Farrell, and no romance anywhere in the movie (if you exclude Maggie Q's little aside with Timothy Olyphant), and its just cars bashing against more cars, helicopters, trucks, bridges and the like- fun! On the personal front, we do get to know that McClane is divorced now, and his daughter Lucy is in University. Along the way, Gabriel also kidnaps Lucy(Mary Elizabeth Winstead), making the fight "personal." 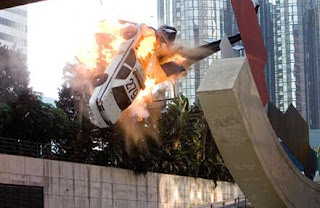 Minor Quibble: The conclusion of the movie is around the Baltimore area, which isn't exactly a teeming metropolis, but at the same time, isn't a dead town either. During the chase scenes etc., it seems the town is utterly deserted at times, while at other times, you see traffic in the horizon. If destruction of that magnitude would be happening anywhere, even with all systems down, I would still expect local residents to at least come out and gawk!-- OK OK, it is only an escapist fantasy I know.

Not to miss: Kevin Smith (Clerks and more) as "Warlock," the mega high-tech geek who assists McClane and Farrell in their quest, while sporting action figures in his techie den.
Posted by Shweta Mehrotra Gahlawat at 10:58 AM