For this set of reviews, I chose Bollywood horror that I consider by far the best- though you may have your own favorites which I may have missed. Interestingly, all three feature mainstream actors, who lend a certain credibility to these projects. Unfortunately, these are few and far between. What scares you?

The scaried Bolly movie ever! 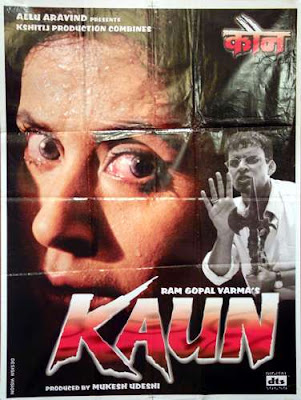 Essentially a slasher movie, from our last discussion on this blog, this seems to be everyone's favorite scary movie. And it is hard indeed not to love.

Urmila is home one quiet, rainy day- and hears on TV that a crazed killer is on the loose. Her house is a bit away from the others, which creeps her out. She shuts all the doors and windows, and settles in to play with the cat.

But Manoj wants in! He is looking for someone who is probably a previous owner, and has come a fair distance. Stranded in the rain, he is reluctantly taken in by Urmila. But then there is another knock- it is Sushant- he is a policeman (or is he?), and is looking for a thief, who could in fact be the murderer on the loose. So what happens next?

With a cast of only three, no distracting songs (but very effective background music), and no special effects, Urmila, Manoj and Sushant created a horror classic- if you haven't watched it yet, what are you waiting for???

Pros:
1- The brilliant cast.
2- The lack of special effects- the script had no distractions from itself whatsoever, which fact not many directors seem to understand.

Cons:
1- In the end, we are told via voice over that the mystery was resolved when the smell of the disintegrating bodies reached the neighbors- which makes little sense- the neighbors were far away enough to not hear gun shots and screams, or see people moving around- but those darned human bloodhounds sure could smell!

This is probably one of the earliest "genteel" horror movies I have seen- certainly the stars add all the gravitas possible.

Shriram Lagoo is a rich man, married to Indrani, with elder son Anant and a young and adorable daughter Padmini, who was really good here.

They move to a new house, and Padmini begins to act weird- the father (as all fathers must) believes it is a psychological issue, while the mother believes it is supernatural. Meanwhile, the elder brother is trying to figure out a way to bridge the gap between this difference of opinion and find a solution. Soon, Padmini is possessed, and begins to blurt out secrets about her father that he has never shared with his family....

Pros:
1- Padmini, very young, adorable and perfect for the part.
2- A brilliant supporting cast- Shriram especially does really really well. (telling you more would be too much of a spoiler :))
3- Amrish Puri plays an evil priest, and is properly scarier than the ghost itself :)

Cons:
1- Drags in parts- could be edited better.

#3: if only the ghost looked less like a melted candle...[sigh] 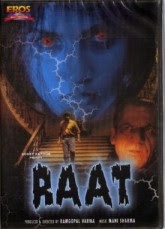 Akash and Rohini move into a house with their daughter Revathy and little Bunty, their dead older daughter's child.

Soon Revathy is possessed by the house's resident spirit, and begins killing off people randomly. There is also a ghostly cat in the mix, in case we are missing wildlife.

Akash calls in the doctor- played by Anant Nag (I do love this man)- who cant figure out what is going wrong. Meanwhile Revathy's remarkably fugly boyfriend (who I love anyways) joins hands with Rohini to figure out the paranormal angle. They call in Om Puri, a priest (who looks anything but) for a final showdown in the basement :)

Pros:
1- Revathy, who I can watch raptly brushing her teeth if nothing else :)
2- Rohini, who I miss so much- she is coming back in the new "Karzzzz" - which may turn out to be scarier than Raat :)
3- Neat atmosphere.

Cons:
1- Nothing really happens- the ghost finally appears in the very end, with bad make up and makes me wonder why Om Puri bothered with this.
2- So many missed opportunities- they create great atmosphere, but a lot of the "wow" moments are just let to fizzle out without follow up :/

How this could be better:
1- Better fashions for the entire cast, most of all for poor Revathy and Deepak.
2- A better make-up person, and longer screen-time for the ghost.

Posted by Shweta Mehrotra Gahlawat at 9:26 AM

I'm a huge horror fanatic so hardly any Bollywood horror movies "scare" me. I do admit Kaun is really well done.

Saw Raat a while back. It wasn't bad. Haven't seen Gehrayee. But looks really good. I love Padmini too.

Have you seen Red Rose? I really liked it and it was scary to me at that time, maybe cause I was younger.

Nicki: See w/ Raat and Gehrayee, my point of view is completely biased since I love the actors there :D

I did a quick search re: Red Rose- I thank you for telling me about a Rajesh Khanna movie that I really really WANT to see now :)

I remember seeing Gehrayee as a kid! Or maybe in college, am not sure. I was appropriately creepified. But horror films are a no-no genre for me.

Horror movies are mostly a no-no in my home- the hubby wont get in the same room as one- but I watch 'em on the sly :D Being hard to get makes em appear better than they prob are - rofl

Urmila scares the bejesus out of me.

If you want to watch Red Rose, go to Rajshri website, they have a TON of movies to watch for free. I'll post a link for you on facebook.

have a good weekend, are u gonna watch 'quarantine'?

Horror movies usually make me laugh, but Kaun is easily my favourite among this genre in any language! I have seen it at least 30+ times and it still freaks me out to no end! Urmila is so underused and underrated, bah!

Raat was alright. That one scene where SPOILER ALERT! the hands come out of the wall freaked me out, but other than that, I don't remember that movie at all!

I must check out 'Gehrayee' now to amuse myself some more :P Amrish Puri is ♥♥♥ May he rest in peace.

I'm a big wuss, so much so that the Kaun poster is very scary. LOL I always breathe a sigh of relief when Halloween's over!

Thanks for the post, Shweta! Horror and Bollywood are two things I never thought to mix. Not quite sure why--I haven't heard anything negative or positive, I just never had any good recos--until now/ :)

TS: Will see Red Rose- thanks! but no movie theaters for me- v v broke :D

Arantxa: Gehrayee has the same pace as "Raat"- be warned!
:)

Ajnabi: lols- the movie is even scarier- no blood, but wks on a psychological level- the first time, I screamed through it.

Nida: Usually, Bolly horror is super campy and super awful- which I find hilarious. Once in a while, like the ones in this post, it IS pretty scary- but like i said, I find quality Bolly horror pretty scarce.

Would Kaun really qualify as "Horror"? There is no supernatural element in it. Still, it was scary. I remember the scene where the hands come out of the wall - my friend and I held on to each other and our guy friends called us chicken! Didnt scare me on re-watch, though.

PS: Is your Shashi-Hema header from Naach Uthe Sansar?

I'd think that Kaun qualifies as a slasher movie, which in turn qualify as a sub-genre of horror movies, just by comparing with the Hollywood counterparts. So I think it'd b fair to include it here- what do u think? For that matter, I am wondering about other Bollyslasher movies in existence, and watching "Red Rose" tonight.

My reaction on Raat was pretty much exactly like urs :D rofl- I think one is SO used to no SOLID ghosties by that point, that the hands freak one out :)

You know, I've no idea about that pic! I had googled for "Shashi Kapoor", and found it :)