Movies can be bad, no matter what

And this is proved by the following movies: 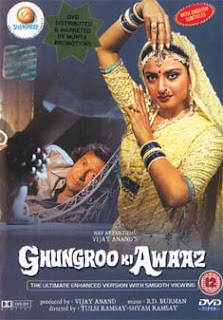 Vijay Anand made movies like Guide (1965) and Jewel Thief (1967). Then he debased himelf towards the end of his career with this clunker of a movie, which yours truly delighted in rushing through and promptly dissing.

Vijay was never a handsome man by any standards, and here he looks downright decrepit as he goes through the motions of being a wealthy landowner, who meets a prostitute, Rekha. Love happens, as does marriage, until one day he witnesses her with an old boyfriend and shoots her to death. He begins to see her ghost everywhere- in the middle of which is revealed to us that his uncle, Shriram Lagoo, has actually hired Rekha as an accomplice to get Vijay's wealth, and that she is alive not dead. By faking her murder and scaring Vijay with her fake ghost, Dr. Lagoo hopes to drive Vijay to the asylum and usurp his wealth. And all this does happen, very painfully, and with bad acting and deliberation by all involved.

Rekha cant take it anymore when her lover is finally nuts- she reveals all to him and gets him out, whereupon they eventually get sweet revenge upon the evil uncle. That's it.

Pros: Rekha, who looks beautiful, despite all odds (the sets and lighting are awful, not to mention the costumes, which appear straight out of some charade). She made this movie the same year she did the immortalised Umrao Jaan and Silsila- I guess she is allowed some wrong!

Note: Tulsi Ramsay directed this movie, and it was therefore one of the many horror/semi horror/intrigue movies released under the "Ramsay Brothers" banner. It is interesting to note that Tulsi began his career by directing 1967's Indonesian horror movie, Penanggalan- still looking of a copy of that! 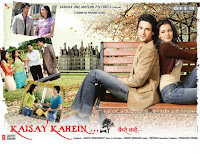 We jump more than 25 years ahead to 2007 from Ghungroo.. to this movie- and what do we find? ah nothing my friend- just crap.

Rajveer and Neha meet live in the UK (I think), meet, and fall in love. They live together for awhile, but Neha moves away to India 'cos she is made senior editor (or something) at the Indian national office of the newspaper she works for (HOW??? she doesn't seem to do any work- but whatever). Rajveer stays back for his own career. They part bitterly, but eventually make up long distance- she even comes back for a visit, but leaves in a huff after refusing to give up her work, marrying him and staying back. In between, an aging Aditi Gowrikar appears as a cougar female boss that Rajveer briefly sleeps with. Years later, Rajveer and Neha meet again when he is being felicitated in some shady "Businessman of the Year" awards ceremony- but she is already with someone else. Somehow, the entire blame of their break-up is somehow, by this time, Rajveer's doing. The movie ends here.

What the heck???!!! What was this about anyways? Neha is a screachy, shrill woman who can act, in parts. Rajveer is not that great looking, cant emote, but can speak. No personality on those too either. The script is horrible, with initially Rajveer etched as a sympathetic character, and Neha shrewish. By the end of the movie, we somehow see a character reversal, where neha softens, and Rajveer is labelled the bad guy for no apparent reason. When folks walk away from each other, they normally find other people to be with, and its no one's fault- their time together was up, and one would hope that the director/writer would give some recognition to that. Technical flaws are rediculous and many- Rajveer uses his laptop on a river back in the UK, as well as other locations where it would be technically very difficult to have wireless connectivity, even in this day and age. However, he is not only shown to have connectivity, it is apparently seamless- he chats and emails with amazing speed (what kind of in-built router does that man have? my firm better not know- they will make us work 24-7 then (right now its still 14-6))

This movie is so bad that it is simply bad, with no reprise of any kind. Saw it in about 1/2 hr, fast forwarding much, but still felt like killing myself after it was done. Ugggh!!!
Posted by Shweta Mehrotra Gahlawat at 12:05 AM

"When folks walk away from each other, they normally find other people to be with, and its no one's fault- their time together was up, and one would hope that the director/write would give some recognition to that."