Every film festival has its share of gossip, so how could we resist a mid-fest edition of Abhay News?

Lately, the news media have had a field day speculating about Abhay's girlfriend- sometimes she has been "someone in New York," at other times a "British Beauty Queen" (BBQ anyone?), along with the luminous Sonam Kapoor. Which is all rehashed news in bits and pieces from his old interviews and is all good, but then there are the ladies I WISH he would go out with:

1- Minissha Lamba- they look so cute together! 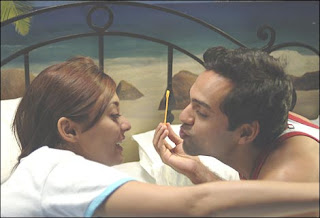 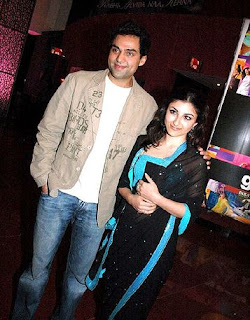 Who do you prefer him with?

Matchmaking done (which I suck at in real life), there is finally insight about his next, which apparently IS curently titled just "Road Movie"- it sounds deliciously surreal and interesting: It’s a film about a journey of a guy who drives a truck of moving cinema through the expanse of Rajasthan and Gujarat. On his way, he meets three characters — a boy, an old man and a woman. It’s a film where reality and fantasy meet. You can read the rest of the interview from which this is extracted here.

Also, by now most of us know of his lecture at Wharton, which incidentally is the B-school I've aspired for a few years now- one day soon I hope.

Meanwhile, the cousins are having their say; Sunny is being appropriately brotherly and complementary (he was in SoCal earlier this month! I suspect for a hair weave!) and prepping for Cheers, which I cant wait for already. Esha says is aspiring to Manorama and Dev D- seriously woman, take an acting class first, and learn to emote with the face, the eyes. She is obviously not getting acting gigs, and should maybe stick permanently to dancing, which she IS good at.

Last on the radar is Dibakar Bannerjee, the brilliant and honest director of "Oye Lucky! Lucky Oye!" "and "Khosla Ka Ghosla," who in a interview has discussed potentially making a political thriller with Abhay. Yay!

Posted by Shweta Mehrotra Gahlawat at 7:12 AM

And a 'Road Movie' and that too on roads of (my)Gujarat & (lovely)Rasthan??? Sounds *WOW*

And btw, Sonam is so busy with dashing Kunal (no need to change surname, haan?)

Can not wait for Abhay and Sonam pairing.

I love Sonam & Genelia, so I'd love to see either of them get with Abhay IRL. Aren't there 2 Kunal Kapoors? Which one is Sonam with?

Really? Aren't there 2 Kunal Kapoors? Which one is Sonam with?

I second Nicki's vote for Genelia, but I'd really like to see him with Sonam too!

Nicki: What a wonderful idea- Genelia may actually be excellent opposite Abahy!

Ajnabi: Genelai would look perfect! Darshit meant 2 Kunals I think. There ARE 2 Kunal Kapoors, 1 being the Rang De Basanti guy (http://s.chakpak.com/se_images/39654_-1_564_none/kunal-kapoor-wallpaper.jpg) and the other being Shashi's son (http://www.indianetzone.com/34/images/KunalKapoor_16965.jpg) The RDB guy is supposed to be dating Sonam. The OTHER Kunal is Kunal Khemu, allegedly dating Soha. - I do think its confusing- wish theyd all pic diff names :D

OMG, that 'confusion' made me laugh all the way at home.

Okay, I need to stop laughing, everybody is staring at me