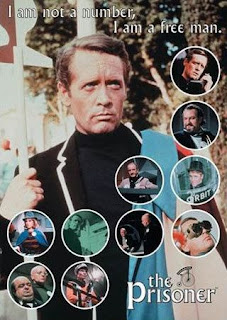 Title: The Prisoner
Year: 1968
Cast: Patrick McGoohan, with other supporting cast.
"I am not a number, I am a free man!
This dialogue, from the opening sequence of every one of the 17 episodes of this TV series encapsulates the essential 60s anthem- the revolution against the "system."
Its all my friend Steve's fault really- this past Saturday, he brought over his entire A&E DVD collection of The Prisoner, and spends most of Saturday (though we did thankfully run out for groceries earlier) with hubby and me, huddled on our bed, drinking rum and coke and watching the hour long episodes with rapt attention. Caught as we were in the vortex, we only watched the 1st 5 episodes with Steve- but unable to sleep after he left at 10pm, wound up watching 4 more before crashing to bed at 2am. Of course, the next morning we promptly got back to our marathon, somehow getting through only with the laundry in the list of chores we had for the weekend. 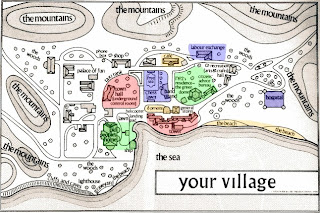 So what makes The Prisoner eminently watchable even after 40 years? Yes the mod outfits are a hoot, as is the earnestness adopted by the actors, regardless of the shenanigans they might be up to. However, the plot itself is eminently gripping. An agent (Patrick McGoohan) abruptly leaves the British secret services at the height of his career without explanation- from what we gather, to simply get away from it all and spend time in holidaying on a tropical island somewhere. This explanation however is unfathomable by both 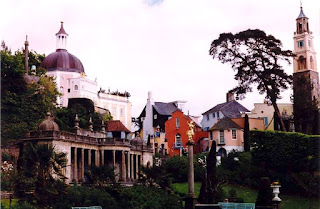 sides (the British government and the "other side"), and SOME GROUP (never quite clarified) kidnaps him and brings him to The Village. The Village is in an unidentified location, cut-off from the world on 3 sides by mountains and 1 by the sea, and consists of inhabitants either ruling or being ruled. Also in tow is Rover, an ominous white balloon (yes really- a "ominous." white. balloon- this was in actuality a weather balloon and the most expensive "special effect" employed by the Series) which can kill, and acts as an essential watchdog (hence the name). Everyone is only known by an assigned number in The Village, and the Agent himself (never named), is given the #6. #2 serves as the local administrator and is replaced often; #1 is essentially faceless until the end. The 17 episodes essentially mark the Agent's struggle to escape The Village, while #2 and most of the Villagers try to squirrel out the reason why he left the Secret Service from him (is one man really that important to anyone???) 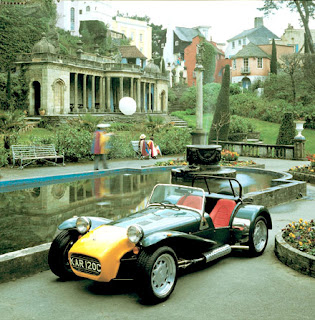 This is a very addictive series, with Patrick McGoohan outwitting his captors at every attempt from unearthing his secret, while maintaining his struggle to overthrow this "system" thrust upon him. We hear refrains of Beatles music all along (loudest in episode 17), with allegorical reference to the struggle of man at every turn. Critics have widely compared this to 1984, but Patrick M's vision is unique to himself (he also directed this, after turning down an offer to be James Bond). The Agent's 60's sport Lotus (in "Many Happy returns" he declares he made it himself!) is the height of cool, as are the outfits and colors all around. The show isn't cut and dried- folks are still debating the surrealistic aspects, since almost every scene has an element of allegory. Confusing as it is, The Prisoner captures your attention and does not let go- watch it!
Posted by Shweta Mehrotra Gahlawat at 10:32 AM