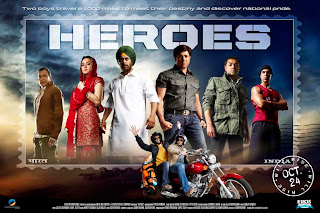 Title: Heroes
Year: 2008
Cast: Sohail Khan, Vatsal Seth- supported by Salman, Preity, Mithun, Dino, Sunny and Bobby.
Sohail and Vatsal are cruising through life in Delhi, going to film school. Tinnu Anand, the School President, will pass them only if they produce and direct suitable student movies, in lieu of their final exam.

div align="justify">They figure they want to make a movie re: reasons to not join the armed forces, and therefore meet ace reporter Mohnish Behl (LOVE), who gives them three letters, each from a martyr to his family- they have never been delivered, and he figures if the boys deliver them, then they will have their movie and the martyr's families would have some solace.
Their journey brings them first to Preity in Punjab- I swear if doesnt make you sniff and sob even a little, you have a heart of stone. I cried rivers throughout, it was so touching!
Then to Himachal, to meet Sunny- who is in full "Gadar"-mode, which may feel a bit excessive, but in the present climate, was totally tolerable. Bobby is ineffective- he has little to work with I agree, but he brings zero charisma to the role.
Finally they meet Mithun- who is so vulnerable, and so brilliant. The best that can be said about Dino is that he is at least better than Bobby.

Highlights:
1- Preity and Mithun- they shine, as does Dwij Yadav, who plays Preity's son.
2- The scenary. There is so much to see in India- I am almost ready to move back!

Quibbles:
1- Technical mistake #1: Sunny is so strong, that he throws people UP diagonally while lying on the floor- they fly in perfect arcs before hurting themselves senseless on whatever furniture is available. The 2nd bit is OK (what did you expect from Sunny? he's the man) but its against the laws of physics to be able to make that throw, even though that wasnt my strong point in school.
2- Sohail catches a fish with his bare hands in a pond- which fact in itself isnt a huge issue (superhuman abound in Bollyland), but the fish, when drawn out of water, lies perfectly still- no throes of death. He shakes it about to fake some good ol' throes, which fails. Then he lowers it back into the water, at which point the camera finally cuts away- we are spared seeing the poor dead fish sinking into the water :S
3- I am SO not an expert, but I thought you would need some sound recording equipment with the camera that the boys were using to film- I am pretty sure I've seen a mike contraption being used with that specific camera type somewhere- please correct me if I am mistaken.
4- The problem is that the movie is a mix of good actors and terrible actors. I know I found it soothing, but came away from it unsatisfied- casting is important Mr. Karnik- please keep that in mind next time!
Notes:
1- I havent cried so much in any movie as I did in the Salman-Preity segment. My hubby finds my reaction hilarious.
2- The "episodes" were placed with perfect strategy! Sunny-Bobby episode was placed perfectly after Salman-Preity's. Its incessant, macho, action helped dry the tears of the former segment, and prepared one for the sad but sweet last segment with Dino and Mithun- oh our Disco Dancer has come so far, but is so cute and has so much pent-up anger- totally wanted to give him a hug :)
3- SO glad that the movie didnt conclude with Sohail and Vatsal joining the army- that would make less sense in context. But what DIDNT make sense was that Sohail, who looks terribly fit, is supposed to have failed the entrance exams- not buying it. He had physical fitness at his side, and that counts.
4- Best thing about the movie- no dissing the enemy. Patriotism is treated as a way of life, rather than a pill to swallow.
Posted by Shweta Mehrotra Gahlawat at 3:14 AM

Salman-Priety were good in the movie. I like the Punjabi style of the movie (as I am a Punjabi). Salman is one of my favorites.

A good song from the movie is 'Mannatan', which I love, and tranlated (http://thebollywoodlover.blogspot.com/2008/11/lyrics-and-translation-of-mannatan.html).

I've only heard good things about this movie; I can't wait to see it! I've read that Preity and Salman are great esp.

BollywoodLover: Yes Mannataan was indeed amazing. It was a good movie overall- not perfect, but no major flaws.

Ajanbi: Make sure u have plenty of tissues on hand to cry into- That entire Salman-Preity episode was heartbreaking.

I can't stand Sohail so was going to give this a miss...but maybe I'll do the DVD thing :-)

memsaab: you may want to then fast forward through the initial Sohail scenes, which are annoying (I took a walk), but establish the character- his later scenes are just integral to the mini stories, so cant b helped, and he was actually pretty moving in the last story w/ Mithun (Sohal! moving? :O) :)

Mithun was always a good actor - his debut effort (Mrigaya) won him a National Award! Unfortunately, he's done sooooo many bad movies that nobody remembers that anymore. I liked him in Guru, too.

I was planning to give this a miss because of the overdose of Deols and Sohail Khan, but might do the DVD thing like Memsaab. Nothing like a FF button for watching a movie. :-)

I really wanted to like the whole movie but i just couldn't, probably the Sunny segment ruined it for me. I loved Mithun in this movie, the whole "I hate you son" was soo BARSAAT CRY-inducing it was almost like Yuvvraaj for me, crying one minute and eye-rolling the next
Preity and Salman's were sad as well though Salman's punjabi accent was terribly funny!

Bollyviewer: The DVD thing would be totally perfect. The cast is SO varied in their acting that the FF button is super handy!

Rum: Salman's accent was hilarious! But but it was all so sad that I ignored it and just continued to cry :) The Sunny segment I would have normally found terrible, but after the recent Bombay attacks, I am cool with most patriotism, even if it involves overacting (Sunny) and Bad acting (Bobby) :D

Whaaat?? how could I have missed this one?? Man, I need to get a life and get with it. I live on an island you see...I'm serious. :D

You're making my *must watch* movie list longer and longer y'know.

Trupti- hehe I know u live on an island- and a v cold one at that! Wait for the dvd on this one- so not worth cinema time.