Title: Yuvraj
Year: 2008
Cast: Salman, Katrina, Anil Kapoor, Zayed Khan.
Dear Salman:
You know I am a devoted fan- so do not think of this as a critique- think of it as merely good advice.
I realise Subhash Ghai was heavily indebted to you for coming to his rescue when no one else did. I am assuming this is why Yuvraj neglected pacing, narration and editing in order to be a paean to you. But you should have known better- you should have told Mr. Ghai that allotting tons of screen time to you and you alone wouldn't make Yuvraj a better movie.
For the first hour or so, you were front and center- but not always in a good way- somehow the bantering between you and Boman appeared meant for a much younger man, barely out of his teens, so you felt somewhat miscast there. And the newsboy cap was fine 10 years ago, but now looks dated, since it reminds me of you back then. Wardrobe revamp maybe? Though honestly, you and Katrina looked picture perfect, and "Dost" was lovely.
Anil was finally trotted out an hour into the movie, and didn't even have a dialogue to his name until almost another 1/2 hr! And the song-writer girl thrown his way in the end- where was the romance? He might as well have ended up single- not everyone has to "pair up" in the end you know. But this wasn't your bad.
Zayed wasn't even allowed into the hospital as you waited anxiously in the end for Anil. So the less I say about his screen time the better.
[Sigh]
Maybe you (or anyone else) could have bought to Mr. Ghai's attention the pacing and editing of the movie- it really needed to be tighter. And maybe someone should have also looked at the script again- it felt like a sequel to Om Jai Jagdish.
I am so sorry this didn't work out.
____________________________________________________ 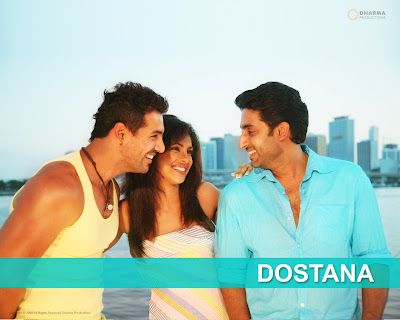 Nope this was not Bollywood's answer to Brokeback Mountain, as the director's interviews have suggested.

All this movie does towards awareness of homosexuality is define it, and that too badly- which in itself isn't necessarily a bad thing, since at least its existence, though humor, has been conveyed to the masses.
So yeah, my 80 year old aunt in India, if she indeed watches this, now must know that gay folks exist :S

10 minutes into the movie, and we realise that this is simply "Three's Company," switched around and Bollywood-ized. And that that is a bad thing at all either.

We were laughing through the 1st 2 hours of the movie, which was a marvel of humor and comic timing, after which the conclusion was only saved by the fact that Abhishek and John weren't awarded consolatory females.

Highlights:
1- Abhishek, Kirron and Boman's comic timing- utterly brilliant, incomparably great.
2- Not sure whether John was prettier or Priyanka- :)

Quibbles:
1- Hated the fact that Boman and Kirron left the screen after barely 1/3rd of the movie- why??? I want more Boman/Kirron :B
2- Umm can Priyanka's character be more dense? She has been fending for herself for years and still has no intuition?
3- What was the point of the kiss in the end??? Just to show that men can kiss too??? How is that at all funny???? whatever.
4- This is purely a personal quibble- I'm a bit tired of Abhishek's scarf and general grunginess. He doesn't look good without the beard, so keep that, lose the scarf, and tweak the styling.
Posted by Shweta Mehrotra Gahlawat at 9:03 AM

I completely agree with the Yuvraaj post, it just plain sucked, and I have never cried and hated a movie so much as this one, all coz of my Anil!

Aaaaww girl. I'm sorry to hear about Yuvraaj!!! :( We both are Sallu fans and for you to write that was just heart-breaking!

About Dostana - I completely agree! I haaaated Priyanka's character as I mentioned in my blog! Urgh! But I think John is prettier. :) I like Abhi with stubs but agreed that was too much for me too - the beard could've been trimmed.

LOL on "Not sure whether John was prettier or Priyanka- :)" I had that same feeling about Hrithik vs. Aish in Jodha Akbar.
All the best!
Sita-ji

Your reviews sound way more fun than the movies are likely to be. I hope Ghai listens to you - he's been churning out so many of these bad ones in the last couple of decades that I was amazed when I realised he made Karz which really was fun!

And I am with you on more Boman and Kiron - cant have too much of either of them!

Rum: I tried to be strong and power thru it- for Salman in my case- :S- just kept wanting to shoot myself in the head :)

Nikki: Totally! but then it looks like she LIKES playing bimbos- read an interview of hers where she said that she would stay away from any more aitraz-type characters, and do sweet (=dumb?) ones instead. On Abhi: lets kidnap him and give him a makeover :D

Bollywoodfoodclub: Thanks! Yup- JodhaAkbar tore me that way too- but my vote went to Hritik :B

Bollyviewer: Seriously, you raise a valid point- he has made some amazing cinema. I guess it boils down to who reinvents themselves and to what extent. Boman & Kirron: felt totally bereft when they went off-screen- boo :(

You didn't like Yuvvraaj? I am shocked at people not liking it (as I am a Salman lover). It was a good movie with a litlle emotions in the end.

The Bollywood: :B yup- couldnt reconcile myself to it at all. I adore salman, but he really needs to be a bit more selective in what he does.

I've had this feeling about Salman for the past couple of years that he really doesn't care anymore. He's phoning it in in almost every film and I don't know why. He needs to take a break imo. If painting is where his heart is at these days then there's no shame in retiring at the height of his glory rather than declining into rubbish the way he has been. Sigh.

Re: This is purely a personal quibble- I'm a bit tired of Abhishek's scarf and general grunginess. He doesn't look good without the beard, so keep that, lose the scarf, and tweak the styling.