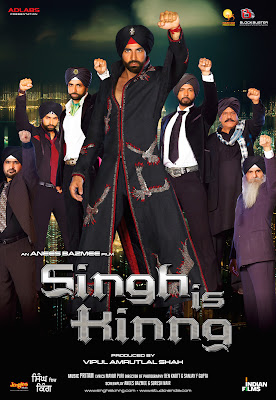 I am so so conflicted in my opinion on this- primarily because I found it awful in parts and really funny in others! Therefore I am simply going to divide it into timelines....

The 1st half hour: Akshay is Happy Singh, a simple, decent guy in what seems like a village of idiots in Punjab. Strangely, the entire village is Sikh and stupid- maybe the director only intended this to be funny, but I couldn't get a laugh out. I am not Sikh and strangely have no close Sikh friends, but when one sees a entire village of idiots, all of 1 community, it DOES feel that that community is being made fun of. Which is how I felt. The 1st song, featuring Akhshay dancing at a villager's wedding was horrible, but my husband tells me this is a fairly typical Punjabi song- that may be, but should the director have assumed that non-Punjabis and non-Sikhs would see the movie, and believe that this song, that sounds very insulting is meant only in fun? I will stop the rant now and attempt to channel my inner Gandhi.

The remaining 2 hours or so: Akhshay is sent to get Lucky (Sonu Sood) back from Australia, where the latter has turned into a gangster. Now that the script has provided the hero with a real mission, the movie becomes well paced, funny and fun. Too many songs, but that I can accept- it is Bollyland.

In his quest to take back a reluctant Lucky, Akshay befriends Kirron, falls in love with her daughter (Katrina) and becomes the romantic rival of Ranvir (it seems to me that this guy is everywhere! He is doing a lot of work, some of it pretty good). He also attempts to convince Lucky's gang, all consisting of Sikhs into leaving the gangster business, and coming back home to Punjab- this is NOT offensive, and a lot of fun

Sporadically through the movie: Once every 20 minutes or so, we get a little insert of a heart-warming-type incident, which is I guess supposed to give us warm fuzzy feelings about humanity, Sikhism or Akshay- take your pick. None of these little scenes lasted more than 5-10 minutes (at max) but bored me to tears just the same.

Not so much: Not enough Om Puri. And I am still not impressed by Katrina- very very pretty, but cant speak or act- reminds me of Priyanka Chopra in that regard.

And in Conclusion: Not a bad movie, but of course not a classic for the ages (could we even expect it to be?) But wait for the DVD and watch if you have a spare few hours.
Posted by Shweta Mehrotra Gahlawat at 8:43 AM 12 comments:

There is no real line separating independent and commercial cinema in Bollywood, especially since independent movies are getting glitzy....The 2 discussed below are decent "time pass," despite their shortcomings. 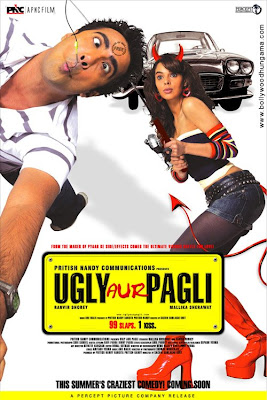 We've all hear this is a remake; the Korean original is also being remade in Hollywood, with the assistance of the original's director and is due out later this month in North America.

Ranvir meets a very very drunk Mallika late one night and chivalrously brings her home. In the process, he falls in love, but she keeps him clueless about her feeling, while putting him through hoops- involving cross dressing, petty thievery and the like for him :) How does it end? Its Bollywood- what do you expect??

Pros:
1- The chemistry between Mallika and Ranvir is surprising, and very very effective! So much so, that it almost overshadows the copied script :B
2- Sushmita Mukherjee is brilliant as Mallika's mom [heart] 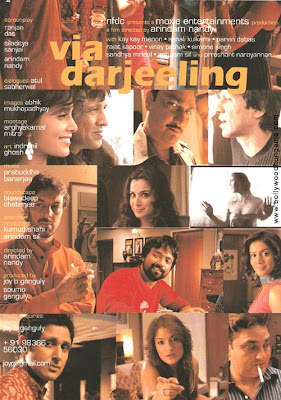 Kay Kay and Sonali are honeymooning in Darjeeling- and on their eve of their departure back to Calcutta, Kay Kay disappears.

Where did Kay Kay go? Vinay is the inspector of police assigned to the job, but as we find out years later when he is recalling the incident to a party of drunk friends (Simone, Sandhya, Rajat, Prashant), Kay Kay was never found.

So what happened to Kay Kay? Each of the 5 at the party contribute their own theory- but you have to wait till the very end to get an idea of what the truth may have been- or what you think it is.

Pros:
1- The "mystery" factor works.
2- Every actor plays their part fully and well- no one is holding back any punches here.
3- The background score is fabulous, as is scenic Darjeeling and the cinematography.

Cons:
1- I like my mysteries properly solved :D
Posted by Shweta Mehrotra Gahlawat at 8:57 AM 12 comments:

POST REVISED SINCE 08/11/08 for additional movies suggested
Everyone had such great thoughts on movies they loved and found comforting/relaxing/fun to while away time to, that I figured rather than responding in the comments section, I should simply compile a list of suggested movies, along w/ the number of people who love them :D You can find out who loves which by going here.

Jab We Met has now tied with Chupke Chupke- I still skeptically wonder if I did another poll like this 10 years from now, would JWM stand the test of time? It may, what with the charismatic cast..... The fact that we all still love CHupke Chupke is but a testimoney to the brilliance of Hrishikesh Mukherjee, his brilliant castings, everyman scripts and the resulting clean, consise product.

Here is the list of movies suggested by everyone, along with the # of votes each got. In retrospect, there are so many of these that you've suggested that I wish were on my original list- Andaz Apna Apna, DDLJ, Chalbaaz, Jugnu.... ah well :)

I love this list- I think this is a really great point of reference. Thanks everyone! 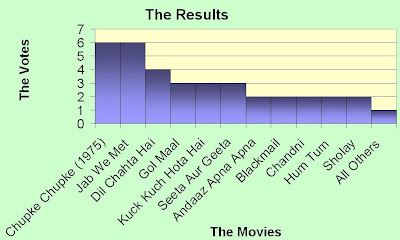 Posted by Shweta Mehrotra Gahlawat at 11:24 AM 8 comments:

Nope, NOT movies about food/eating/mac 'n cheese per se.

But we all have our fav movies that we can watch over and again- not think too hard, just lie back, lazily cheering from the couch. These are movies that just make us FEEL GOOD, and happy and satisfied, without any huge reasons or motivations.

Which Bolly movies make you feel that way?
I want to know, so that I can compare notes and watch 'em as well.

Notice that I didnt put down "Top 5" or "Top 10"- this is a list of movies that just meant to comfort, sans pressure.
Posted by Shweta Mehrotra Gahlawat at 1:31 PM 15 comments: Don’t believe it is 2 words? :D Check out the credits: Kailash (Dharam) has inherited his dad's business, and owns power plants, and therefore has lamps lit during meetings to emphasize the fact (?!)... Dr Khurana (Madan Puri) is researching solar power for Kailash, but instead of working in a physics lab, his experiments seem to be chemical in nature. He also favors a bright yellow fluid- liquid sunshine anyone?

Kailash's rival Mr. Mehta (Iftekhar) meanwhile lives in another part of town. His daughter Asha (Rakhi) is engaged to one of his employees, Jeevan (Shatrughan). The happy couple sing and dance, while looking suitably hip (this has to be one of Rakhi's hippest avtars ever)! Jeevan seems to be following a different thought pattern though- he talks to Mr. Mehta is the latter's living room, which is decorated by battery operated torches (!!!!) and car batteries :D He suggests that Mehta regard Kailash as a suitable boy for Asha, since Kailash is going to be the next big thing soon. He assures Mehta that he is doing this for the welfare of Mehta and Asha, and will even help Asha hookup w/ Kailash. Iftekhar happily agrees! Turns out Kailash and Jeevan are best friends and drink beer together in flowery china beer mugs often. Introducing Asha to Jeevan is as easy as pie (in fact how come she wasn't introduced to Kailash earlier? Best male friend meeting GF is normal, no?) While Kailash begins to dream of Asha (Jeevan hasn't mentioned Asha is his girl- merely a friend), Dr. Khurana manages to rein-in solar power: in a sequence meant to simulate Archimedes' Eureka! Pretty soon, Dr. Khurana is famous internationally, as we learn from various newspapers which have Khurana's photo very obviously and tackily glued-on on top. Evil people all over the world want to get Dr. Khurana's secret plans describing harnessing of said solar power. They converge to Kailash's town, and meet with Jeevan, who is more evil than we originally thought. Their choice of a meeting spot? A golf course in bright daylight, with all the henchmen wearing cool outfits... Meanwhile business is booming for Kailash, as he begins to romance Asha. An Asha begins to get attracted to Kailash (who wouldn't?), as we see in "Pal pal dil ke paas..," where Rakhi looks the prettiest she has ever been.

Asha is confused, more so by Jeevan's behavior, as he continues to push her towards Kailash. He explains to her it would be better for her dad if she married Kailash, and himself disappears from town. Asha proceeds to have a discussion with her inner self, which scene is highly reminiscent of Sharmili. ... only for Jeevan to come back on their wedding night and ensure that Kailash knows of his past relationship with Asha. He does have a soft spot for the girl, but has had to orchestrate this wedding to suit his own nefarious plans...... ... and we are made aware of these plans as he begins to blackmail Asha- with doctored-up pix of them, threatening to send them off to Kailash if she doesn't steal the solar-power plans and give them up to him. Asha tries to think of a way out, while Kailash continues to suspect her in their Ert'e-esque living room... In a surprising move for Bollywood as we know it, Dr. Khurana comes to Asha's rescue! He coaxes her to confess her troubles to him, and when she does, he successfully gets her photos AND negatives back after throwing fake plans at the villains. When Jeevan in his pink 'n orange hunky outfit realizes he has been played... But now SHE is kidnapped by Jeevan (rofl- oh someone stop this merry-go-round of kidnappings...heeh) Can Kailash distract himself from his gold wallpaper long enough to rescue Asha? Will Jeevan, despite making silly phone calls to Kailash (to be received on this very groovy phone) be able to steal the plans? Above all, will the international gang of baddies steal our sainted woman (Rakhi) and solar-power plans which were formulated from chem-lab experiments and yellow paint??????

Pros:
1- Shatru and Iftekhar playing bad boys- they've done this very seldom, so any chance I get to catch them at it, I am in glee.
- Madan Puri as an adorable good guy- this like #1 is fairly rare (he was a good guy in Alibaba too though), which was fun.
4- Rakhi and Dharam wore cool outfits, but Shatru's fashions rocked.
5- I really liked that the heroine is shown to have some brains and a spine- while she DOES sob and weep, she is smart enough to fool the villains and rescue children :)

Cons:
None! The mediocre 70s sets enhance the fun of the watch, not detract from it in the least.

Now I gotta go buy me some gold wall paper...