Just in time before Rekhtober ends this year! 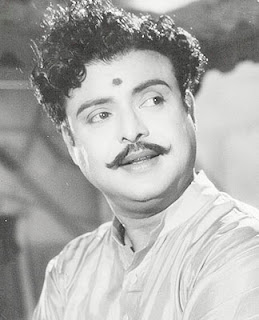 Ramaswami ("Gemini") Ganesan, also known as Kadhal Manan (lit: "love king"), was a wannabe doctor, who just happened to become one of the greatest actors in Indian cinema. 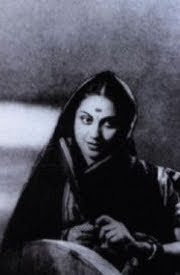 Gemini next married Pushpavalli, also an actor, with whom he had two more children: Bhanurekha (or "Rekha") and Radha. He never acknowledged the wedding, and acknowledged Rekha much later, when she was an established actor herself. Radha's son, Naveed Ozman is trying to become an actor. I think Pushpavalli was so adorable looking!, plus it sounds like she was a pretty free spirit- didnt get cowed by Gemini, and instead of moping, took off to Mumbai to have Rekha join the movies. Also, Bhanurekha sounds way cuter than Rekha! 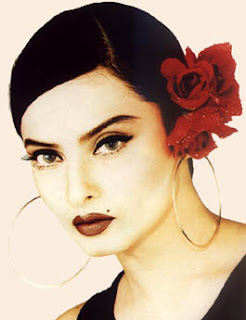 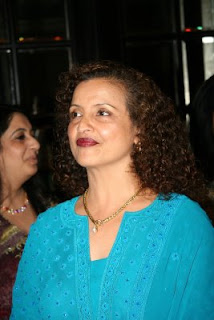 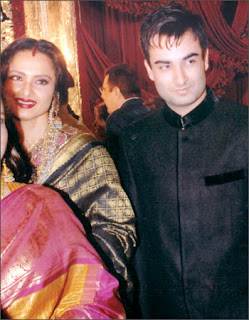 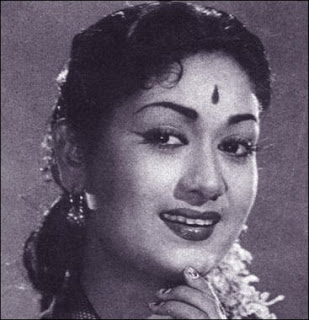 And yes, Gemini married yet again, Savitri (another gorgeous woman), also an actor, with whom he had two more children: Viajaya Chamundeswari (Fitness Advisor, GG Hospital, Chennai) and Satish Kumar. 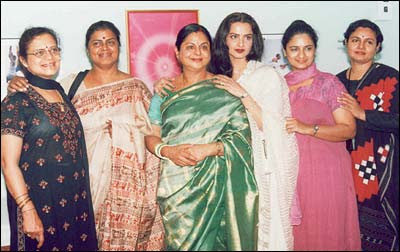 Meanwhile, Rekha has married a few times herself;
first to actor Vinod Mehra- the wedding an divorce were apparently both hush-hush. Even when the end came, it must have been super amicable, because she seems quite at ease with his wife Kiran and daughter Sonia after he married again. 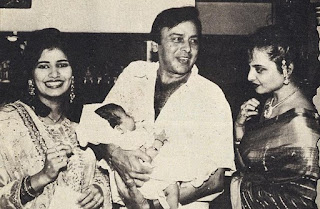 Incidentally, Sonia grew up quite pretty, and is also trying to be an actor:

Next, we do know she married New Delhi businessman Mukesh Aggarwal, who committed suicide in a matter of days after the marriage. 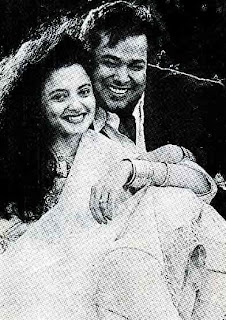 Her alleged affair with Amitabh is open to speculation, but it appears pretty certain that she is in a relationship with her secretary Farzana (lucky Farzana!) 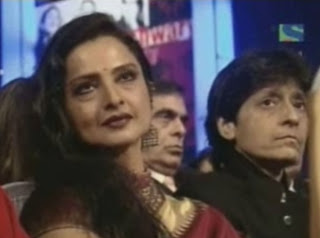 Posted by Shweta Mehrotra Gahlawat at 11:25 AM

Loved this rather bold write up, i had heard about Rekha and Farzania myself but i wasn't sure if it was a rumour or not

Bollywooddeewana: thank you! i think its pretty obvious, but no one ever seems to talk about sexuality in Bollywood. The news media tends to capture and show all of Rekha and Farzana's pix together, but no one has ever come out and said it outright- some kind of weird respect/taboo/whatnot. The media is like a bunch of old ladies ignoring the elephant in the parlor, while continuing to sip tea and gossiping about everything else under the sun.... :)

Rekha and Big B totally had an affair. Don't have any hardcore proof, of course, but my usually reliable gut tells me "YEAH!"

Oh, and Rekha is totally bi. I can feel it. Plus, she's a Libra, the so-called "bisexual sign". (Not saying every Libra swings both ways, but many of the ones I've encountered do/have.)

Lapetitediva: I do agree w/ you that AB & Rekha had an affair, per all the documentation on it- like you say, nothing concrete, but enough. I think its cool she is bi- more power to her :)