2009 turned out to be a great year for Bollywood- a surprising number of very entertaining movies came out. Here are the ones that stood out for me, for the better and for the worse.

Movies that delivered (for me at least- some of these may not work for u at all):

Movies that stopped just a decimal away from delivering (for me at least- you love/hate some of these):

Movies that did not deliver for anybody (I'm fairly certain):

Santa bought me something for christmas....

Santa officially lives at http://shellsbollyworld.blogspot.com/, who sent me fuzzy, huggable Abhay for Christmas....

And also, a much forgotten Steve, our favorite mailman-turned-comic... 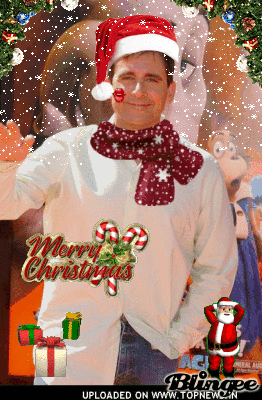 But this was the best gift of all- a fab video that had me smiling like a fool every time Dharam ji and Abhay came on... omg seriously amazing!

Thank you secret Santa! blog on!

Posted by Shweta Mehrotra Gahlawat at 10:40 AM 4 comments:

In between moving back to my house (long story), dealing with contractors (longer story) and managing a mixed bag of non-anticipated catastrophes (so many stories), yes, I have been watching Bollywood. This is the 1st mythological being covered on this blog! And while I usually laugh at the tackiness of mythological productions, this was truly worth watching and writing about.
The movie picks up after Ram (Prem Adib, NOT Chandrakant- IMDB credits BOTH actors with the character's portrayal) and Sita (Shobhna- glowing, and extremely beautiful) return to Ayodhya, and are pregnant. The scriptwriter, Kanu Desai, makes subtle adjustments to Valmiki (the ascetic and poet)'s Ramayana, and introduces empathy to Ram's darkest hour. Per the film, Ram asks Sita to leave only owing to public pressure, after a informal vote by the general populace, and in the end, when he again meets Sita after Luv and Kuch are grown up, doesn't hesitate in begging her to come back. Sita being swallowed by the earth is portrayed to be her own wish. Yeah right.

Along with all the debate that the script has potential to spark, watching it before the release of Ravan next year, offers much food for thought. In the very least, the woman's portrayal as the ever-sufferer gets grating, no matter how lightly one watches the film. While Prem's and the other actors' portrayals are theatrical and typical of the times; Shobhna is very natural, carries the movie, and makes the movie a must-watch. Some very decent music, and I did not fast forward through the movie once, which fact speaks volumes.Vijay Bhatt's direction is definitely progressive (despite the potential cowardice of the script), and I particularly enjoyed the opening credits.
Verdict- One of the few well-made mythologicals ever. Watch.
_____________________________________________ 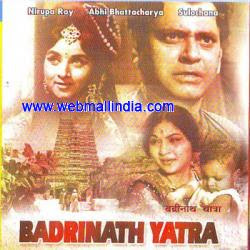 The 2nd mythological to be covered on this blog- and believe me, I watched both in the same fortnight (what's up with that???) However, Badrinath Yatra does not compare to Ram Rajya. It is describe as a crime movie/thriller at IMDB, which is hilarious; this is social cinema of the most ponderous sort.

The movie opens with Devdutt (Abhi) going to jail for some random crime. His mom bails him out with her pilgrimage money, and is therefore unable to make her own visit to Badrinath. Devdutt isnt perturbed- he visits a prostitute, Chandravati, and ignores his family and his pregnant wife, Sheila (Nirupa Roy). On Chandra's insistence, he blinds his mother (!), throws out his parents and brother, lives in with Chandravati and has Sheila work as a maid in his house. Will everything every work out??? Will Devdutt repent??? Could this story get any crazier???? The movie has to be seen to be believed. 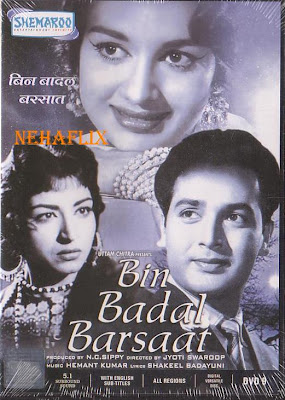 Title: Bin Badal Barsaat (Rain without clouds/an unusual occurrence)
Year: 1963
Cast: Biswajeet, Asha Parekh, Nishi, Mehmood
This is a post of many firsts... Biswajeet too has never been covered here. This has primarily been because I really do not like the man, but I love thrillers, and he has appeared in more than his fair share, so our paths cross often.

Biswajeet is the local landlord in a small town, who (Biswajeet, not the small town) falls in love with the local doctor's daughter, feisty Asha Parekh. And they are due to be engaged, when Biswajeet discovers Nishi, literally a blast from the past. Nishi is the local gypsy girl. Apparently Biswajeet's grandpa loved and ditched Nishi's ancestor. Ergo, Nishi must marry Biswajeet in this lifetime. But Biswajeet refuses, and goes and marries Asha, and Nishi promises to avenge herself and kill Asha/Biswajeet/both.
[sigh] Of course things dont work out quite that way- its a Bolly movie. Asha's brightness cant save the movie, whose promised thrills come off extremely lame. 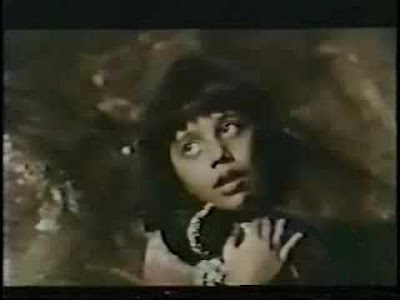 My fears were quietened when I saw Manmohan Krishna and David Abraham in the credits- with those two around, sleaze couldn't even touch the frames.

It turned out to be a sweet a sweet, though highly melodramatic watch. Honey Irani (who'd grow up to become a very accomplished writer, marry Javed Akhtar and give birth to Farhan and Zoya) stars as the orphan child who is adopted by Nishi (again!) and Shreekant, a childless couple. They are very happy with her, as is Nishi's dad, David and the orphanage warden Manmohan. However, Nishi's mom Manorama isnt pleased, and does her best to put down the child as often as she can. Things go from great to terrible really fast once Nishi has her own baby; while Shreekant still loves and supports Honey, Nishi basely ignores her, and Honey finally runs away from home. Did Honey ever find her way home? Did Nishi realize she loved Honey after all?? Did Manorama see the light??? Well- yes and no.

Verdict- If you don't see this, you aint missing much. Besides, I already did the job for you :D