I was tagged by The Banno (http://batulm.wordpress.com) more than a week ago, and I've actually spent a lot of time timing about this- ten things I have wanted or done which my gender is not supposed to. Its a challenging post, because norms mutate every few year or so, and as an Indian woman in the USA, there are tons of suppositions, cultural baggage and what not flung at me. More than what I am NOT supposed to do, there are way too many things I am assumed to be. Since this IS a blog dedicated to cinema, I used Sridevi's characters as examples. So here goes:
There's probably more where this came from. 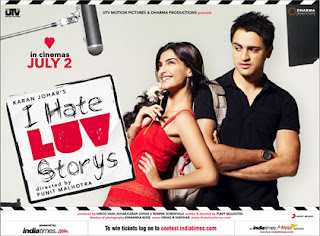 The best part of the movie has to be who I saw it with, a really fun group of fellow bloggers and tweeters: Cynthia, Jessica, Valencia, The Bollywood Fan and Joe. The company unfortunately was far better than the movie could ever be. Which sounds ominous, but it really isn't- its not a bad movie, but not memorable; a fact that could have been avoided... but I'm getting ahead of myself, first- the story!

Imran has let his home in Long Island, NY to be part of Bollywood. He is one of Samir Soni's numerous assistants; Samir being a director modeled after Karan Johar, maker of numerous weepfests/lovesfests/Bollywood sagas. In comes Sonam, who is the art director; Imran gets assigned to help her, and like all the love stories ever, they argue first, and then eventually fall in love. She proposes first, he balks. Then he proposes and she balks. And then they both figure it out. And thats it.

The pros:
The cons:
Conclusion: A movie to be seen only with pleasant company- alone, it would be simply a sad fail.
Posted by Shweta Mehrotra Gahlawat at 12:28 PM 10 comments: