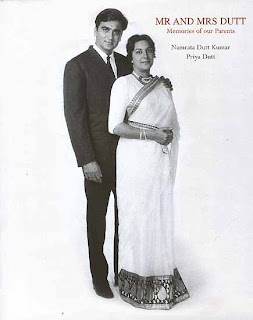 Mr. and Mrs. Dutt, while intended as a biography of Sunil and Nargis Dutt by two of their children: Namrata and Priya, is essentially a collection of family photos and anecdotes, and should be regarded as such. It is a paean of love by two daughters for their parents, not a critique of their cinema, lost loves and miscellaneous gossip.
And the book is a gem for that very reason. It presents a treasure trove of copious numbers of family pictures, which are completely delightful, and a rarity in most books related to Bollywood. We get a brief synopsis of the familial backgrounds of Nargis, the "sophisticate," and the humble Sunil, their brief courtship, their beautiful years together and the seeding of Ajanta Arts. We get a window in the formative years of Sanjay the actor, Namrata the gorgeous socialite/homemaker, and Priya the dynamic politician. Both sisters speak directly to the reader and often use quotations from Sanjay and Kumar Gaurav (the actor, Namrata's husband, Rajendra Kumar's son). 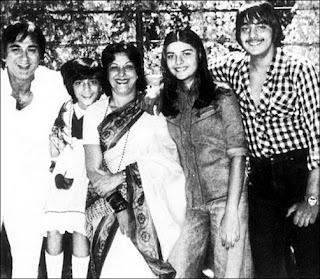 The book works on an visceral level- the daughter's love for their parents will tug at the heart of the most hardened cynic, particularly the pages covering Nargis' illness and Sunil's agony following her decease. It is easy to empathize with the Authors' pain and their attempts to reconcile with it. It is also easy to believe in this magical world of family love.
Yet, read the book and sleep over it a few days, and some matters spring easily to mind. There is no discussion at all of the Raj Kapoor-Nargis relationship- their cinema gets but a single sentence of reference. It is hard to believe that the Authors have no opinion on that subject, and were so shielded from gossip. The Authors do admit that they have never taken much interest in their parents' cinema owing to the jealously they still feel when their parents romance onscreen- to them, they were just their mom and dad. Similarly, Sanjay's misadventures with the law, drugs and women are discussed concisely- almost impersonally; they couldn't completely gloss over those if they wanted to discuss his life at all, and this must have appeared the best way out. Finally, Sunil and his ideas, I felt, were discussed more that Nargis, which leaves the reader feeling a little bit cheated. However, this may be only because of Priya's working with him in the political arena for a considerably long period of time; she obviously related more to her father in his later years and his second career, and therefore could speak to his personality and views during this time in depth. Indeed, for those of us who are unaware of his politics, the book certainly provides a sympathetic career graph of Sunil as a politician and his declining years. It does however make one yearn for more discussion on Nargis' career after her children were born.
Despite these and other gaps in narrative, the book makes for a delightful and engaging read, and is an essential buy for any fan- especially for those photographs that the Authors have been so generous with.

Go read it already.
Posted by Shweta Mehrotra Gahlawat at 1:39 AM No comments: