I saw this almost a week ago, and just didn't have the motivation to write about it. I felt a little bit cheated, a little bit victimized even :) All these are bad signs....

You see, I was born in Lucknow and brought up in Kanpur, Uttar Pradesh, India. Since 3 of 4 protagonists from this movie are supposedly from there, I take "Tashan" more personally than I should. And because they are all such "special" characters, some tiny part of me feels offended. Lots of spoilers here, so if you are waiting to see the movie, don't read any further. 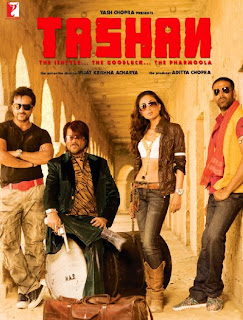 Jimmy Cliff (Saif Ali Khan), works in a call centre and teaches English on the side. He gets hired to teach Bhaiyyaji (Anil Kapoor) proper English, and falls in love with Bhaiyyaji's secretary Pooja (Kareena Kapoor). 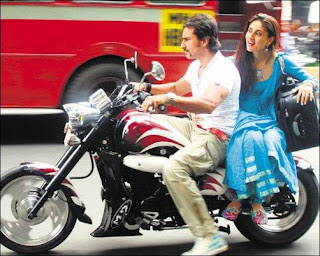 Jimmy and Pooja steal Bhaiiyaji's money and run away- only Jimmy gets conned by Pooja, who runs away with all the cash.

As the icing on the cake, we find out that Bhaiyyaji is a big-time don and will stop at nothing to get his money back. He is from Kanpur, and calls over one of of the thugs from his home town: Bachchan Pande (Akshay) to catch Jimmy and Pooja. Jimmy is soon caught, and the two head off to Haridwar, where Jimmy believes Pooja may be, to perform her dad's last rites. Don't look for the chemistry from "Main Khiladi Tu Anadi"- its not happening here. 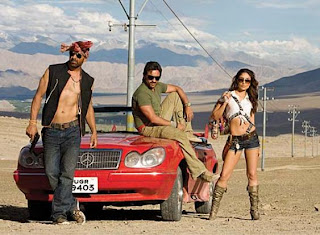 They find Pooja, Bhaiiyaji comes over, and they set about recovering the money- she has hidden it in various places in India (when she had the time to do all this, we do not know). During this journey, Bacchan and Pooja discover that they are each other's lost childhood love, and Bacchan lets Pooja go, taking the money bag back with him to Bhaiiyaji. 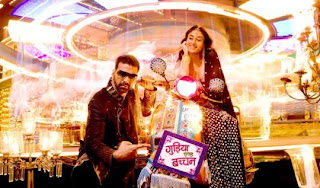 What he doesn't know is that Jimmy had replaced all the cash with stones. At Bhaiyyaji's lair, Bacchan is beaten black and blue. Will Pooja and Jimmy come back and save Bacchan? Who will Pooja end up with? What is Bhaiyyaji's fate? Do you care? You do? Why???

Pros:
1- Akshay is beautiful. He just is. The costumes work for him, the dialect works for him. I've really begun to like this guy. He aint the best actor, but very charismatic.

Cons:
1- None of the characters, save for Bacchan, evoke any empathy. I think its a bad sign when while watching a movie, there is nothing and no one I can root for.
2- Saif looks terrible- just v v short. I do not know what Aki was thinking, but all the costumes he has provided for Saif make the latter look tiny. Esp where he shows up with Kareena, who looks statuesque in comparison.
3- Kanpur is made to appear as a small, poorly educated township. That was true maybe 10 years ago. Oh I dunno...Its only a movie- I shouldn't care.
4- There is no chemistry between either Saif and Kareena, Saif and Akshay OR Akshay and Kareena- maybe some between Akshay and Anil- tsk.
5- Its not necessarily a con, but- Anil looks decent and acts ok- but is that enough? Its just insufficient when the best comment you can come up with about someone is that they are satisfactory, and no more.

All in all, this could have been so much better than it was.

Not at all surprised that this one was disappointing. After Jodha Akbar, Welcome and Race I have totally given up expecting anything good out of an over-hyped big budget movie. Thanks, for the review Shweta. Sounds like an eminently skippable movie.

oh gawd,that's it for the movie??? i expected much more...so much more.
damn.

It was definitely disappointing for me- maybe other folks have a different experience? :)

ak6 kumar was awesome. Overall the movie could have been made with a tighter, focussed script (and no story) as a comic book adaptation.

Anil Kapoor's character was not sketched correctly. It was all about botched up English and nothing else at all.

Saif role was poorly written. Kareena's voice ok but mostly she looked as a caricature of herself.

Some places are authentic as I saw a billboard in a frame at the background with pin code as 2008001. Probably near Nayee Sadak? Any guesses. The ghat seemed made up, they could have had better scenes in parmath.

(Any points for guessing where do I belong to? ;))

I'm not surprised either. The advertising made me think of an overhyped Hollywood film, and you know how bad those can be...

You are right memsaab- but I had been hoping it'd fall in the "so bad its good" category- I learnt the hard way! :D

So you are/have family from there Quark? What part?
I didnt notice the pin, but 208001 comprises a fairly large area, including Kanpur West and Chowk. The ghats were defnitely made up, as were the galis. Anil's rikhshawalla outfit was v apt in a Kanpur/UP context, but that was about it; and yep, v sketchy characterization overall.

Yes, I was born and brought up in knp. Lived earlier in swaroop nagar and now vishnupuri (near nawab ganj). The language was not the typical Kanpuriya or even our side of UP.

Vishal Bharadwaj had done a better job in Omkara with western U.P. dialect.

Bunty & Babli also had scenes from Knp, the beauty contest shown early in the movie is not held actually in lko but in CSA University campus in HBTI it is next to my house :)

This is weird! My ancestral home is in Vishnupuri- rofl- such a small world. :) good to meet u here.

the PPCC is a big fat idiot said...

They were HUGE! They WERE!

So I belted out a long response and it vanished! yagh! and rofl!

I've been avoiding thinking about the man boobies- I mean- if he has to debase himself, y drag my poor town into the picture? :B

Its refried masala all right- thing is its a bit too burnt in its refrying- maybe if they had focussed on the plot a bit more than the glitter, it'd do better :) The 70s had masala, but they didnt shortchange the plot, I think!

I'm really bummed that this movie did as badly as it did, although from your review it sounds like it didn't deserve better. Mostly I was hoping an interesting character like Pooja would be in a successful film, so that maybe it would inspire a few more like her.

love that Tabu header there..where's that from?

Its Tabu doing the Telegu "Idi SAngati"- the movie bombed, but i love her so very much! Saw Krazzy 4 awhile bk- http://apnieastindiacompany.blogspot.com/2008/04/4-howlers.html

Shweta,
It's official. I won't be seeing Tashan anytime soon--Unless I happen to get conned by the lady at my local grocery store. She has a way with getting me to buy her movies(that's how I ended up with disasters like "Hum" and "Heyy Baby" in my collection).

I'm glad somebody finally brought up Saif's recent look...I don't know what it is, if he's maybe been buffing his chest up too much or what, but he HAS been looking incredibly short. I noticed it in the promo shots for this film and also on the cameo in "Om Shanti Om". What happened? He looked so crisp in "Kal Ho Naa Ho" and so well proportioned in "Salaam Namaste".

Give me Shahid Kapoor anyday.

Akshay is beautiful, I agree, but (spoiler alert) look at his teeth. They are sort of small and the eye teeth, those are so much like mini fangs. Semi rat teeth. Still very hot though.

OK, I didn't notice the man boobs, but I LOVED how they did the super orange spray on tan for Anil. I thought that was a nice, funny touch.

rofl- yep he does have fangs, innit? :) and they reaaally pop when he smiles :D
I never realized Anil was sprayed up- in fact, i kept feeling he needed a shower :B ggl

Nida- Heyy Babyy (I can never get the # of albhabets right in that weird name) was truly horrible- Hum was just braindeadly silly, no? :D
I really beleive that Saif just worked out too much. In DCH, he comes across as fit, but lean, but by Tashan, he seems to just have become BULKY and way too wide (what I call the Sunil Shetty phenomenon). He isnt a tall man to begin with, so the extra width isnt helping him at all. SRK, on the other hand, worked out for "Om..," but didnt add bulk, which was a really smart move....but I digress :)

Well,I saw Tashan..but was really bored half way through…
The movie didn’t live up to the expectations of a typical Bollywood fan…like me.
Even, Krazzy 4 & Jannat were not that great…

So, not many good movies coming out of Bollywood lately..


Check this for proof:
http://www.youtube.com/watch?v=TJN1oOtEM-4

I went through so much trouble to watch Tashan.. fought with my bf.. since he didn't watch Race with me.. just to find out what a disaster it was.. am still making up to him by being dragged to every movie of his choice!!

Ashi & Payal- thanks for your comments- keep visiting! :D

I do agree Ashi that Krazzy 4 was horrible, and I refuse to watch Jannat categorically. Will def see Love Story- he MAY look like Hritik, but I dont really care, cos the movie does have a nice feel- but I plan to go in with zero expectations :)

Payal: so "much ado about nothing?" :D Tashan gave me a serious headache. On the plus side, I doubt any movie you are having to sit thru is quite as bad as Tashan ;)

Well said, Shweta! We ought to co-author a review some day =)

Oh, by the way, thank you for the tips on the theaters in the area. I am counting down to July 4 (less than a month away -- yay!) for Jaane Tu Ya Jaane Na...

u kno that sounds like a great idea. we could watch something in sync.
i am moving to the OC in a few mos time, and that may make trips to Artesia easier for me - naz 8 here I come! Also with all the new theaters the mittals have bought, there may b a chance that Indian movie may b even more accessible in theaters soon!

Cool! I shall e-mail you soon to discuss. I have yet to visit Artesia, but I'm saving that for a Saturday morning/afternoon when I have nothing else to worry about, to make it worthwhile. There are a couple of old Aamir Khan films I need to add to complete my collection of his filmography ;)

Good luck with the move upcoming. It's so refreshing to be here after almost non-existent Bollywood-scapes in Miami and Austin!