Recently, two horrible movies came out, both featuring actors with huge industry connections. Due to their ear-bleeding horrible-ness, I figured I could discuss them in a single post, to somehow reduce the pain :D Both movies are essentially a waste of time for everyone involved, including the viewer :) 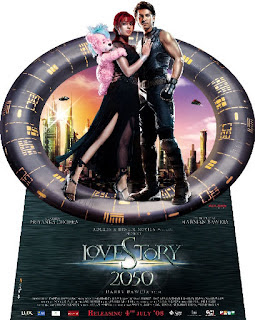 Harman plays a super rich, whiney young man whose dad is working hard to let his son live without working. However, Harman doesn't appreciate this, wants love, and doesn't help his dad at work, which he probably should have.

Harman meets Priyanka, loves and then loses her (how?- watch the movie). Via some REALLY idiotic reasoning, he figures the only way to get her back is to go to the year 2050 :S

Post interval, in 2050, we see Harry Bawja's interpretation of all that India can achieve in the next 40 years. In the next 40 years, the country will:
1- Have time travel
2- Flying: cars, trams, stadiums.
3- Terrible fashion sense- everyone will include a lot of silver in their apparel. People will also wear Japanese anime-style clothing from the 2000s- thereby still being technically 40 years behind the times in fashion.
4- Bombay will be remodeled to look somewhat like a NYC/HK hybrid.
5- The re-modelers of the city will borrow heavily from "The 5th element" , "I Robot" and "Star Wars," with a smattering of the Terminator movies.

As Banno mentions in her fabulous post on this, Harman is surprisingly efficient in Bombay, despite it being a different era and a new city/country for him. He wears a lot of Hritik-like clothes and dances a lot- but can he find Priyanka and get her back to 2008?
I just wish they would remain in the future.

Pros:
1- Harman is cute, and I feel he could act, given the chance. I have seen him in a you-tube interview, and he was surprisingly natural and non-Hritik-like. Hopefully he will stop doing movies with his dad, just be himself and revive his career.
2- Priyanka is lovely as always....

Cons:
1- .... however, despite all her loveliness, Priyanka does not move me with her acting at all.
2- Horrible dialogues.
3- Dilip Tahil (plays Harman's dad) is reduced to a caricature like cameo- awful awful awful.
4- That horrible pink bear Priyanka carries makes me want to brain someone. It is beyond ugly, and is dubbed by a grown man/woman/who-knows-what speaking squeakily. eugh.
5- Terrible editing. A lot of unnecessary time is spent in the 1st half of the movie, with a long and painful witnessing of Harman wooing Priyanka. That could have been cut by half.
6- Also as Banno says, Harman's passing resemblance to Hritik is exaggerated to ridiculous lengths. He could have been fine being himself, but since he dances and even wears clothes like Hritik (1 outfit is the same Hritik's from "Lakshya"'s "main aisa hi hoon"- even the same hair), its like clobbering the viewer on the head with the "Hritik"ness. 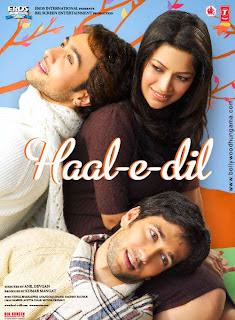 Kumar Mangat showcases his daughter Amita Pathak in this movie- the poor girl is not an actor by any definition, and neither are the 2 guys, Nakul Mehta and Adhyayan Suman (Shekhar Suman's son) stuck with her in this clunker.

Nakul is a singer who gets on a train w/ Amita and then earnestly begins his wooing, much to her apparent disgust. After spending 1/2 the movie aping "Jab We Met," they land up somewhere (Nainital? I forget) where we find her 1st love, Adhyayan has been dead awhile and she cant forget him. Can Nakul bring Amita around? Can she forget Adhyayan? Do you care? Why?

Cons:
Everything and everyone.

Thoughts:
I think I am extremely harsh on new Bollywood, and far far more forgiving if watching stuff through the 90s. For some reason, I hold the past 10 years to a higher standard, which may be somewhat unfair. On the other hand, technology has improved a lot in the past decade, and therefore I do not think it is so wrong to expect better product than we are being currently provided.

While the technology is here, it is either being used incorrectly (ie bad animation, bad effects), or if used effectively, then the basic plot, script and acting fall. Very few movies, seem to not fall in either of these 2 traps, which I think definitely affects my appreciation of new movies. Through the 70s, and even later, Bollywood used almost zero effects-ability and still delivered great products. Despite all the flubs, the "fun" element was never lost, but now I miss that.
Posted by Shweta Mehrotra Gahlawat at 9:01 AM

"People will also wear Japanese anime-style clothing from the 2000s- thereby still being technically 40 years behind the times in fashion."

ROTFLOL! I've been warned that LS2050 is like poison for your brains from other sources, but your review definitely puts the capper on any faint idea I had left of "so bad it's fun."

Thanks for the review--I already knew I wasn't going to see this based on the other bad reviews I'd read, but you've just sealed the deal for me...

You know, I'm so disapointed in Priyanka because I've seen about three of her movies now and each one has made me look back like, whoa, she's really pretty, but...that's it...And its just really frustrating because when I see her in interviews and such she comes across as really funny, humble, smart, interesting, etc. And then you see her onscreen and you're like eehh.

Clearly this was no exception. But then again, I'm not surprised. I just had a gut feeling this one would be a flop.

Thanks, Shweta for linking me. I didn't have the courage to watch 'Haal-e-Dil'. You are absolutely right, all that new technology has done is make our films drearier, everyone looks the same, and there is no fun left. Because I think in most cases, the story and script are submerged under effects, if they were there at all.

Ajnabi: It really had full potential to be "so bad its good." :S alas, it just numbs the mind -lols.

Nida: That is actually so true- she IS nice in interviews (i've seen like 1, but it was cool)- but so meh in movies...:/

Banno: I had to! I am pretty sure your post is the best thing about the movie :D I'm so sick of new movies right now- at some point, they HAVE to realise they need to get creative....but who knows- I just need a therapeutic 60s flick to unwind to :)

Just thought of this scenario where it is a cricket stadium, the batsman hits a six, and the ball falls to earth, and an umpire is teleported to land to search for it, because they want to stick by the same rules (major flaw in the film) so the bowler can retain the 30-over ball swing. Howzzat?! That could be a film on its own. 'Geind ki Talaash'!

Agree completely on most counts about new films. Although I think Ghajini will have some good, complementary special effects. Keeping fingers crossed...

Bollyfan: Trust me, wait for the DVD, then satisfy any curiosity while using your fast forawrd control :) And I do feel Ghajani will be fabulous- just because Amir would be super careful with any movie he is involved in.

LS2050 must be a great movie - cant remember when a movie has inspired so many interesting reviews! lol I am actually begining to feel quite sorry for poor Harman Baweja. :-)

Agree with you about how technical improvements dont seem to have improved overall quality of new films. Old movies were so much more interesting because there were no special effects to to cover deficiencies in plot and dialogues. (Now that sounds so much like something my grandma used to say about about movies from her times!)

I think Harman Baweja will recover from this, unless he is a v v bad actor, which we can hardly tell by his 1st. I absolutely agree w/ u that "Old movies were so much more interesting because there were no special effects to to cover deficiencies in plot and dialogues"- which is almost sad, because we cant say the same about movies from our own times :)

Interesting!! I don't think Bollywood is good at futuristic movies. Even though Krrish was stylish, I hated the fight scene.

I love your blog and adding to blogroll now.

Nope they arent, and but its well that they still persist- it may work out one day! :D Ditto feelings for your blog, which I am still actively reading- adding u too!

Thanks shweta! You've saved us a lot of time and sacrificed your time for our benefit. I am touching your feet in reverence and appreciation.
All the best!
Sita-ji

Sitaji! I am blown away by the gesture, even as a joke! To prove myself worthy of such honor, I shall immediately dispatch myself to watch the worst in the video bin- rofl.