Here is the next installment! This is probably the last of the Hollywood lot, since I've decided I cannot afford to watch movies in theatres any more :) 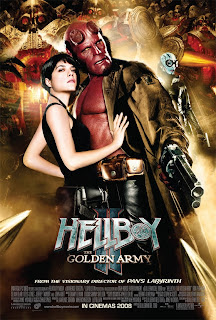 Its the summer of the hero! My husband and I had eagerly awaited this movie since the time it was announced, so we skipped with joy to the theatre the minute it came out.

Pros:
1- Ron Perlman, Ron Perlman, Ron Perlman- he was BORN to play Hellboy, and I am devoutly thankful for it.
2- Guillermo del Torro's vision is just so amazingly beautifully magical, you have to see it on the big screen. He pulls the movie from being average to brilliant.
3- I love how Anna Walton looks here- am speechless.
4- A tight script, and really snappy dialogues. 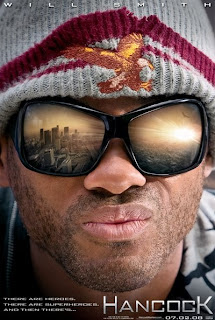 
Definitely a unique concept- a superhero fallen towards grungy homelessness. But much as I love Will Smith, I wasn't impressed much. Maybe because there have been just way too many super hero movies this summer, and I just didn't have any "wow" moments watching this.

Pros:
1- No matter what movie he might star in, Will Smith makes it worthwhile. 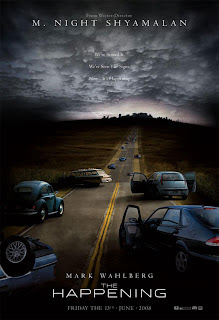 Ah well- New York, as usual, is affect by a monster- only this isn't a monster you can see... Initially presumed to be a terrorist attack, it involves gusts of wind, following which whatever people it touches suddenly stand still, then kill themselves.

You'd think this would be a really interesting premise- but the execution is so darned shabby, its laughable. The dialogues are so dumb I thought my ears were bleeding :S. The actors try their best, and the Maine scenery is gorgeous, but that doesn't help the movie.

Cons:
1- Shayamalan has tried to make an entire 2 hour movie on 1 idea, which he repeats scene after scene, without modulation. This single-handedly kills the movie.
2- Terrible, shoddy scripting, editing and dialogues. I honestly feel really bad for everyone involved in this venture :/

Oh I agree with you. It's just too damn expensive to go watch a film these days. And the number of films one watches, doesn't help.

I like Selma actually. In fact, for that undefinable somewhat annoying trait, precisely.

Wow, I thought The Happening happened in Pennsylvania! Shows what I know. :-P I love M. Night's stuff usually but I could tell from the interviews I shouldn't even bother with this one.

And Hellboy's been getting rave reviews everwhere I look, esp. for the visuals. Can't wait to see that.

Banno: She is best in Hellboy I've decided. Cannot handle her in much else.

Ajnabi: Wahlberg is a teacher in Pennsylvania, but the movie begins in NY, where the virus first starts. He then runs out north of PA to avoid crowds which supposedly aggravate the virus. Seriously, it was so so bad :S

I went to see this last weekend and had a couple thoughts that kind of even makes me want to write my own post on it (Even though I haven't been writing on Hollywood movies in my blog--although I'm glad you do :) )

First of all, I think M. Night Shyamalan set the bar way too high with his first film, The Sixth Sense. That movie in itself was a very slow paced movie (as I've noticed considerably with repeated viewings), but there is a huge payoff at the end that makes it all worthwhile...I think all of his films after that one were naturally slow paced, yet each time the viewer still holds out hope for another shocking ending that will explain why everything in the movie wasn't quite as it seemed. And it just never happens.

Also, here is yet another film about a population problem--We just had I Am Legend, The Mist...I know those films are pretty different on the surface, but the whole world coming to a climatic end thing is getting too played out for me.

Sorry for ranting on your blog! I guess what I was trying to say, in a roundabout way, is I agree with you. :)

Nida: Hehe- I can find a Bolly connection to eveyr movie I write about! For example, I find movies like "Hellboy" have so many Bollywoodian emotions (marital discord, unrequited love, revenge) that they are an easy include here. Hancock could be a superhero Devdas (no woman there, but I'll ignore that :D) and the Happening has a Indian-origin director (so what if he hasnt directed anything Bolly?)- these are all probably insane exagerations...:D I think you are absolutly right about Shayamalan's issues in his movies. Excellent point on the whole "population" thing in movies- not a rant- because I do agree that it IS getting wearying. Maybe they need a new hoax to scare us with :D

Wow, you put Hollywood movies on your blog. I can not wait for Hancock. Will is my fave Hollywood actor!!

hehe- yep I transgress from Bollywood sometimes- but Hollywood is hard to ignore, esp when I live next door to it. And this year's summer movies HAVE been exceptional :D I love WIll to distraction, sure :)