The recent promos of Bachna Ae Haseeno ("BAH"- heeh) remind me very strongly of Teen Deviyan (1965), and I suspect that it will be similar to the 60s classic which I love, despite... well read on and see. 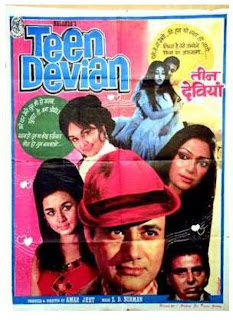 Devdutt Anand (Dev Anand- yup he used his own name- I love it when they do that!) is a regular guy who works for I.S. Johar (yes, him too) in a music instrument's store. There seem to be a lot of Bolly movies from the 50s-60s where the heros had that specific occupation- I wonder why.

Dev is also a poet, and he begins to gain some popularity. His personal life is also looking up, with the advent of cute neighbor Nanda- one of the very few times where I really liked the woman- btw- she has a humonguous behind- seriously :)

But Dev has also other fish to fry: movie star Kalpana (so beautiful!) and Radha (Simi- drop dead gorgeous). Both of these women are attracted to him as well, and now it is up to Dev: who will he go with? Isnt it obvious? It speaks to the chauvanistic attitude of the movie makers that he goes for the most non-threatening of the three :S

Despite this, the movie is utterly charming, the songs are wonderful and its really just light, frothy fun.

Which brings me to "Bachna Ae Haseeno"- unless I am completely off base, it seems to me to have a striking resemblance to Teen Deviyan, as noted in the various promos. And I really am looking forward to seeing it- I like all the actors involved, and I do have a kind-of-a-feeling about this one....

But back to Teen Deviyan.

Pros:
1- Dev Anand, in all his narcissistic, hair flipping glory- I love, I love.
2- Simi and Kalpana I find amazingly beautiful- and even Nanda is so quietly graceful here. I found that Kalpana killed herself in later years, which is terribly sad.
3- The narrative flows really well. I wish I could post some screenshots, but the dvd died after 1 viewing (huh?!) :(
4- Last but not the least, UTTERLY amazingly sweet songs. I found what I could on you-tube, for your listening pleasure :D

- Aise to na dekho, kahin humko nasha ho jaye (lit: Do not look at me in that manner- I may get intoxicated...)

- Likha hai teri aankhon mein, kiska afsaana (lit: Whose dreams do you carry in your eyes...)

Cons:
- The hint of chauvanistic attitude in the movie's conclusion :)

Last Word: Just watch it already, if you havent yet!
Posted by Shweta Mehrotra Gahlawat at 3:06 PM

Thank you for sharing this, Shweta. It has some excellent songs, including one of my all-time Rafi favorites, 'Aise to na dekho'. I'll look forward to checking this out!

Although I am not expecting much from Bachna Ae Haseeno, in which case I will probably be surprised :)

Teen Deviyan is one of my favorite Dev Anand films. Love the music, love all the actresses (as you said ;-)

I haven't paid much attention BAH yet. Will need to look into it! Of course we can't depend on the people who made it to tell us!

Wow, thanks so much for this. I have to watch this. I never saw much of Dev Anand so I'm looking forward to watching this in the future.

PS - I met Dev Anand at his book signing.

Bollyfan: Yeah, they didnt make a single mistake on this soundtrack! Honestly, who knows what they will do with "Bachna.."...:)

Memsaab: BAH honestly feels like a take off on Teen Deviyan- but Mymy prediction may be terrible wrong! Yet, the promos talk about Ranbir being in love with 3 women at 1 time- which is just so obvious...

Nicki: You've met Dev???? WOWW!!!! what was ur conversation? tell me tell me! [major excitement]

"Cons:
- The hint of chauvanistic attitude in the movie's conclusion :)"

Shweta its way more than a *hint*! The only time in that period when Dev was both narcissistic and chauvinistic (his narcissism didnt take full root till the next decade). He usually steers clear of chauvinism too - wonder what brought this one on! Inspite of gorgeous principals and the most beautiful songs, this is one Dev Anand movie that I never quite warmed up to - perhaps because the romance is too diffuse with three recipients! lol

I didn't talk to Dev long. He studdered a lot when he was talking but he asked my daughter and my name. He signed the book and we took pics (which I can not get from the sponser!!!!). However, I do have a pic of him standing talking about his book.

Bollyviewer: [sigh] I had given him the benefit of doubt out of love :D He WAS at his best in the 50s, but it says something for the spirit of the man to have persisted in his passion till day :)

Nicki: v cool! You should post it on your blog, so we may all admire :D

This sounds cool. I think it'll bring my Netflix queue up to 35 movies, though. :-D

Hi Shewta,
I stumbled upon this blog from your other blog, this one is even more interesting! Being a bollywood buff myself, and a great fan of "Teen Deviyan", having watched it an umpteen number of times, I found your blog an interesting reading.

Thanks for bringing this to my attention, Shweta! Now I wonder what other films have this sort of theme.. I know one, a Telugu movie from 2005 or so called Chukkallo Chandrudu where Siddharth is trying to decide which of his three childhood loves he'd like to marry (as per his grandfather's wishes). As in this one, he does rather pick the least 'active' one but at te same time, it's very understandable in context.

Ajnabi: Yep it is- and you wont regret watching this one :)

Aditya: Thank you for your kind words- keep visiting!

Veracious: Your knowledge of Southern Indian cinema is seriously amazing! and Siddharth- [sigh] I've been in "Kadhal" since Bomarillu :D

Nice post! Teen Deviyaan is one of my favourite old movies, especially for the music.

Some of the Dev Anand B&W movies are quite a trip. Paying Guest, Asli Naqli... brilliant music, and Dev in all his glory.

Argh! Memories of Garam Masala make me want to keel over and die :D Thanks for your comments Ramsu- keep visiting!