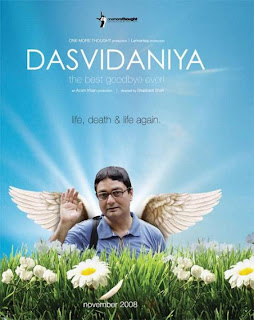 Seriously, I need to stop watching emotional movies- I was weeping so hard during some of the movie that my husband wanted to know if we should just go home :S

Vinay is a nerd working at a pharmaceutical firm, unmarried, unattached and living with his mom, the really brilliant Sarita Joshi. He discovers he has terminal stomach cancer, and is given 2-3 months to live.

After some advice from a drunk Ranvir, Vinay figures that the only way to deal with his impending death is go around fulfilling all the dreams he hasnt been able to live out, including getting one up on his boss (Saurabh Shulka), buying the most expensive car he can, finding his childhood love (Neha Dhupia), meeting his best friend from school (Rajast Kapoor), reuniting with his brother (Gaurav Gera), and gently breaking the news of his illness to his mom.

And he does die.

Quibbles:
1- It is amazing and absolutely unbelievable that someone who has 2-3 months to live appears perfectly fine externally, and successfully travels alone, without betraying his ill health. If you watch this, it may be better not to dwell upon this line of thought, because the movie will stop making sense.
2- Vinay has stomach cancer- he isn't mentally deficient, but for some reason acts increasingly so when he travels abroad. Come on now.


Highlights:
1- It could have been a pure sob fest- but the actors lift it out of possible dreariness with little rays of sunshiney laughter. You believe its real. And it does touch you- all because every actor, despite the length of their screen time, leaves real impact behind. Every single cast member delivers and more, and brings the movie up several notches.
2- It isn't Anand- there is no unnecessary altruism- Vinay 's choosing to finally fulfill all his personal dreams makes sense, and you want his wishes to come true, and empathise with him when they do and they don't.

Aside:
I am honestly not a good reviewer of this film, because I couldn't keep my personal quotient out of it. A loved one did die of the same disease, with much pain. I couldn't help but compare Vinay's cherubic bouncing through the majority of the movie to the very real pain a patient would endure in this situation, and found the movie completely obtuse for ignoring that (See Quibble #1). :)
Posted by Shweta Mehrotra Gahlawat at 12:53 PM

Thanks for the review, Shweta! I've been curious about this film, and just recently got my hands on a copy. Will have to give it a dekho (though I fear the barsaat cry)! Read somewhere else that it was basically a Hindi Bucket List... but haven't seen that either, so it's all new to me!

Sorry re: your loved one :( and yay to the film for letting you sob! I love a good cry-fest.

It is amazing how filmi dying people stay healthy till the last moment and then suddenly keel over and die! But its nice to see off-beat subjects in Bollywood and Vinay Pathak in the lead is off beat enough for me. :-)

PPCC: It IS v similar to Bucket List, though I think they were having more fun in that one and I didnt cry there. This one carreis sadness even in the light moments- more philosophical too.

Memsaab: Thanks. Oh a cry fest you will get with this one, for sure.

Bollyviewer: The agony-free dying bit was totally silly :) Vinay was totally adorable however, I too LOVE how he is doing more and more prominent roles- did u catch Via Darjeeling?

I was just going to say this sounds sorta like The Bucket List, which is a good movie -- but I love how Indian-ize it becomes! I need to watch it! Thanks for sharing this. I'll look out for the movie. Plus I think Vinay is awesome

Nicki: I do agree- Vinay is completely awesome :)

I'm so sorry you lost someone to stomach cancer; it seems a terribly painful way to go. :-( I've only seen Vinay in Aaja Nachle, but he was utterly charming there.

Thanks Ajnabi- she was in horrendous pain. Vinay was good, but the movie treats the illness like its the flu- painless and tame, except one dies from it! :)