Dev D and the last Devdas

Sounds almost poetic, yes? The "last Devdas."
Because ultimately, Dev D has undoubtedly changed the cinematic image of the eternal Devdas, who has trotted out multiple times on the silver screen, each time morose, alcoholic and ultimately self-destructive.
And yet, the Dev who changed them all, pays tribute to the last Devdas (2002).

There is of course the figurative: Unlike the novel, in the 2002 movie Chandramukhi (Madhuri) and Paro (Aishwariya) meet, even dance together. In Dev D, the Paro (Mahi) and Lenny (Kalki) sit accross each other in a train to Chandigarh, and exchange pleasant little nods.

Later, Lenny is obsessed with Bollywood songs (who isnt?)- and when Chunni asks her what name she has decided on for the prostitution business, she is watching Madhuri on TV, dancing to Maar Daala from Devdas (2002)- and she decides to be called "Chandramukhi" after her.(incidentally, Kalki talks about her Devdas love here). 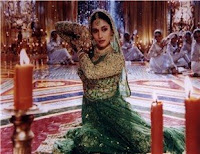 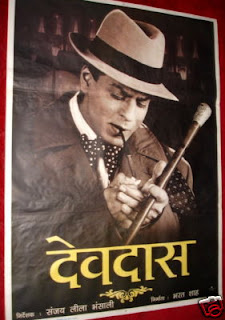 Still later, Dev stumbles in Pahargunj, and is met by Chunni for the first time. As they enter the underground pub where they will do "relay" shots, they are greeted by this SRK poster at the doorway (shop front shutter).

So Anurag too succumbs to the popular Bollywood-references-within-a-Bollywood-movie syndrome, but in a very clever way of course. Were there other Devdas 2002 references in the movie? Perhaps, but I at least will have to watch it again, more analytically, before I can tell.

PS: Anurag Kashyap's next, Gulaal comes out tomorrow- but apparently it wont be showing in any Indian theatre near me. Sadness. Please give a shout out if you hear of it playing in the OC.

Posted by Shweta Mehrotra Gahlawat at 9:20 AM

Those are very clever references. I enjoy them because they make *me* feel v. clever even if all they mean is that I've devoted far too much brain space to sugar candy entertainment and its components. ;-)

Cant wait for Gulaal. Late, but just now i am listening to its OST and it sounds so devoted to the film, hope its intrigued well in movie.
Gonna see at 6pm.yay!

Still havent watched this! :-( Love the Abhay header - that dimple is just soooooo attractive. I still dont see the Dharam likeness though. I mean, he looks similar but doesnt act or talk at all like Paaji, so the resemblance isnt all that great (does that make any sense? it did just before I typed it!).

Ajnabi: Yeah that's so true- now I feel manipulated- but that's cinema all over right- manipulation to make the audience feel a certain way. O boy- I am getting philosophical now- will stop :D

Darshit: heartbroken at not being able to see. but waiting to hear how u liked it!

Bollyviewer: If Abhay was a religeon, I'd be head priestess. His resemblance comes off in mannerism and even looks once in a while I think. And strangely, it wasnt strong in the initial movies- I think I noticed in a couple playes in "Oye", and in maybe 3-4 places in Dev D- its whenever he channels angst- now I am being vague :D

I'm not a fan of Devdas...but dang girl, your obsessiveness makes me want to watch Dev D. :)

PS - Abhay is looking so cute in banner

Nicki: I'm set on rewatching all of his movies- all hail the Abahy. Its a gr8 movie Nicki- I just identify w/ it- prob a lot of folsk in our generation do.

My my, i was about to suggest u to put up a Film Festival of Abhay. Is it under making??

I have seen his All movies except Ahista Ahista, only opening scenes i could see. Never have Abhay disappointed (even in silly superhero bit in Honemoon...)

I'm still waiting for the DVD :(

Darshit: u got it- its been in my thoughts, and Im looking for a good copy of socha na tha to kick it off. Sigh- I loved him and Minissha in Honeymoon- so perfect, so insane :)

An Okay film nothing great about it at all.

Kabir: Thanks for visiting!