Student Politics as portrayed in Bollywood, and Gulaal

Movies based around student politics and universities usually leave me shocked and awed with all the angst brimming and flowing all over the place. The oldest recollection I have of this is in the closing scene of Garam Hawa(1973), where the issue is just barely skirted- Farukh Sheikh decides to join the student protest against joblessness- it is a positive portrayal of student politics, and leaves us walking away from this intense movie with a tiny glimmer of hope. Unfortunately, most Bollywood movies about student politics end in grief.

Every year, hundreds of Bollywood movies feature university students. More often than not, the lead pair meet in university (often referred to as "college" ) and dance and sing in pleasant oblivion- which is all good, sanitary and sweet. But once in a while, movies that explore the psyche of university-going adults come out, and are far more despondent and violent in their approach, usually incorporating ragging (breaking in/initiation of new students to the college via public humiliation and even physical pain). One favorite that comes to mind is Holi (1984), an early Aamir Khan starer that explores the psyche of young adults who just want a day off on Holi- their simple demand spirals gradually out of control until the day ends with one suicide and imprisonment for the others left behind. This one was perhaps less about university poitics and more about the power struggle in universities, and I was reminded of it when I read Lord of the Flies, years later.
There are of course movies that attempt to saddle both the commercial and the art house, like Shiva (1989), which made such a strong impact on moviegoers that it was made in multiple languages, and even remade by its director in 2006 (albeit to disastrous results). Shiva is violent, underscoring the criminal and political underbelly of Indian universities, and works, despite the lead, Nagarjuna looking old enough to be a professor. There have been other movies since, including Haasil (2003) and Dil Dosti Etc (2007), but neither of these did much for me. And then there was Gulaal. 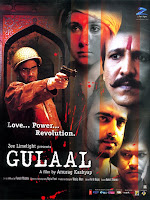 Title: Gulaal Year: 2009 Cast: Kay Kay Menon, Ayesha Mohan, Abhimanyu Singh, Raja Chaudhary, Aditya Shrivastava, Ayesha Mohan, Mahie Gill.
Like other university politics movies, there are multiple characters here with multiple back stories- and yet, each character is well etched, and before the end of the movie, you get a sense of what makes each one tick and why.
The movie opens with Kay Kay Menon, extolling the virtues of a self-governed Rajasthan state to a crowd of his followers in a secret hideout some- and while his ideologies are extremist and clearly criminal, Kay Kay's personal charisma drives the character and can lull you into clinging to his every word, as his followers do, among them Raja Chaudhay.
But we started in the middle it appears- the movie goes into flashback, recalling to us Raja Chaudhary's move to this University. He comes to town and decides to live in a bar with Abhimanyu Singh, a scion of old royalty. Raja's first attempt is to seek residence at the university hostel, but he is ragged there and badly, and thereafter resigns himself to living with Abhimanyu. The ragging scenes are pretty graphic- be forewarned.
Abimanyu introduces Raja to the local politico, Kay Kay. 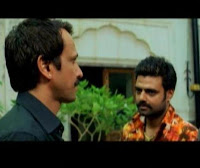 Soon enough, Abhimanyu is running for university president with support from Kay Kay, with Raja running chores for him. Know that university elections are a big deal in India- they are backed by local heavies, involve a lot of cash pumped in from political parties, and their results often define the local political scenario's future.

In a Bollywood twist, Abhimanyu's dad has 2 kids from another marriage- Ayesha Mohan and Aditya Shrivastava. While Aditya is also a local politico, Ayesha is just getting into the scene, and is standing opposite Abhimanyu in the university elections.

SPOILER ALERT!!!!- SKIP TO HIGHLIGHTS IF YOU HAVEN'T SEEN THE MOVIE!!!
As is not uncommon in real university elections, Abhimanyu is killed by Aditya's men. Instead of letting Ayesha carry the day, Kay Kay has Raja step in as a candidate and has him win by bribery and miscounting. 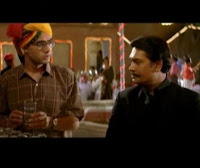 But Ayesha ain't done yet- she seduces Raja, then Kay Kay in order to gain that precious university general secretary seat.

But Raja is in love- and he gets good and mad and decides to go on a shooting spree, before getting shot in the end himself. Ayesha and her brother get the social status they want- and don't seem to care very much how they got it.

And that's the movie- is it worth a watch? Definitely- each actor outdoes himself, even if the story isnt quite as satisfying in the end. Even now, I am ambivalent about it: there are both Highlights and Rants enough.

1- The music- especially the crazy mujra which is more of a commentary on American and international politics.

2- Kay Kay Menon- you will not empathise with him, but you will be compelled by him- he is that good.

3- Mahie Gill- is strong in her small role. She is struggling for survival, using any man avaialble to move up. She coerces and whines well- especially her plaintive "main Tabu jaisi lagti hoon na?" (I look like Tabu, dont I?)- which is true of course.

4- The use of the ardhnarishwar (a half man-half woman, from Hindu mythology) creature who slides in and out of the frame in Kay Kay's home- very surreal, and powerful symbolism. I enjoyed the interaction of the real with the unreal.

5- Raja Chaudhary isn't a brilliant actor, but he wrote this with Anurag, and has done a pretty decent job in the story telling.

6- Abhimanyu, Piyush, Aditya- these men have had far fewer applauds than they deserve. I definitely want to see more of their work.

7- I appreciate the fact that there was no unnecessary preaching. The director allows the viewer to make up their own mind regarding what they are seeing. That we are a product of our own decisions, good and bad, is underscored without beating us on the head with it.

2- A lot has been written about Jesse Randhwa in the movie. I didn't see the brilliance though- she acts the same way in real life as well: the same walk, talk, the same drugs. And so it was more of a case of perfect casting, not perfect acting. Knowing her professionally prevented me from buying into the character, but I am being too critical as usual- she did what was needed.

3- The use of Gulaal (red powder used in Hindu ceremonies and in the festival of Holi, among other things) seems a bit forced- it could have been integrated better into the movie- but I am nitpicking now.

4- I'd have really liked a bit of a back story about WHY the ardhnarishwar character skulks about Kay Kay's house- who was he? It is obvious that Kay Kay's uncle Piyush is very fond of him- is he his friend/lover/child? Maybe it was explained and I missed it. It definitely bothers me that he wasn't explained enough. The symbolism may lie in the fact that politics may employ sexuality as a tool, but eventually, politics, like the ardhnarishwar is essentially asexual.

Even I couldn't understand the Ardha Nareshwar character. I've mentioned that in my review..it's highly confusing.

What did you think about the climax?

This movie seems to inspire strong feelings in all the reviewers! I am definitely curious but still not sure if I want to watch something this stressful. Somehow Rajasthan and Bihar have come to symbolise moviedom's idea of places just beyond the last outpost of civilisation. While this offers a lot of creative freedom to the movie-makers I am not sure it translates into happy viewing for us!

Bhargav: I thought about it some more, and added to the last paragraph of the post. It seems to me the only explanation, though of course, the only answer lies with Raja, who wrote the thing! :D

Bollyviewer: you know, watching it didnt make me sad or angry- per my rant#1, I honestly felt no empathy towards any of the characters. But you may be more sensitive to it, and of course, it isn't a happy movie at all :)

Agree with you very first rant. Kind of involvement which could be more impressive, was missing. So we can not emphasize but just be an audience.

And the 'Ardhnarishwar' is somewhat explained in the movie. Remember KayKay shouting at him as hijra..? The kings are famous for keeping hijras to protect their harems. This must be last of them. And Piyush who had nobody to call his own, would be obsessed with him, for music too.

Great Post not really seen any hardhitting student movies, i've been dying to see Garam Hawa, but it's hard to get on Dvd, do you have any idea where its available, India times lists it as one of the top 25 bollywood movies to see

Darshit: Oh I see- but does 2 women- 'cos Ayesha came later qualify as a harem? :D It still doesnt explain the outfiture, but it makes complete sense that Kay Kay was clinging to a symbol of the old rule. thanks!

Bollywooddeewana- Garam hawa is more about the tragedy of partition, and the seeking of identity among Indian muslims- arguably the best thing Balraj Sahni ever did. Not sure about the vendor, but it can be bought here: http://www.webmallindia.com/shop/movies/garam_hawa.html

Cool blog! I definitely want to see this...Kay Kay Menon is so underrated. I loved him in Life in a Metro, Honeymoon Travels, Sarkar of course, among others. I hate when bad films like Drona and Strangers waste his talent.