What a fun visit to the theatre with The Bollywood Fan ! This movie is funnier than it intends to be, and very entertaining, despite all its flaws (and there are many). 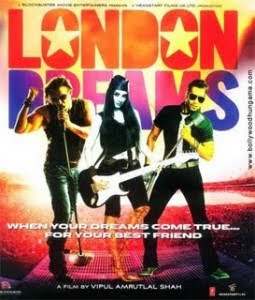 2 Children go to school together in Bhatinda, Punjab. One wants to be a music superstar. So much so, that he wishes his dad, who forbids him from practicing, would just stop- and lo- the dad dies! Such is the power of dreams!

And lo- the child is whisked away to London by his uncle, Om Puri, where he runs off (the child, not Om Puri- sheesh), so that he can beg on the streets and get admitted to a conservatory with the money- which is astounding- never knew there was so much cash in the begging business- career switch, anyone?

before we know it, the child has grown, and finally leaves the conservatory when he turns into what looks like 40-something Ajay Devgan. Why he waits so long before he decides to leave school, I don't understand.

But he does, so that at least is commendable. Off he walk, straight into Trafalgar Square. The begging biz must have done him good over the years, because he sets up amazing sound systems out of a tiny box, and gives an impromptu U2-Where the Streets Have No Name style concert- all the goris, goras, desis of all ages bop away to glory upon hearing his sound, while he recruits band members on the spot- Rannvijay and Aditya to play guitar, and Asin to dance around.

Which would be fine, but elsewhere, his childhood friend has grown into 40-something-but-looks-like-30-something Salman in Bhatinda, who is looking amazing, singing amazing songs and romancing hot women.

The rest of it is about Ajay getting Salman to London to join his band, and then being eaten up by jealousy when Salman proves better than him. That's it.

And it isn't bad- not in the least. As flippant as I sound (and feel), the movie is completely entertaining, and once again after Wanted, Salman proves that he is back in his groove, doing a very good job of it. For the boys, there is always Asin to look at- but as much as Ajay is a good actor, he really is too old to play a rock star- my 18 year-old sister wears the same belt he sports in the posters, and looks better.

Verdict: Watch it, sure- there really isn't anything better in theaters.

(Come to think of it, he's one of the few who is not too YOUNG for me to drool at!)

Memsaab: But you are too young to drool at Shammi, Rajesh and Firoz, and you know you do that, so a bit of Ajay pyar merely evens out the playing field! With such Ajay-love though, you should see the movie- he's really pretty good in it.

Great watching this together, Shweta! (And the subsequent conversation, which could've gone on forever, LOL.) Salman, from his first frame to his last, made this so much fun!

I have to disagree with you on this movie. I thought it was one of the worst pieces of crap I've seen in a while. Terrible character development, contrived plot, an overabundance of slapstick content, and on and on. Could they have made a worse choice to be a rock star than Ajay Devgan? He can glower with Omkara intensity, but singing, waving, smiling, working the crowd????? Ugh. And Salman Khan has become unwatchable -- a hideous, steroidal freak playing yet another amiable simpleton. What a piece of hack work this movie was. You were much, much too kind to the movie, Shweta. You know, ordinarily I like Ajay Devgan a lot, but let's take a moment to think about his performance: frowning, unemotive, oblivious to the dynamics of a pop star's public persona.... He didn't even try. I hope the critics ROAST him.

Bilkul TBF Bilkul! The conversation was the best part of it- we can discuss Slman an Bollywood forever :D

Tim: Thanks for stopping by! Its the Salman-love that keeps us going back to the theater, in this case. Come to think of it, he has done movies that were way way worse than this, and if the love survived that, this is completely tolerable :) Ajay is miscast, but the movie is done with...

Gee, I sounded so angry! Sorry about that! I really need to understand Salman love. Sitaji at Bollywood Food Club will tell you that I pretty much love everyone, but something about SK totally, utterly eludes me. Maybe I can't get past what he's done to his body. Of course, every actor does it to some extent these days. Even Ajay Devgan is hyper-buff, when you can tell that his natural body type is lean and willowy, sort of like Amitabh's was, or Shashi Kapoor. Back in their heyday, they were way, way hotter even without veins bulging from their biceps.

Tim: heeh- no matter- I'm certain you felt the pain, hence the anger :) Here's hoping our beloved actors take better care of their minds and bodies!

Oh, I loved the movie [except the ending ofcourse]. And given great music and styling, above all Salman's absolutely lovable act, It really needs a re-watch for me. :)

Does one really need to love Salman to like this film - because if so, I may end up like Tim. I really dislike him these days - from his bloated turn in Yuvvraaj to just about everything else. The guy is looking rough.

Ajay on the other hand... yum! He was great rocking out in All the Best!

Darshit: I think the movie was very flawed- but like you, I cant fault Salman- he can do no wrong! Music: Not a big fan, honestly. FOr a "rock"/musical, it could have been better, I think.

Filmi Girl: In recent times, this movie seems to be the great divider of opinions :) I will agree w/ you on Salman's Yuvraj- he looked completely done in, but I do think he looks pretty fab in Wanted and LD- perhaps Salman-pyar blinds me :) Didnt know about All the Best- will try to check it out soon !

I simply can't decide if I'll be able to enjoy the film, despite my Ajay fondness. ;-)

Hi
I've been checking out some other Bollywood blogs. Your reviews are really nice and well-written. Unfortunately I haven't seen London Dreams yet, but I'm looking forward to it. :)
Please check out my new blog, Bollywood Abridged. We make little spoof scripts of popular Bollywood films. Please check it out and add us to your blog roll if you like it!
bollywoodabridged.blogspot.com

Nice to See. I will come back again.
Keep it up.
Enjoy
Roller Babies International Version
Ravindra