After writing A/Adult Certification, I went a bit crazy researching the B. As in A, the first association with B is also for Amitabh Bacchan, but like before, I didn't want to fall for the 1st and obvious choice. Bollywood babes? Heck Bollywood babies? So it went for weeks, until it became obvious- B is for books!


I have loved books since childhood- and can read about any subject under the sun. I collect, for fun, old recipe books, turn of the century - '60s children's books, '40s - '60s American womens' magazines- and of course, anything written on Bollywood.

Despite have a poor record of preserving early films and film memorabilia, there is a surfeit of books on Indian cinema. Most of these books are focused on Bollywood and iconic Bollywood figures, and while one may berate the trend and hope fervently for more books on regional cinema and the technical aspect of cinema, the authors are obviously catering to popular demand, and not to my whims and fancies :) 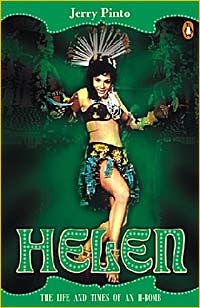 Jerry Pinto's "Helen : The Life and Times of an H-bomb," was the first book I recall reading on Indian cinema. Its a good book, and with the assistance of anecdotes gathered from industry insiders, makes for a great read. The early chapters are tear-jerkers (for me), and a very real and empathetic portrayal of Helen as a child and teenager. The book's greatest flaw, which the author discusses within, is the absence of any insight from Helen or her family. The author was denied any interviews by Helen, her husband Salim Khan and their family, and the books is notable for their absence. As a result, a fair portion of the book is given to speculation. There is also significant commentary on her roles that could have been edited better, since it tends towards being repetitious. This may be a personal peeve- I'm not fond of biographies that are fluffed for want of content- a common phenomenon in a lot of bollywood-related writings.

Which is the issue I take with Nasreen Munni Kabir's "Guru Dutt: A Life in Cinema." The book is precious for some rare photographs, and there is more than just fluff here- Kabir's interview with Mr. Dutt's mother, sister and colleagues are real and intriguing. It does seem however, that the author had too little information to write a sizable biography, because the book quickly falls into that terrible trap of filling pages with detailed reviews of Mr. Dutt's filmography. Again, not a bad thing, but more meat would be good. 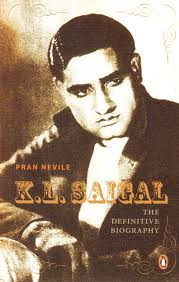 The only biography I've read, to date, where I AM willing to properly appreciate detailed reviews is Pran Nevile's "KL Saigal: The Definitive Biography." Most of Saigal's films are not easily available to a regular viewer like me, so reading about his films is complete pleasure. My favorite part of the book comprises of the discussions on Saigal's music- which I really knew incredibly little about until this book. I think the book is a fabulous memoriam to one of the industry's greatest leading men. 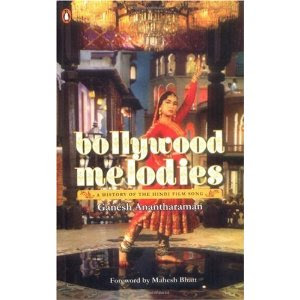 And speaking of music, Ganesh Anantharaman's "Bollywood Melodies," is a brilliant guide to Bollywood music history. The author discusses forgotten and celebrated music geniuses, and the usage of Indian instruments, styles of music and ragas in Bollywood. For a musical ignoramus like me, the book was a crash course in Bollywood music. I adore this book, but the publishing house was certainly not paying attention: my copy has significant pagination issues.

Madhu Jain's "The Kapoors" is one of the most popular books on Bollywood, and with good reason: it traces the Prithvi Raj Kapoor clan from its inception in Bollywood through its current filmi generation. The book's tone changes with each famous family member it discusses- reverential with Prithvi, gossipy with Raj, a tad racy with Shammi, and decidedly romantic with Shashi. Jain's criticism, is subtle and largely aimed at Raj and Rishi- so subtle, that for me at least it skirts dangerously close to those adoring fluff pieces written in most Bollywood magazines. The books has few photographs, and strangely, glosses over the careers of Karisma and Kareena- maybe so because it was written in 2005, and at least Kareena's career had yet to become the phenomenon it later became. I vote for a reprint, with more pictures, updated for Ranbir and Kareena, and strengthened for criticism- it would be a better book for it. 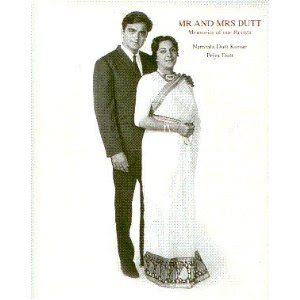 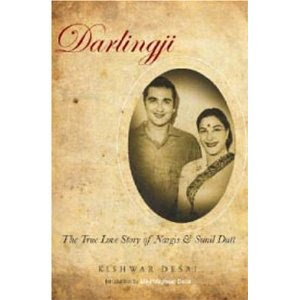 And speaking of better books, Priya and Namrata Dutt's "Mr & Mrs Dutt" and Kishwar Desai's "Darlingji" are two of the most intriguing biographies I have read. This may be attributable to the fact that the story of Nargis and Sunil is one of the most intriguing and romantic in Bollywood, but also has to be attributed to the writers themselves for their execution. The Dutt sisters' book is a beautiful tribute to their love for their parents, and a definite tear-jerker. It isn't gossipy, and that is where Desai's book fills the gap. Both books have good pictures and memorabilia, the Dutts' better than Kishwar's in that aspect. Both books are easy to read and very engaging- you can read either after the other, without feeling overdosed. 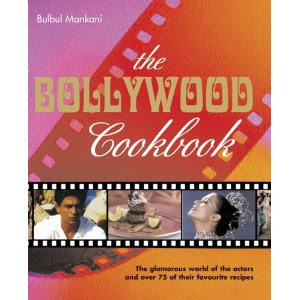 But I do feel overdosed by Bulbul Mankani's "Bollywood Cookbook." I really enjoyed reading the recipes shared by Nandita Sen, Rahul Bose, Raveena Tandon, Suneil Shetty and Shabana Azmi. Other actors- not so much- did those actors really think about the recipes they were sharing? Did Mankani really assess them- or were they added anyhow? The photographs don't always properly reflect the recipe they represent- which fact she does admit in an interview I found online. Also intriguing is the set of actors and film celebrities chosen to interview- I'd have preferred to read recipes shared by the Chopras or other film families- not necessarily Amrita Arora, whom I dont regard as much of an actor. Lastly, I don't think I appreciate the essay in the end as much as I ought to. Shaym Benegal's foreword is well-written and a perfect apostrophe to the book- the concluding essay in the book appears without purpose and simply wasn't needed- a photo essay would have sufficed, seeing that Mankani has some really great photographs in there. The book is an essential owing to the uniqueness of its subject- not as a cooking resource, since you can troll better recipes online anytime. Except for the Shabana chapter- totally worth it. 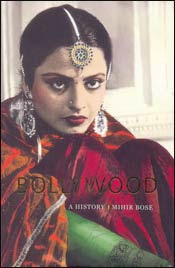 A history book with no photographs, "Bollywood: A History," by Mihir Bose remains one of my favorite books on Bollywood till date. Full of facts and trivia, historically accurate, and yet chatty and full of heart, this book is a very fun read- one of those that may be easily re-read annually, without any pain. Bose' genius lies in his stating the facts simply- and then adding his heartfelt two cents- sometimes quirky, sometimes bitter, sometimes clearly in awe of his subject- but always entertaining. You need this, if you dont have it already, for its thoroughness, that deserves applause. Ignore the bad editing and spelling mistakes, and concentrate on the history, trivia and scandal! 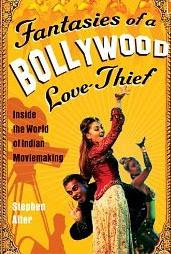 What you dont need is Stephen Alter's "Fantasies of Bollywood Love Thief." I bought it because of its fascinating title, and the fact that Stephen is brother to Tom- who I do love. The book is great when it talks about Tom and his struggles in Bolylwood. But- the title mislead me. Alter trails Vishal Bharadwaj and his team through the making of "Omkara," and covers the movie making process as experienced through this creative journey. For the amount of space devoted to Omkara, it should have been titled as such- I just kept looking for that elusive, titled "Bollywood Love Thief," whom I never did meet. Moral of the story- authors shouldnt name books what they arent, no matter smart those names sound. 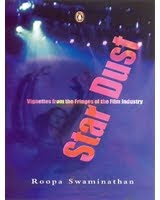 Roopa Swaminathan won the national award for the best book on cinema, for "Star Dust." And she deserves it. Despite the critical acclaim, the book is realtively unheard of and reprints/hard bound editions appear unavailable- I've been trolling heavily, believe me. Its the only book I've read on Bollywood that focusses on the underbelly of Indian cinema, discussing scandal with a directness that is refreshing. It celebrates supporting actors, and provides a remarkable insight into their daily aspirations and struggles. It discusses Bollywood and Southern Indian cinema on equal footing, which in itself is sadly still a rarity. It documents the fanaticism of the Indian cinegoer, including the extolled worshippers of Southern cinema- one can see that Swaminathan truly did the legwork and the research that makes this books a winner in every sense. The prose is engaging and brilliant, and the only downside is that the book unfortunately, seems too short. Swaminathan has other books out, including books on Gemini Ganeshan, MGR and Kamal Hassan, that I'd love to be able to get my hands on. If you can find a copy of this book, do not let it go!

The book that I am reading next, is the one that I did let go- for years in fact. It has gathered dust on my bookshelves for years now, and its strange that I never gotten to it. I have seen most of Dev Anand's films, and his autobiography, "Romancing With Life," promises to be an optimistic and goofy self-homage that is bound to be a fun read. And narcissistic, for sure.


I cannot wrap up without acknowledging the writing that is most often read by Bollywood fans- the gossip rags! My favorite magazine has always been Stardust, for its relatively balanced critiques, scathing scandals and its catty mascot. While most film magazines in Bollywood as well as it the West, tend towards bad writing, fluff and pandering, Stardust remains consistent. Its website is finally (!) current, for which I am devoutly thankful. Also online, Mid-Day's entertainment section remains relevant and well-edited, as opposed to websites of national dailies that annoy readers with bad grammar and irrelevant reporting. There is no excuse for bad writing from professional sources.


So are you still reading this blog? Go read a real book.

Shweta, What a list! I must admit I rarely read books on Bollywood or regional cinema. But this list makes me want to get going. I have read the book on the Dutts, though, and liked it a lot.

There is another book which I find fascinating, unfortunately not easily available, Balraj Sahni's autobiography, in Hindi. My friend has a battered copy, I need to photo-copy it, just to preserve it for myself.

I'd love to know what you think of Dev-Saab's book. I'm too scared to read it. :)

Banno: Both Dutt books make me weep like a baby, every time I read them :D - their love story is so beautiful! I am grateful for the tip on Sahni's book- I'm making it my mission to find it somehow- he has to have been a good writer. I've read parts of Dev's book online- it sounds very risque- which isnt surprising at all :D

I've only read one or two really bad German books on Bollywood, you know the "introducing" kind of books that tell you what films you should see as a beginner. But you have some interesting choices here, I'd love to read some of these as I'm a true bookworm.

Mette: I dont like those books either- I find them a bit patronising I think. Happy reading!