...so little time. Therefore here is a meta post of 4 movies, without the comic-book styling. 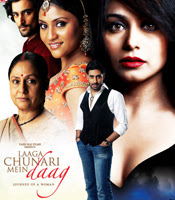 Title: Laga Chunri Mein Daag
Year: 2007
Cast: Rani Mukherjee, Konkana Sen Sharma, Jaya Bhaduri.
Note that I have just put in the women's names- I should also mention Abhishek Bacchan, Kunal Kapoor and Anupam Kher, who are the corresponding male protoganists. However, the women hold centerstage, and do a great job of it. The plot hovers around Natasha (Rani), who becomes a prostitute when she cant find any other way to help her family which is experiencing financial collapse. She walks away from Abhishek, maintains a separation of her job and family where neither know about the other. And then things come to a head: Chutki (Konkana) is getting married to Kunal, who is Abhishek's younger brother. Dont hold your breath for very tragic results however: it is a Yash Chopra movie after all. Wipe those tears- it all works out eventually, as my friend Steve often says.
Pros: The men are good actors, the women are brilliant actors. Jaya is amazing- she is every mom, every woman, and you gotta weep right along with her!
Cons: Mmm- the plot is a tad regressive for my taste (honestly- why the heck hide so much from your own family? Speak up and have done woman- but then we'd have no movie), and I honestly get bored with too much emotion.
The Kinda Good

Title: Manorama: 6 feet under
Year: 2007
Cast: Abhay Deol, Gul Panang, Sarika, Vinay Pathak, Kulbhushan Kharbanda.
Anyone who has read this blog knows how much I love Abhay Deol- I am not sure why, but I do find him the best Deol ever since Dharam. He reminds me always of Amol Palekar: that may be too much praise, but I find both actors endearing and very natural in their bodies of work.
In Manorama, Abhay is brllliant as a small-town bribe-embibing PWD engineer, with Gul Panang playing the housewife enamored with daily soaps.
Its a noir style thriller, but fails primarily due to the complexity of the plot, and the director's failure to execute the plot twists to the fullest. Abhay plays a closet writer, whose single offering: a detective novel has failed gloriously. Frustrated in a dead-end job, his life gains momentum when Sarika knocks at his door one day, to offer him a job as a real detective. She is quickly killed in a accident which he suspects is really murder. And in spite of his many misgivings, he sets out in the search of her murderer, truth, justice, etc. Of course he is successful- but what yuo need to see this and find out is HOW. You do need patience watching this movie, but if you like noir and Abhay (like me), it can be done.
Pros: Abhay and Gul's marital bickerings, along with Vinay's easy humor.
Cons: Plot complexity
The Kinda OK

Its funny! and it sort of works! Fardeen is cheating on Isha (his wife) with Esha, his secretary. Things go to hell when on a weekend getaway, Esha springs the news of their pregnancy on Fardeen, they have a huge row, she is pushed around by him, and promptly dies. She comes back as a ghost and troubles the heck out of Fardeen until basically the wife gets into a very very bad accident, and dies. Whereupon Esha's soul enters Isha's body- so that she can live with (and torture the poor sod) Fardeen for the rest of his life!
Pros: The prepostureness of the plot! And for once, Esha actually acts- you root for her as the ghost who should have revenge on that crappy ex-bf!
Cons: None really. This doesnt mean it was brilliant- it was merely passable- no outsnading flaws, but nothing shines either.
The Ugly 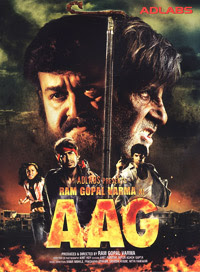 Title: Ram Gopal Verma ki Aag
Year: 2007
Cast: Amitabh Bacchan, Ajay Devgun, Sushmita Sen, Prashant Raj, Nisha Kothari, Sushant Singh, Mohan Lal.
Ram Gopal Verma did the screenplay of this- and it is definitely one of the worst screenplays of the year, translated word-to-word from "Sholay" (1975). The actors do the best they can under the given circumstances- but they cant very well do much if the script sucks!
Unless you have never seen a Bollywood movie ever (in which case you would never be readoing this), Ajay (as Heroo- aka Veruu from the old movie) and Prashant (playing Jay) are friends, and are enlisted by Mohan Lal (playing Inspector narsimha aka Thakur from the older movie) to pay out a grudge against Amitabh (playing Babban aka Gabbar). They do it, Prashant dies, and Ajay ends up with Nisha (Ghungroo aka Basanti).
This could have worked very successfully as a modern rendition of Sholay- it worked for Romeo and Juliet (1996) after all. But the horrible script makes impossible any rescuing: there is no time taken to establish the friendship of Prashant and Ajay; instead long minutes are spent in inconsequential fight sequences. The comic releif comes courtesy Rajpal Yadav, who again has horrible material to work with, and doesnt hold a candle to Asrani and Jagdeep from Sholay.
Not to miss: Prashant Raj's screen presence and Mohan Lal's acting- both deserve much better than this.
Cons: The very blah actions sequences, Ms Kothari (who cannot act for peanuts).
Posted by Shweta Mehrotra Gahlawat at 11:07 PM