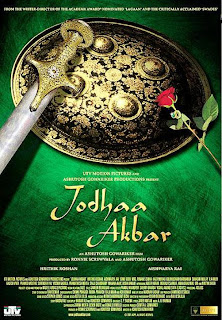 During the course of watching this, I found myself comparing it to "Lord of The Rings- The Return of the King," as opposed to any other movie. Perhaps because one thing "Jodha Akbar" does successfully is bring the historical epic back to Bollywood, with the best execution that the industry has ever experienced.


The historical facts are there, if a little twisted., and that should be attributed to the poetic licence granted to any artist, and surely Ashutosh is one. The movie opens with Akbar in the battlefield as a child, being introduced to the vagaries of war by Bairam Khan- his teacher and guardian... 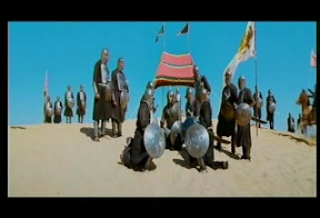 While Akbar learns to rule, Jodha is in Amer, getting engaged and learning to sword fight with Sujamal, her cousin (a rather handy, old-time Bollywood plot device- show a character doing something well, and then use it at various times in the movie). 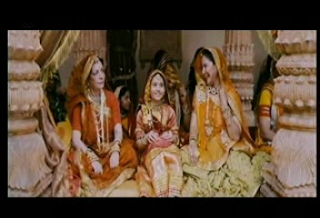 Akbar grows up into a surprisingly impressive Hritik, and quickly establishes himself as a secular ruler, bringing Bairam Khan to book fo attempting to kill off a captured ruler. (I agree w/ Sanket that Bairam's character is not explored properly- more screen time would have helped for sure, but there is only so much u can squeeze in to even 3.5 hrs). 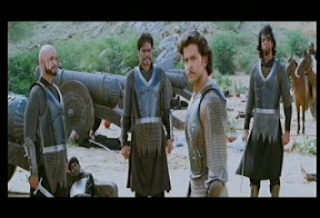 Akbar was set to conquer the Rahjputana, the areas in Rajasthan ruled by the Rajputs. While many Rajput kings struggled and died in war against him, the king of Amer (Kulbhushan) decided to make peace with the Mughal king. This bought the king of Amer derision from all Rajputs, and as a matter of fact, till this day, Amer is looked down upon as betrayers of the community in Rajasthan (something I learned during my conversations w/ the locals this past year). Worsening his image in the community, but making his political future safe, Amer went off to Akbar, accepted his rule and offered him his daughter, Jodha, in marriage (since the Rajput she was engaged to wouldn't marry her now after Amer's treachery. 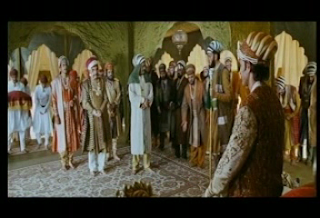 Akbar is taken aback, but then accepts the offer, accepting Jodha's wishes to follow Hinduism and have a small temple in her palace. The wedding is done, with Aishwariya looks appropriately ethereal. 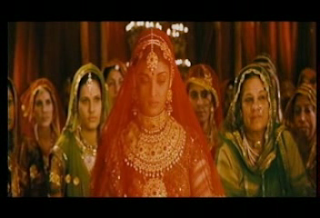 There is a Sufi song and dance at the wedding, and while the song is beautiful, I am inclined to think that the dance should have picked up speed- every time I have seen it on the Travel channel, it seems to me that that particular style of dance moves to a crescendo before ebbing to become slow and then stop. Ah well. Still mindblowingly pretty. 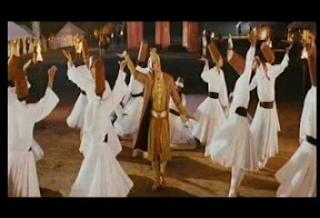 Jodha begins to settle into her new home, and it was actually a rather clever plot point to bring in the consensual celibacy if you will. It introduced a definite sexual tension in the movie. 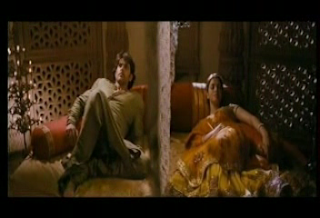 And the film progresses on to address various sub plots with Akbar proving himself as an able ruler and a good man, until he and Jodha finally fall in love. 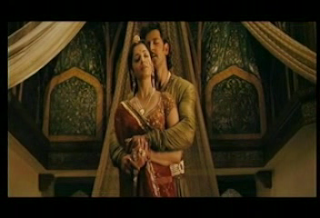 Sujamal (Sonu Sood) had taken off from Amer when the King had decided to hand over the rule to his own son Mansingh, rather than Sujamal, though the latter was a better candidate for the job. Sujamal was pretty mad, and had joined hands with Akbar's brother in law Sharifuddin (name means "decent"- hah) to plot against Akbar himself. Once the battles would be won, Sujamal would get Amer, and Sharifuddin Delhi and the rest of Akbar's holdings. 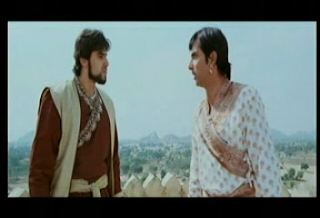 Sujamal & Sharifuddin ride into battle against Amer, with Akbar riding in to save the day from the other side. 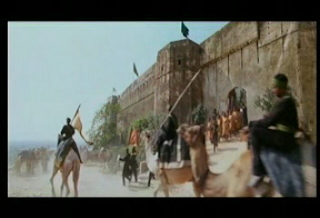 While the armies are camped and readying themselves to fight, Sujamal overhears Sharifuddin explaining, in classic Bollywood villain style, the details of his deviousness to his henchmen: After defeating Akbar, Sharifuddin would kill Akbar, and Sujamal wouldn't be spared either. 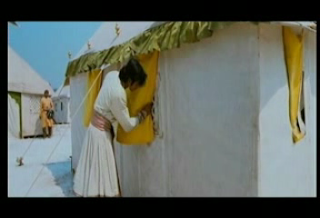 Not wanting his cousin Jodha's husband to die, Sujamal decides to alert Akbar. He is however found out, but somehow makes it to Akbar, spilling his guts and dying while apologising to Jodha. 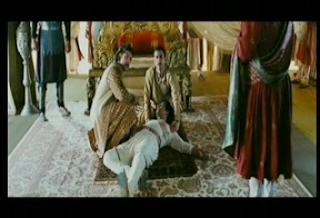 From the point onwards, the movie kinda went downhill for me- the pace somehow flagged. Akbar and Sharifuddin have hand-to-hand combat, Sharifuddin loses, but Akbar forgives him, and everyone lives happily ever after (another old Bollywood device- the hero wins against in enemy in single combat, but forgives etc.) 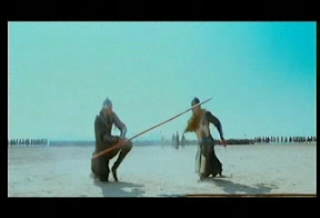 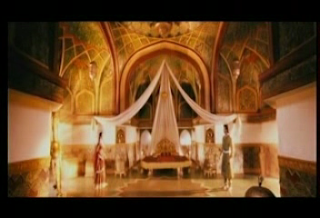 Highlights:
1- Hritik acts- he CAN actually act. It amazes me no end. And Hritik's Urdu diction- he rolls his Rs, and gives appropriate depth to words, without affectation. His speech was the only part in the movie that reminded me of Prithvi Raj Kapur from Mughal-e-Azam- as effective. So good job sir: well played and well spoken.
2- Aishwariya wasn't shrieky! She is as graceful as needed - it was surprisingly easy to enjoy watching her. So well played too madam- just don't shriek anymore, don't laugh too much either- just look awed/dismayed/perplexed, and you will come through just fine, like you did here
3- The locales and studios- Mr Gowrikar, your set designer rocks (much as I dislike that word).
4- The epic itself- it was SO good to see a proper historic battle- the whole sense of grandeur was just so well captured.

Not so sure about the editing; Some scenes are just abrupt: After Akbar's return from Amer to get back Jodha, the scene just switches back to Agra without a by-your-leave. 2- The various Akbar-Jodha montages from the movies that are played back at the end of the movie with Amitabh's voiceover- just didn't cut it for me. 3-Bairam Khan appears in the beginning, and then in the very end.

Aside:
Was it just me who was reminded of the messenger-thrown-in-the-well scene from 300, when Hritik had Mahamanga's son thrown down the palace roof?

My husband works for the company that produced the film, and he told me that they actually used 100 elephants and a real cast of 1000's of extras for the battle scene, it was not CG. Oh - and Writhik did the elephant-taming stunt himself. Impressive, huh? Though no Mughal-e-Azam ( I saw the colorized version a couple of years ago and loved even that...and my God, what amazing dialogue), it's still very much in the tradition of the Grand Spectacular...

It IS indeed impressive. And I dont compare this to Mughal-e-azam at all- the 2 movies represent different phases of the emperor's life, and were made in different times- so Hritik definitely did a damned good job- I've never admired him so before! I think we need more period movies- period :D

Agree with your comments on Hrithik Roshan and Aishwarya Rai (here's my review). I wasn't sure that Hrithik could pull off the Urdu dialog and act as well as he did. It worked out well, didn't it? The only thing standing between him and another Best Actor Filmfare award is Aamir Khan in Ghajini ;)

I am sooo looking forward to Ghajini as well- I really want Aamir to pull this one off well.

Will do, most definitely!

Ghajini should be fun. I haven't seen the original, so I think I'll just wait to this one. Word is Aamir didn't like the ending to it, so he changed it in 'his' version. Should be interesting.