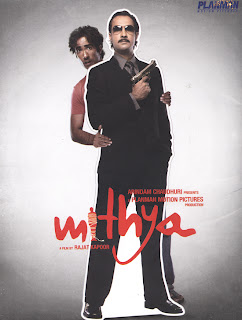 I saw this movie simply by chance, and once I did, I was truly very impressed by it. It’s a black comedy, one of the many inde-style movies that are coming out of Bollywood in recent years.

Ranvir plays a down-beat actor struggling in Bollywood, living alone in Bombay. One day, he is kidnapped by Naseer and Saurabh (who are underworld dons)'s goons. He has an assignment- he happens to look exactly like another Bombay don, Raju, and must learn all of Raju's mannerisms. Naseer and Saurabh plan to bump off Raju, a rival ganglord, and replace him with Ranvir. (Shades of Don, anyone?)

The replacement happens. and Ranvir manages, precariously, to act out Raju's "role." One day, as he is sharing his fears and apprehensions with Naseer's girlfriend Neha (who is secretly in love with Ranvir, and therefore very sympathetic), he falls off a 5-storey building and loses his memory...

When Ranvir now rewakes at Raju's house, he has amnesia. He begins to truly believe that he is Raju, and begins to care for Raju's wife and kids like his own.

Angry with their plans being upset, Naseer and Saurabh reveal to Raju's family and gang Ranvir's truth.

Kicked out by Raju's family, Ranvir is reduced to a complete sense of suspension. He loses a sense of reality, attempts to kidnap Raju's kids, believing them to be his own. Finally, Neha rescues him from the streets, and attempts to flee with him, escaping her own existence.
Unlike a typical Bollywood movie, this doesn’t turn out well: Naseer, Saurabh and Raju's Brother join hands and track the two down, and kill them brutally. In his last moments, Ranvir's memories finally come back to him.

Highlights:
1-It is funny, painful and very rough at times. It’s a very good piece of art- some fine acting, especially by Ranvir who is absolutely brilliant. Neha Dhupia acts very well, for once, and, so does the actor who plays Raju's wife.
2- A different story! which works, though I have a quibble about it too (see below). There was almost a falvor reminiscent of "Jaane Bhi Do Yaaron"- maybe good movie days are truly here again!

Quibbles:
1- Vinay Pathak and Naseeruddin come off a bit underused. I love these two actors, and the movie just doesn’t focus enough on them- not that it needs to honestly.
2- I don’t necessarily see the point of the movie- what it was precisely trying to say..... that it is a fake world and we are all actors? mmm- still thinking...

Pure Speculation:
Vinay and Ranvir seem to have done a lot of work together- TV shows, Talk Show hosting, movies- are they "just friends" or lovers? (We have since changed our minds- see Memsaab's comment on this post)

Useless Information:
Saurav Shukla has acted as well as co-written the script with Rajat Kapur, who also directs the movie, and was seen in "Monsoon Wedding" and "Dil Chahta Hai."
Posted by Shweta Mehrotra Gahlawat at 6:53 AM

Ranvir is dating Konkona Sen so hopefully he isn't two-timing her with Vinay! :-)

I will definitely give this one a watch, thanks for the review.

Hmm it must be a tough choice for Ranvir- Vinay and Konkana both come off as real smart (at least the characters they tend to play indicate as much) :D

Thanks for your comments memsaab- its a pleasure to have you visit!

I visit a lot, just don't usually have anything to add :-)