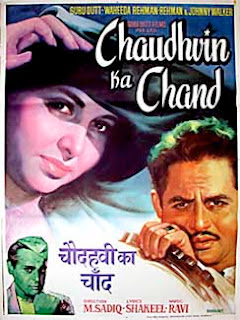 This is considered a Bollywood romance classic. I had seen bits and pieces of it over the years, but somehow never saw the whole movie until very recently, and didn’t regret the experience in the least.

Set in pre-independence Lucknow, the movie showcases the friendship of Nawab Pyare Mian (Rehman), Aslam (Guru Dutt) and Mirza Masaraddik Shaiza (Johnny Walker). While Nawab and Mirza, are titled gentry, Aslam is an orphan who has been patronized by Nawab- he now owns a small business in Lucknow, and is honor bound to Nawab for all the help the latter had given him for life. Mirza is a never-do-well, whose dad is in the police, and who also eventually joins the force later during the movie. 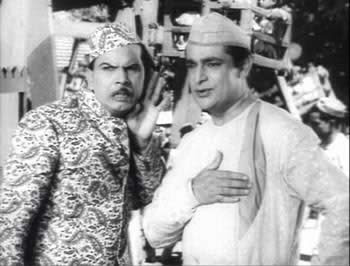 One day, Nawab spots a beautiful woman in the street, and promptly falls head over heels in love. He runs into her again at his sister's birthday celebrations, but due to the social niceties of the day, cannot find out her name. 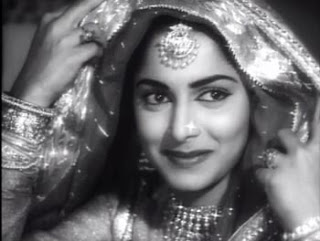 In fact, due to a hapless maid's interference, he mistakes her for another woman. Nawab shares his happiness with Aslam and Mirza, who encourage him to locate the woman of his dreams. At home, Nawab finds his mom is quite ready to go to Hajj (Mecca- the Islamic pilgrimage), accompanied by the local priest. However, the priest has refused to go anywhere until a suitable groom is found for his daughter Jameela and she is married off.

Without any consultation with him, Nawab's mom has pledged Nawab's hand in marriage to Jameela (yes, Waheeda). However, since he himself is in love with the beautiful unknown woman, he convinces Aslam to marry in his stead. The marriage occurs, and Aslam falls head over heels in love with his wife. He serenades her with "Chaudvin Ka Chand," (which Doc Bollywood has written beautifully about at his blog). 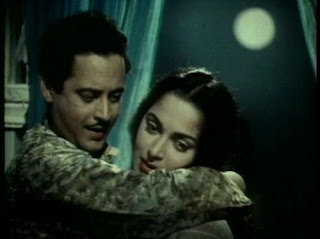 Nawab still doesn’t know Jameela is the one he has been looking for. He goes visiting to Aslam's house one day, and sees Jameela by accident, and simply assumes that she is Aslam's sister. He shares the happy news with Aslam, and begs to marry his sister, to which Aslam agrees immediately.

The wedding preparations begin, and we know we are headed straight to disaster- Nawab finds a photograph of Jameela, and goes with it to Aslam's shop, kissing it (the pic, not Aslam dammit :D) with great abandon. Aslam, the fool that he is, doesn’t say a single word to correct Nawab's confusion. Instead, he decides to become an alcoholic and vagrant, so that Jameela would divorce him.

He carries this plan to great effect, and even though his friends give up on him eventually, he finds Jameela will not divorce him under any circumstance.

Driven to idiocy, he decides to commit suicide on the very day Nawab is getting married to his sister. This would prevent the marriage from occurring, Jameela would become a widow, and Nawab could then marry her. Of course, no one else knows of this plan. Unfortunately for him, Nawab comes to pick him up on the day of the wedding, but sees him with Jameela instead. 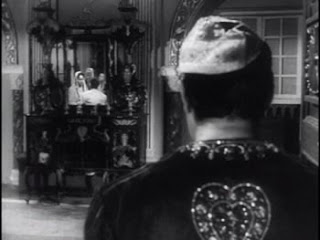 It finally dawns on Nawab that Aslam was feigning vagrancy, drunkenness etc. simply to sacrifice his own love for Jameela for Nawab's sake. Driven to intense guilt on what he had unknowingly forced his friend to do, Nawab rushes back to his home, followed by Aslam, who has just realized his presence.

Nawab reaches home, declares the wedding cancelled, and locks himself in his room, overwhelmed with anguish and shame from having desired his friend's wife. When Aslam breaks the door in, he finds Nawab has commited suicide. It ends, and Aslam gets to live happily every after w/ Jameela :S

Highlights:
1- Rehman owns the movie- he is intensely handsome, assertive and manly, and I do believe I have developed the most idiotic crush on him :D
2- Johnny walker has a real role- he is not simply the comic relief here, and it is fun to watch him act.
3- Guru Dutt is truly a consummate actor- it is very easy to hate Aslam for his weak and idiotic behavior, which is attributable to the man's portrayal of the role.
4- Waheeda is a goddess- so beautiful that YOU know that she is prettier than the moon!

I have yet to admire the characters Guru Dutt always plays- so weak and spineless, usually alcoholics. He is a fantastic director (though Saddique direct this one, Guru Dutt directed some scenes), but always picked the worst roles for himself, and Aslam is definitely a real ass. Rather than make things transparent, he carries on the ruse, making Rehman believe in his love, and unwittingly leading him to his death. Ughh!

Random trivia:
1- Watch out for Farida Jalal- this was her debut movie, and she plays Farida, Mirza's kid sister.
2- Guru Dutt had two younger brothers, Atmaram and Devidas, and a younger sister, Lalitha Lajmi (whose daughter is Kalpana Lajmi.
3- Guru Dutt was a trained dancer in Uday Shankar's troupe, and was also second cousin to Balakrishna B. Benegal, Shyam Benegal's uncle.
4- Aside from giving breaks to Johnny Walker and Waheeda Rehman, Guru Dutt also introduced Zohra Sehga as a choreographer in Baazi (though she had done minor movie roles as a supporting artist earlier- I LOVE ZOHRA).

5- It is common knowledge that Guru Dutt, Rehman, Johnny Walker and Dev Anand were very good friends in real life. Dev Anand introduced Guru Dutt as a director in Baazi, but both he and Rehman distanced themselves from Guru Dutt once the latter began to lose himself in alcohol (while pining for Waheeda, who had walked away). Johnny stuck by him to the last.

Posted by Shweta Mehrotra Gahlawat at 12:54 AM

I loved this movie, although it contains some of my pet peeves (just COMMUNICATE already, for God's sake; and stop feeling sorry for yourself(ves)!)

And I hate that Rehman committed suicide at the end. He would have found someone else (admittedly probably not as gorgeous as Waheeda, but looks aren't everything) :-)

I swear I wanted to slap Aslam silly! :D But as you say, this whole weird non-communication of one's troubles is common in Hindi cinema. For some reason, I get the message that Indian cinema wants everyone to grin and bear it, preaching tolearance of a extreme kind. I've been told this is a plot device to extend the story- I am not too convinced-

I think Rehman killed himself more out of embarassment for having somehow dishonored his friend and his wife- they kept showing flashbacks of his kissing Waheeda's pic in front of Aslam, and his own rants at Aslam for being fickle. If he killed himself out of Waheeda's love: I agree- that is pretty dumb :D

I JUST watched this movie this weekend and enjoyed it a lot, especially the music. Excellent observations here. I must remember to go out and buy a poison ring just in case I have to sacrifice myself for a friendship that is interrupted by a romantic interest. : )

thanks for stopping by!

Yes, I will let you know, or if I find a brass poison vile, ala Jodhaa Akbar I will also alert you. I will from now on keep track of small poison containers in movies.

Brilliant idea! Just like the Bolly Bob's thermos! I will report to you all the poison receptacles I locate....

Bilkul cool! Consider it done. We will officially unite to accomplish this and invite the blogging world to join us. A BollyBob thermos full of poison would be the utimate. If you go over to my site you can click on my movies

Hi Shweta,
I had to go through your blog to look for those Guru Dutt's films you'd seen.
That one looks Okay, from what you say...Would you recommend it?
(perhaps I shouldn't even ask, lover of Waheeda Rehman as I am!)
cheers

I would heartily recommend it to a Waheeda fan- she is utterly utterly lovely! Also be warned: Guru Dutt's character is flawed, and it made me sad as his fan- but Rehman made up for it!

Hello Shweta,
Well; I finally got round to seeing Chaudvin ka chand, and I must say I was a little disappointed; Not at all about the complaints voiced here (Aslam needing to be slapped, LOL), but about the whole story, which seems too unrealistic to me: I never quite believed in it: confusing one woman for another? I suppose such a thing must have happened, in India's tradition of arranged marriages, but surely, with so much cash in the bargain, wouldn't the families check with certainty?
And alas, Waheeda's charm for me wasn't at all as well photographed as it was in such movies as Pyaasa, or Teesri Kasam... That's the only reason I can give, the photography. Perhaps because the photographer was too interested in the setting, the luscious nawab decor etc. and not enough the lighting on the faces, maybe.
Cheers

Yves! Its good to hear from you- been awhile! I think its very true what you said about families checking- a lady from each family would check and act as a go between. However, its also true that only because a few of the ladies of the grrom's house would have seen the bride pre-wedding, mistakes did occur, and last minute switches did in fact happen- one of my uncles got "shown" another bride, and was married to someone else (they remain married, its been 50 yrs!). I think people were really enthu about what family they were alliancing themselves with, so as long as the bride/groom looked reasonably well, it was OK. I am a bit surprise though that you werent as charmed by Waheeda here as elsewhere- I've never thought that, but will watch more carefully next time.

Thanks for the answer; I have another question, in fact: have you seen the movie in B&W, or in colour? (It dates from 1960) I was checking Bollywoodfan 's review of the film (http://thebollywoodfan.blogspot.com/2009/03/chaudhvin-ka-chand-1960.html), and I saw the song Chaudvin ka chand in colour?! Yet his screen caps are B&W: could it be that the "famous" song was "colorised", perhaps after the film was first shown?

Yves: I love talking cinema w/ U :)Color film came to India in the late 50s, but was still pretty expensive through the mid 60s, and a lot of producers couldnt afford the stuff. Which is why a lot of 60's films by Gurudutt and Hrishi Kesh Mukherjee arent colored. WHile making "Chaudvin ka Chand," Gurudutt did want to epitomise Wahida's beauty (the reason for the entire conflict in the film), and so he did end up "cheating" by coloring post-release- hence 2 versions of the film exist. He couldnt even afford shooting just the song in color: money was tight for him then because of the poor showings of 12 o'clock and Kaagaz ke phool.

And yes, I've seen the version that has the song in color.