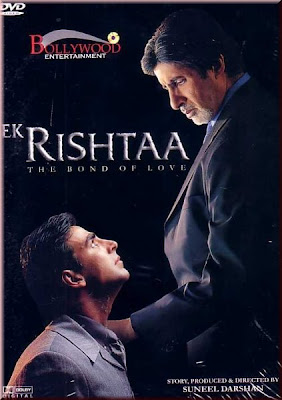 The movie opens with a remarkably badly bearded Amitabh, sick in bed of apparently depression, since nothing much looks wrong with him. His wife, Rakhi gives him some meds, and they begin to reminisce, in a long and tedious flashback ..

Apparently few short years ago, they were super rich, and had huge orchestrated celebrations on their anniversary,

where they would perform much synchronised dancing and singing with their 3 daughters...

They also have a son, Akshay, busy romancing Karishma abroad, where he is ostensibly studying ...

Meanwhile, elder sis Juhi has been romancing with Mohinish, who appears a tad too docile for his own good...

They soon marry with great fanfare- this is the first of many weddings featured in this movie- me thinks the director lost it a little. Akshay comes back to India in time to attend as well.

Mohnish and Juhi decide to live with Amitabh, as does Akshay, who is back for good and joins his dad in the family business.

This doesn't work very well: his and his dad's ideologies don't coincide, and Mohinish makes real effort to ensure that they don't.

Things come to a head where Akshay ends up leaving home, beginning his own work and marrying Karishma while wearing a long, strange-looking kurta, that could double as a robe if required.

Time passes, and Amitabh is surprised one day when a group of businessmen show up at his office, claiming that Mohinish has sold the business to them.

Amitabh loses everything- apparently Mohinish has been funneling his money all along, and even the mansion they live at is up for auction. This finally gets us out of the flashback and to the point where the movie started, with Amitabh at the end of his tether.

The good son that he is, Akshay hears of his parents' plight and comes back...

Which his wife, Karishma, disapproves of- we don't really every get to know the reason for her disapproval, we just know it exists, which doesn't help the movie in any way.

Amitabh gets his property back via extortion using some local goons,

But does he get his family back??? We honestly don't care, and there is 1 little surprise at the very end, but it isn't enough to save the movie, which is basically a useless exercise in pain.

Pros:
1- Decent cinematography.
2- Juhi is the saving grace of the movie- but cant do much alone, since her character has limited screen time. She is the one spot of adorableness in a sea of utter rubbish.

Cons:
1- What a horrible horrible script- there is little to none character development, and as a result, one has little empathy with even the positive characters. While Mohinish's character has an excuse for being a cad, the rest of the cast comes off as unintentionally idiotic, and take the worst and most unbelievable decisions possible.
2- Akshay's character is so ridiculously docile, that it grates on you. He is much better off playing comic, bad-ass roles.
3- Amitabh was going through his black hair, white beard phase- and had never before or since looked worse. Add a role with zero depth, and you have him in one of his worst performances ever.
4- Don't like Rakhi- never did.
5- Karishma- high pitched, irritating and with a really poorly etched character, she is capable of doing better, but obviously doesn't get an opportunity to do so here.

Sounds an awful lot like all the recent family tear-jerkers - all with Big B and his beard (Baghban, Waqt, Babul)! How did you make it through the entire movie? I sat through Baghban just because of gorgeous Hema! Thank goodness I missed seeing Ek Rishta when it came out. Now, I will stay miles away from it!

I fast forwarded my way through in about an hr! heeh :D
Amit and Rakhi do not share the same chemistry as he and Hema- it was highly unromantic- rofl.

Yeah, I remember this dud. Too many famous actors - NOT always a good thing.

memsaab, trupti: yep, truly awful- I honestly didnt think it'd be this bad- I mean Amitabh and Akshay right- but I live and learn :)

After seeing Waqt, Babul and this, I've decided that if BigB and Akki are both in a film, I'll skip it.

Omg that is so funny and yet so true! thanks for stopping by!