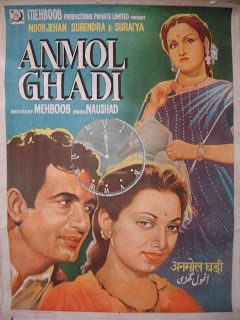 Title: Anmol Ghadi
Year: 1946
Cast: Surendra, Suraiya, Noor Jehan, Zahur Raja, Leela Mishra.
I was really excited about this Anmol Ghadi (trans: priceless watch) since I had heard so much about it over the years.
I honestly beleive that the reason this movie has held respect over the years are the songs- they are hauntingly beautiful, to say the least. I saw the movie a second time so that I could go through the songs again- and again.
The story itself- I got a headache keeping up with the whims and fancies of the scriptwriter :D
Chander lives in a village with his mom (Leela Mishra). One day his friend Lata leaves town, leaving him her dad's watch (!) as a keepsake, since he admired it so much.

Chander grows up (as Surendra) and spends all his time writing poetry while his mom still works and tries to keep the house running. Chander also brazenly accepts handouts from his friend Prakash (Zahur Raja), and one day, inspired by Prakash, he decides to go work in Bombay at Prakash's store, selling and repairing musical instruments.
Chander loves poetry written by Renuka Devi- which is in fact a pseudonym used by Lata (Noor Jehan). Chander does not know that Renuka is his childhood friend Lata, and that is what drives the plot from here on.
Chander writes fan mail to Renuka, but Renuka (Lata/Noor Jehan) doesnt want to meet this crazy fan- she is lost in the memories of her lost friend Chander (oh for pity's sake!).

She sends her friend Basanti (Suraiya), to meet Chander in her place.
Obviously, Basanti falls in love with Chander- and Chander- not so much.
Chander at least knows that Basanti isnt the real Renuka, and waits until he meets the real Renuka- and does find out that it is his lost friend/love Lata.
So now its loads of fun ahead- Basanti loves Chander, who loves Lata, who loves him back, but is engaged to- Prakash!

Ready to sacrifice, Chander clears the way for Prakash,

.. and at last Chander remembers to go back to his sick mom in the village, who dies before he can get her a doctor.
At this point, I just got good and mad and stopped caring. What kind of a grown man lets his old mom work like that, then leaves for another town and doesnt reach back to her, and then finally gets there when she is dying????? Who cares if this man ends up with Lata/Basanti/Prakash/the village idiot? [muttering and grumbling]
And that's really it- now that his mom is dead, Chander does go back to town to see Prakash and Lata- the question is- will Lata leave Prakash for him? or will Basanti follow Chander inspite of her good sense?
Notes:
1- The songs the songs! Noor Jehan's voice was at its optimum here, and I cant gush over her enough. India's partition in '47 saw her moving to Pakistan a few years later, which was a huge blow to Bollywood- she could have done more work were she in Mumbai, and we would have had more of her songs to love.
2- Chander's character just made me so angry- he is so very ineffective that the viewer cant help but be utterly frustrated by this man. A loving mother, a good friend, and 2 cute females who love him- and he has really done nothing to deserve it all, but wallows in self pity. Ugh.
3- Prakash has a better character- loyal, loving, intelligent. Though I do wonder if he had been harsher with his friend Chander, the latter may have turned out to be a better person :S He had a clasically scheming mom, but it may have done him some good to listen to her occasionally :D
4- Why, oh why do Basanti and Lata love Chander????? Have they no sense? Why were they not making a play for Prakash all along?
5- Chander's mom, played by the ever suffering Leela Mishra- lady you should have kicked out that kid when he turned 18. Seriously.
6- The title of the movie is almost incidental- unless you really start thinking about it. Its really a typically moralistic 40s tale: From childhood, Chander wanted more than he had, and would get it by wheedling (at least not by theft- a la "Oye Lucky," decades later). He got used to begging and wheedling- sometimes his mom, sometimes his friend Prakash- until he finally realised he had to stop sponging off others- but too late.
Posted by Shweta Mehrotra Gahlawat at 5:37 PM

Have this movie in my collection for the same reason you mention - the songs and 'the nightingale of Pakistan', Noorjehan. I agree with all your points and cannot say enough about the songs. My aunt told me that Madame Noor was immensely popular in her day and many in Bollywood say that she could have been more popular than Lata thanks to her range & acting ability. Partition strikes yet another blow to my world :(

But I enjoyed watching this movie just because it gave me a glimpse at the India of my parent's youth and one that I will never see. Plus just seeing how films were crafted at that time was alot of fun too. This movie goes on record as THE oldest Bollywood movie I have seen and I agree, Chander was a tool. 2 beautiful and talented women were pining over him? People breaking out in song I can believe, that plot point? Not so much ;)

Thanks for all the wonderful music, Shweta. I've been listening to 'Jawaan Hai Mohabbat' and 'Aawaaz de Kahaan Hai' ever since I was a child, and I've never grown tired of them, they're absolutely brilliant! Asha Bhosle had a segment of her concert earlier in the year dedicated to 'Malika-e-Tarannum'; Noorjehan here and elsewhere is phenomenal!

Almost want to agree the plot doesn't make sense, but I'm such an ideal audience for filmmakers (Drona challenged that), I'd totally still buy into it (not!), LOL.

Have never seen this. Must then, after reading your review. Don't Hindi film heroines always make exasperating choices in men?

Sanket!!! its so good to see u after so long! I agree w/ u on Noorjehan and partition- such a waste. Her songs bring chills to my spine- she is incredible! Chander- oh he just makes me so angry :/ I am trying to review an even older movie, which is tring my patience as much- rofl

Bollyfan: Trust me- if u sit through this movie without losing ur temper when Chander's negligence costs him his mom, i'd be amazed (still so much anger :D). Awaz de kahan hai is haunting- I personally found it better in video than audio.

Banno: That is true- but I still HOPE theyd wise up! :)

Oh, thank you so much for posting the songs! They really are beautiful and fun (despite my understanding one word in four).

I wonder if I should translate- I dont normally, but I've really fallen in love w/ NoorJehan's voice.