I wrote this almost 2 weeks ago, and intended it to be originally a sequel to the Lekin post. But then the Bombay attack happened, and I just wasn't in the mood to post something quite so depressing right away. 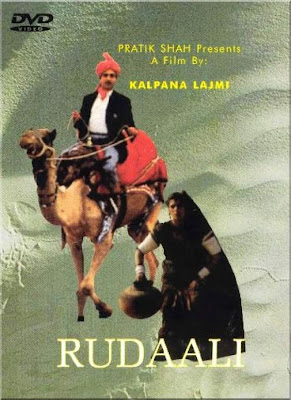 Seriously though, this one feels almost like a sequel to Lekin- a lot less glitzy, a lot more serious, but similar in the locales (that was Bikaner, this is Jaisalmer, both in Rajasthan), the protagonist (Dimple), Gulzar's lyrics and another classical music director- Bhupen Hazarika, as opposed to Lekin's Hridaynath Mangeshkar.


Dimple is Shanichari (meaning: Born on Saturday, the day of Shani- an unlucky day), and as unlucky as her name. Her father died in her childhood, after which her mother abandoned her to become a roaming gypsy. She married an alcoholic when she came of age, and has a mentally retarded son.

At this point in the movie, she falls in love with the local landlord's (Amjad!) son, Raj Babbar.

She is about to elope- when her husband dies, and she decides to sacrifice her dreams in order to bring up her son.

Years pass, her son, Raghuvir Yadav, grows up to marry a prostitute, Sushmita Mukherjee (doing BRILLIANTLY in her cameo). When Dimple protests, he runs away, and Sushmita aborts their child, Dimple's grandson.

Dimple's only solace comes in the shape of Bhikani (Rakhi, also utterly amazing, and sassy to boot)- the nearest roaming Rudaali- the title given to a professional female mourner in parts of Rajasthan. If the family cant (due to status) or wont (no love!) mourn publically for the deceased, never fear- the rudaali is here.

So when Amjad dies, the Rudaali is called- but instead of Rakhi, it is Dimple who finally sheds tears- after having never cried in her life. So what causes her tears?

Notes:
1- A NFDC (the National Film Development Corporation) production, it swept the National Awards that year- makes me remember other NFDC gems- Jaane Bhi Do Yaaron, Kamala Ki Maut, Pestonjee, Party, Main Zinda Hoon, Mircha Masaala, Nassem- maybe they are still making quality productions- I need to revisit some of these, and check out their new stuff.
2- This movie takes Dimple back to the desert, and is basically a brilliant showcase of her talent and beauty. She is gorgeous, and this has to be her best work.
3- This is also undoubtedly Bhupen Hazarika's best music in a Bollywood movie, and also definitely the most successful, in terms of popularity. Most of the songs are sung twice- once by Bhupen and the 2nd time either by Lata or Asha, but I prefer Bhupen's version over the female voices- perhaps because it is his music, he seems to capture it more nuance. And Gulzar, like he did in Lekin, writes poetry.
4- You have to be in the right state of mind to watch this movie- it moves slowly and can be almost hurt you with the pain it projects.
Purely personal aside:
I don't agree with all the pain and angst in this movie. Dimple's character- no human being can spend an entire lifetime with just tears. Her utter lack of luck or happiness makes little sense- everyone has SOME happiness. The protagonist's utterly sacrificial behavior too is hard to digest for me, because of my own experiences: when I was growing up, our neighbor's household help eloped with her eighteen year old daughter's tutor, leaving behind the daughter, a teenage son and a fairly well-earning, decent husband. No judgment here- Sharda (the lady in question) then proceeded to live happily ever after with her lover, and never looked back at her family. Dimple's character isn't so far different from our Sharda in terms of social or monetary background- so its difficult for me to sympathize with it.
Oh heck, I quibble too much- I just prefer happy endings, that's what :)

Posted by Shweta Mehrotra Gahlawat at 6:17 AM

When I read your post about Lekin, I too immediately thought of Rudaali what with the Dimple Kapadia, Rajasthan, and the desert association, although the subject matter varies greatly. I understand though your reluctance to post about this soon after the Mumbai attacks, given that the idea of mourning is inextricable from and so strongly embedded in the film.

As with Lekin, I saw this when I had just started middle-school and have only retained the memory of its haunting 'Dil Hoom Hoom Kare' and of course, the ending. Anyway, shedding childhood prejudices aside, I look forward to revisiting this movie and seeing it with much greater sympathy and wider outlook although as you said, you need to be in the right frame of mind to watch it.

On another tangent, for some reason, I somehow also club 'Maya Memsaab' (1993) along with Rudaali and Lekin, what with a woman (literally and figuratively) haunted by her life and its contours in each. Would be interesting to see your views on it!

I always confuse this with Lekin - because of Dimple, Rajasthan and the lovely music. In fact, when I read your Lekin post I wondered why you didnt talk about Dil hoom hoom kare! lol

Priyanka: When Mayamemsaab happened, I wasnt of age to go to a movie hall to see it (it was certified Adult). Therefore I (perhaps foolishly) decided to read Madam Bovary before seeing the movie on video when that would come out. Big mistake, because reading the novel completely put me off seeing it :) Now that you have reminded me, I shall focus on the great songs and attempt to see it at last!

Bollyviewer: lol- it is SUCH a seuqel :D Which reminds me- Dimple did the "Rajasthani woman" act in a lot of 90s movies- funny how that worked out!

Shweta, I grew up in the Middle East and we watched like every single new Hindi film on vid every week so that's how I ended up seeing it:) In my case, I noticed in the opening credits that it was *adapted* from 'Madame Bovary' and that intrigued me about the novel; of course, once I read and studied it in school, I then understood what an elastic term, 'adapted' is! But still worth a watch, for the songs, early SRK, and also, the ever reliable Farooque Sheikh.

Anyway, apologies for spouting too much gyaan on 'Maya Memsaab' when we are supposed to be discussing Rudaali:)

Priyanka: So it isnt much like the book then? In that case I shall look out for it. The book just made me angry, so I hadnt thought about the movie since. I feel we are OK discussing Maya- after all we're still in the realm of (supposedly) feminist cinema :)

Whenever I encounter films adapted from books, I always wonder if the film-makers perceive the project as not taking liberties with the novel's plot while simultaneously imbuing it with their personal vision or seeking to capture the novel's spirit without strictly following the chronological structure. It's been a while since I have re-watched 'Maya' but in this case, I personally feel that the film-maker, Ketan Desai attempts both though to what degree of success depends entirely on the viewer!

Incidentally, Rudaali too is based on a short story by the renowned Bengali writer, Mahashweta Devi. I would love to read the story as well.

I cant read Bengali, but have read the Hindi translation of Rudaali and other works by her. I remember finding them similar in spirit to Mahadevi Verma's works, though Mahadevi was more feminist and Mahashweta (they both have such similar names!) is more of a social activist for the poor.

Unfortunately, my scope of reading Hindi is limited to signboards/newspaper articles (which are becoming increasingly Hinglish) which really restricts my access to Hindi literature - however, armed with a Hindi-English dictionary, I would like to give it a go.

I haven't previously heard of Mahadevi Verma but I think you might be right in saying that I may have confused her with Mahashweta Devi. Will definitely look up her works, at least in English for the time being!

nahin nahin- i didn't mean to say u were confusing the 2- I was merely making a comparison. Another comparable writer is Amrita Pritam, whose feminist works have made it to the movies ("Pinjar" was hers I think).

Yes, that IS what you meant, I *really* should read over my comments before I hit publish;) Anyway, my background is in gender studies and literature so it's very interesting to learn of these feminist writers.

Yes, I had known that Pinjar was based on Amrita Pritam's work and I would be interested in reading it. I hope that these writers' works are available in translation - the publishing house, Katha should be a good place to find out, I guess.