RGV isn't the only one who has strived to remake Sholay (1975): Subhash Ghai did it 2 decades ago, and very successfully, with Karma(1986), twisting the original plot with an extra helping of jingoism, a very distracting Sridevi, a happy ending and 80's excesses! I love this movie utterly- must have watched it over 5 times, each time with delight. 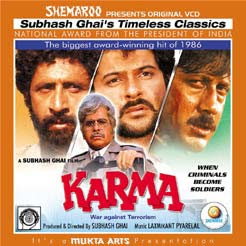 A lot of stuff is going on here, so pay close attention.

Dilip is the superintendent of a jail somewhere in India, and is married to a gorgeous Nutan. They have their children (who are in also the police), and grandchildren living with them, and are universally loved, especially by the prison inmates (!) who respect their essential goodness. Every one sing the completely hummable, Ae Watan Tere Liye together. 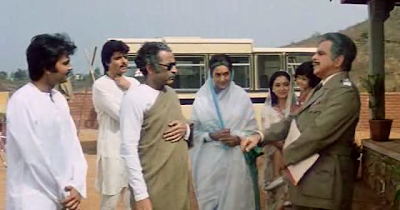 But things cant remain happy forever, and bad news comes in the form of Dr. Dang (Anupam! deliciously evil!), who has been caught and will be imprisoned at Dilip's jail. Much jingoistic and provocative dialogue is spewed, and we all all set for SOME major tragedy to strike. 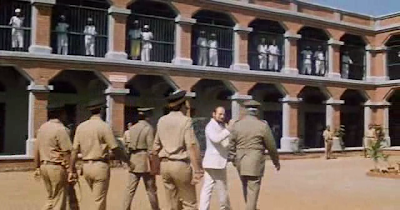 And so it does. Dang escapes, killing half the inmates and most of Dilip's family. Only Nutan and his youngest son played by Jugal Hansraj (who was still gorgeous then) are left alive- she cant speak and he is crippled. 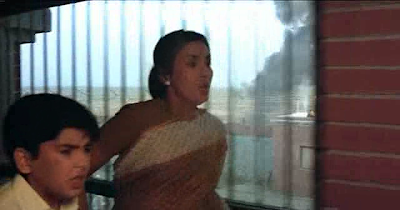 Dilip is good and mad, and since now this is a matter of personal revenge, he takes off to form his own army (great filmi ploy that) against the advice of his friend Tripathi (played by beloved Vinod Nagpal, I love him). He recruits 3 inmates: Baiju (played by Jackie- "Baiju"! I have a evil cousin-grandpa by that name, but the name is still cute), Anil, and Naseer (in full commercial cinema mode here). For some reason, he has picked inmates that he doesn't know, and cannot rely on at all- you'd think he'd get someone he trusted- oh well. 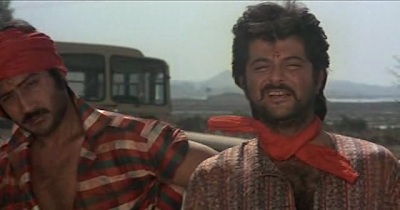 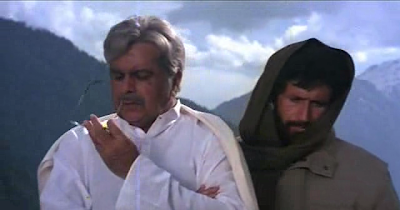 He takes them off to "somewhere near the border," and stays with Dara Singh, a former inmate who IS from his trusted group. There they set about to spy (not sure how) and train (involving a lot of running) the 3 inmates, who become very close (ahem!) friends :D 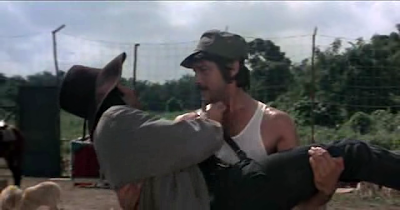 So of course Jackie finds the gorgeous, fantabulous, amazing Sridevi and falls in love. 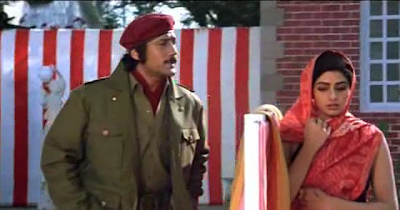 And Anil finds the sweet Poonam and does likewise. 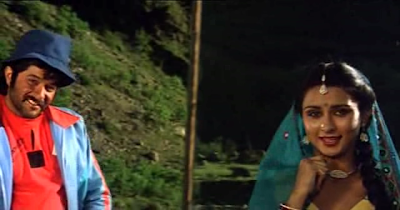 Naseer finds no one but revisits his dead girlfriend's memories. 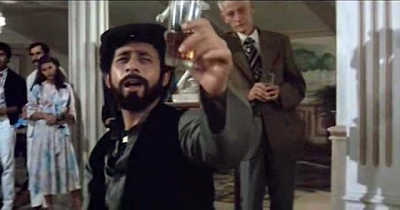 But the country and revenge come before love! And Dilip ensures that his 3 pupils learn their lessons, come back to the straight and narrow and do or die for their country.
Notes:
1- Was it just me, or does it appear that Abhishek has copied Anil's moustaches from this movie, and made it into his regular look?
2- This movie makes me realize the potential of the Jackie-Sri pairing, hopelessly under- exploited. Too late for that, since Jackie seems out of the acting scene, and while Sri is hotter than ever, I don't see her doing a movie w/ him ever again.
3- Jugal Hunsraj was SUCH a beautiful child! and judging from this and the fabulous Masoom, a pretty good actor- WHY did he grow up to create movies like Roadside Romeo (2008)- which he wrote, directed and sang for- eugh!
4- This was one of Nutan's last full-length roles- she was still very lovely here, and appears to simply glow from within- miss her.
5- Poonam did what she was asked to no doubt, but I prefer her spunkier than this. Cute though.
Pros:
1- Its unadulterated masala, from when Subhash made good masala. There are so many of my favorite actors in this movie, but I never felt that anyone was shortchanged.

2- Sridevi hams it up, and OWNS the screen every time she walks into the camera. Seriously, this was such a testosterone-overload movie that you have to give her props for making every screen moment count. She is utterly ravishing, hilarious and totally fun.

1- The "good Indian, bad neighbor" theme may make some uncomfortable, but there were plenty of such movies in the 80s and early 90s, and this was perhaps the least jingoistic of them. 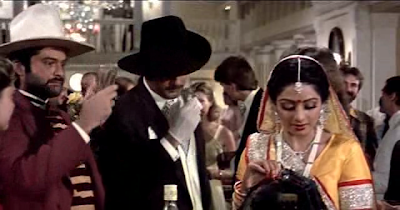 2- A rare Bolly visitation as Sri's uncle by Satyanarayana Kaikala- he is comically, deliciously, evil :D 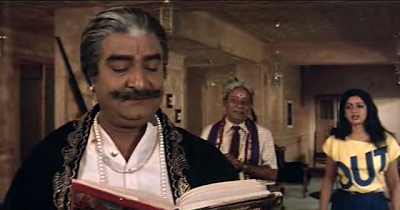 3. Dang's army: their logo is a Star of David (!!!), they love chandeliers, and they are lead by Tom Alter and Shakti- what could be better?! 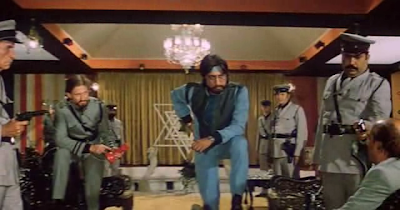 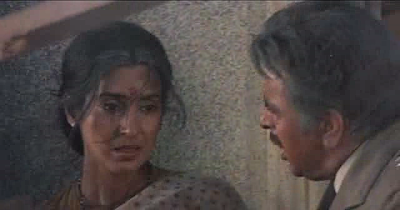 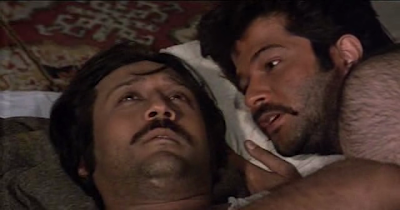 6. Anupam, who is fabulous as Dr. Dang- I had forgotten what a brilliant cartoony villain he could be! 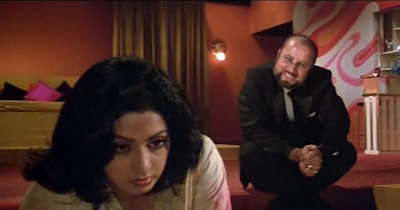 7. The eye-candy that Jackie was (sigh). 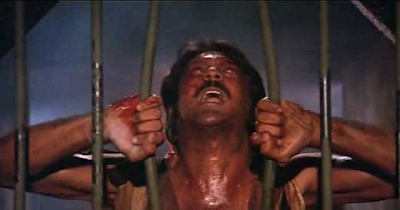 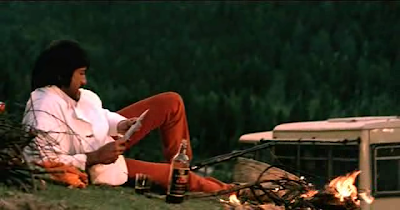 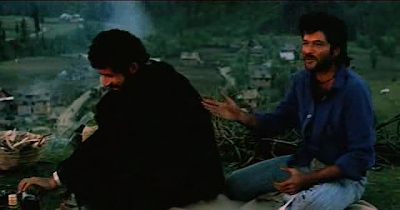 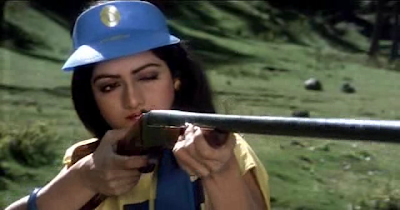 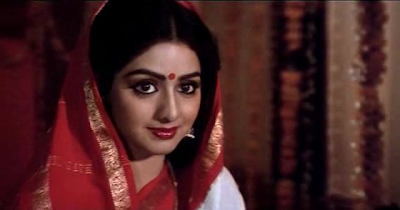 This DVD has been sitting in my closet for close to two years. I've yet to watch it, and don't know if I ever will. **rueful laugh** I got it because of Sri, but for whatever reason(s), I just couldn't bring myself to stick it in my DVD player. **shrug** Oh, well.

Sri looks so cute. I love the last two caps :)

Ooh, this was indeed a lot of fun. And bless you for articulating the subtle awesomeness that is Naseer... just chilling. I too loved those scenes for the same reason: watching him relax (and quietly laugh at Anil) was so oddly heart-warming!

You didn't mention when Anil turned into a bumblebee bandito though!!!

lapetitediva: I love Sri so so much- she lights up whatever she is in. Karma isn't a bad watch- do try whenever u have some time.

PPCC: omg I never realized u wrote about it- i am usually quick to jump over and read what u post! funnier still- we have more than a couple of the same shots! On Naseer- I think that's exactly the attitude he had when he did all those out and out commercial things in the mid 80s-90s- just doing it for the money, cruising through the film, and yet not being able to help being utter adorable.

I have this and think I may have watched it, but definitely need to rewatch it if I did!!! :-) Thanks!

Memsaab: That's a lot in favor of the movie, coming from u- since I know you are not big on 80s-90s! its such a fun mad movie though :)

Nicki: What a major compliment- thanks! heeh. I swear the moustache was all i thought of everytime Anil came on screen- its uncanny!

ohh this was fun, but to me some piece was missing! i loved the scene where they dress up as gorillas, it was my fave scene as a kid! and "the god is greaT" guy has made that phrase into my language!

That is a beautiful Sridevi header up there.....and this movie.....man, you brought back memories, I love this one and I have it sitting in my closet....time for me to watch it again!

Jeez, Look at Hairy Anil's shoulders in that bromance clip......Jackie is a favorite and I ADORE Sridevi. :)
have a lovely weekend!

Rum: The bear episode was totally intentional- I somehow cannot deal w/ hot Jackie wearing such a ugly disguise- so I try never to remember it! :D lols. Totally w/ u on "God is great"- The baddies here are potentially the most lovable ever :)

Trupti- Oh yes- that hairy shoulder- I am sure lots of folks still assume he is wearing a patterned shirt :D Worshipping Sridevi right along w/ u- have a nice weekend!

I saw your first screencap and went - o Vinod Nagpal was there, and then saw that you love him too! :-) I hope he gets to sing at least one Saigal song...

Just checked imdb, in all their years as leading actors Nutan and Dilip Kumar never worked together, I wonder why. They seem to have come together only in the 80s!

And everytime I see Anil shirtless I can see why the current fashion of men shaving their torso is absolutely essential!

Vinod is so adorable! I don't think he sang in this movie, not that I recall :(
Ur observation about Dilip and Nutan is very interesting- maybe a secret feud? Maybe they secretly loved each other???? :D
Anil's shoulders scare me the most- For a split second, I had really thought that he was wearing a shirt-heeh

Oh thank God for the wax kit Anil finally discovered. And I have *got* to see this movie, it looks like a cavalcade of fun.

Ajnabi: Rofl. It was a fun movie- u will like I hope.