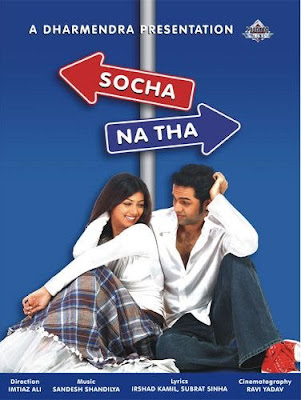 Its great to be posting again, after a work-focussed hiatus of almost a month now. Appropriately, the posts recommence with Socha Na Tha, the first of the long-promised Abhay-festival.

Despite considerable flaws (but those later), Socha Na Tha avoids being a cliched "young love," story. Here's how-

The movie opens with Abhay and Ayesha primping away in the mirrors of a club's restrooms (separately of course, we are still in Bollywood). 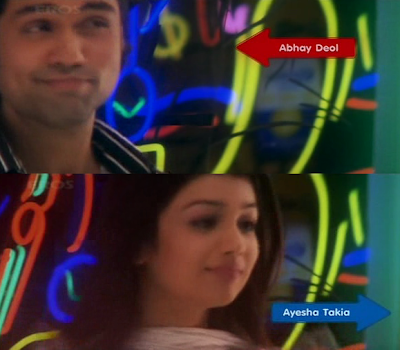 We follow them from the club to the street the next morning to a mall later that day- we are being taught the "so near yet so far" catcheism which will apply to these two through pretty much the rest of the movie. Nicely done, with music taking the place of dialogue, binding scenes seamlessly. 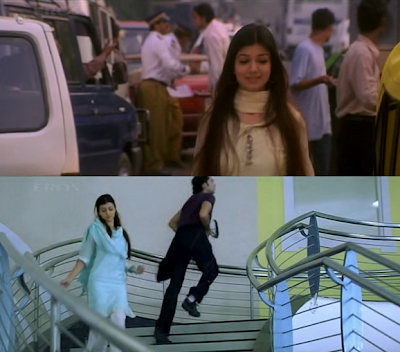 But Abhay has other things to be worried about, besides almost running into Ayesha. No, it isnt his terribly stylist's choice in hair or clothes (which is what SHOULD have annoyed him- it annoyed me no end).

Abhay's worry is Karen, who he has been dating for 3 years, but cannot bring himself to propose to.

Meanwhile, things arent particularly lovely at home either. Abhay's dad, who he addresses by name (a harbinger of scenes to come in Dev D? yes definitely) wants him to quite wasting time and join his office (the family is KKKG status rich- a cliche well if any). Mom agrees, sitting tight in hair-rollers (and scaring me) while sister-in-law Ayesha wears gorgeous sarees throughout the movie, demurely buttering toast (here) or cutting vegetables (elsewhere) [sigh].

The family decides that the best way to make Abhay grow up is have him marry(!) and so they trott him to Ayesha's house, where she lives with her Uncle, Aunt (Rati Agnihotri, too young to look her Aunt or Raj's mom), her cousin (Raj Zutshi), his wife and her cousin Sandhya Mridul (in a role she is wasted in). Surrounded by their teeming relatives, Abhay and Ayesha are both bored and uninterested, but nevertheless end up in Ayesha's room talking, where Abhay tells her about Karen, they agree that he will refuse the match and they become friends. 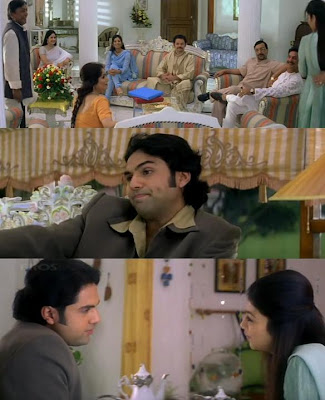 Abhay's refusal sits badly with the families- they move in the same social circles, and begin to feud all over town, badly though genteelly. 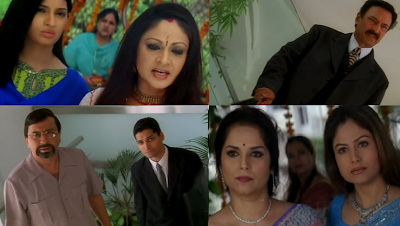 Meanwhile, Abhay and Ayesha also begin to meet, but as friends. The adjacent changing rooms was a cute idea reminicent of 12 O' Clock (1958)'s bathing scene. It makes little sense here (men and women have separate changing stations pretty much in most of India I believe), but is cute regardless. 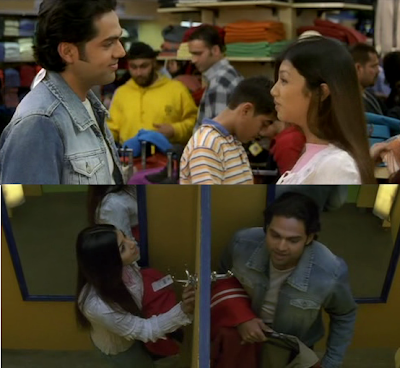 Soon enough, Ayesha witnesses Abhay's helplessness around Karen, and agrees to help him.

Via a lot of convulated reasoning, Ayesha'a efforts to bring Abhay and Karen closer involve her going with them and their friends to Goa, where we only see Abhay and Ayesha getting closer, though no complaints there. 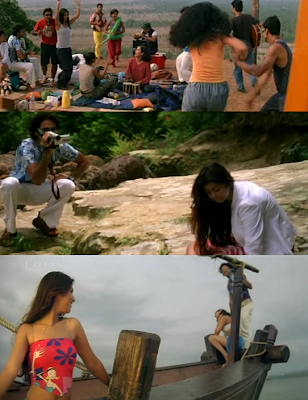 Unfortunately for them, Ayesha's family finds out and to make matters worse, Abahy shows up at her house to explain matters, but behaving like a jerk instead (shades of Dev D anyone? Yep, I think so). When her family shows up at his house to complain, he behaves even more badly, making things really tough for Ayesha, who pretty much agrees to get married to whoever her Aunt and Uncle decide for her. 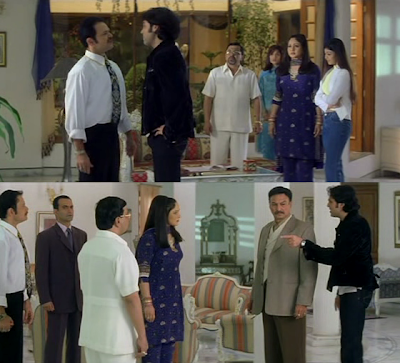 Meanwhile, Abhay does well for himself: proposes to Karen, meets her parents and wins their approval.

But he begins to miss Ayesha, preferring to watch her videos from Goa rather than focus on getting his family to agree to his wedding with Karen.

And he does win Ayesha over as well,

... but too late- he has come back to where he started at: his family has agreed to have him married to Karen, and hate Ayesha wholeheartedly.

!!! SPOILER ALERT!!!! SKIP TO "PROS" BELOW IF YOU STILL HOPE TO SEE THE MOVIE AND DONT WANT TO KNOW ANY MORE!!!
So follows comedy with Abhay insulting karen's parents in the hope that they'll break off the wedding,

... and when Karen's parents still dont break off the wedding Abhay basely jumps off the roof and runs away...

... to Ayesha's house where her aunt has match-made her (Ayesha's) wedding with her (Ayesha's) ex-boyfriend. [Love Ayesha's bedroom wall- its tribal art from Bastar, Madhya Pradesh- am going to paint 1 wall in my house the same way.]

Not wanting her aunt and uncle embarassed further, Ayesha throws Abhay out, and for once the hero of a Bollywood movie does the smart thing, which saves the movie again by preventing a time-tested cliche. He confesses all to Karen's family, who throw him out as well.

And again unlike a Bollywood hero, he goes back to hearth and home,

Meanwhile, Karen upholds the tradition of the Bollywood "other" "nice" "Christian" woman, and goes to tell off Ayesha- that Abhay loves only her and she should see sense.

And of course Ayesha does, after a quick hug to her sympathetic cousin- couldnt resist another screenshot of my favorite wall, sorry.

By divine intervention (I kid) she knows Abhay is in his office, being congratulated by his dad and brother for a job well done.

Abhay is very cool and properly dismayed to hear that Ayesha has run off from her engagement party to be with him, and wants him to elope.

Nevertheless, he argues with her right into the waiting taxi....

.... as his dad and brother watch with mellow resignation.

And that's it! Love abounds and wedding pix follow :D

And In Conclusion: Watch it, and even if you get tired somewhere in the middle (as I did), muster through for the refreshing end.

The run away ending is the most lovable thing in this movie. Thats so unusual for a Bolly movie. Usually that sequence comes in intervals. And here, after a riot [ala JWM] both run away and most famous song comes at the end !! Love Love it.

Well, I dont think Abhay's style is 'that' bad. Its just he is having 'newbie' syndrom. ;)

And yes, we still do have common changing stations for men/women. So there movie is right. Abhay is really showing is DevD signs in this movie in manic scenes. Nice observations there. Aayesha looked lovely lovely, just like her room walls ;P [i have noticed them too, while watching, lovely indeed].

And besides the ending, Music of the movie is awesomely weaved well with the narrative. Lyrics are so simple that goes straight in your heart. Especially, 'Na Sahi' and 'Seedhe Saadhe Dhang se..'

I really liked this movie when i saw it. i thought ayesha/abhay were very cute together and i loved the way the characters were portrayed. it made me look forward to jab we met.

His hair looks like he's landed in the 70s! With such long hair, he needed curls.

This movie sounds like my type - romance in the Jab We Met-style. What if Abhay had done Shahid's role? He'd certainly have looked the character's age and despair better, but then there would have been no dances!

I liked this film over Ahishta Ahishta - looooooooove Abhay and Ayesha - want them to be in more films together.

Can't wait for more of the Abhay filmfest. :)

Darshit: It was fun! I've seen the movie 3 times in the past week, and have come to really appreciate its simplicity.

JJC: Agreed on all counts!

Bollyviewer: What a interesting thought- I think we'd enjoy watching movies together - I really like how your mind works!

Nicki: Another gr8 idea- I hope they do another movie together- those 2 are super adorable together!

Hi Shweta,
Landed on this while blgging, what fun, reminded me of that incursion I had made into "Ayesha's soul"!!
Have you seen Dor, where she plays a nice role too?
cheers

Yyes I wept, bawled & smiled through Dor- Ayesha and Gul and Shreyas are all so very adorable, and all very brilliant actors!My fav was the scene where all three break into a dance in the middle of the desert dunes. Ayesha shines in whatever she does I think, even in capers like "Sunday" and ensembles like "salaam-e-ishq."