Bollywood Comedy- I: The early years

Early Indian movies came out of dramatic theaters that had transformed themselves into movie houses. Therefore it was natural that the directors attempted to balance the navras (9 rasas, or the 9 primary emotions) that they had practiced in theater in each film, of which one was hasyva ras (comedy). The vidushak (comic) has accordingly been an integral part of Indian cinema since those beginnings.
Through the 40s, the vidushak tended to play extended cameos- he could be a joker in a king's court, a juggler on the street, a fumbling servant, a greedy merchant. The comedy was incidental in movies which tended to proclaim social messages, and the leads were themselves usually too tragedy struck to have many flippant thoughts aside from initial flirtations. The 50s however bought change, and 1951 comes across as a year which would influence the turn of the coming decade. In Sansaar (1951), there is little scope for laughter, where the heroine, tortured by in-laws, seeks to piece her family together again, with the entire mess eventually ending happily ever after. The romance and comic elements are provided by her simpleton brother-in-law, Surendra. In one scene, his village buffoon struggles with the pedestal fan in his potential father-in-law's office, with antics suspiciously reminiscent of Chaplin. Indeed, Chaplin would influence other leading men to rethink their comic prowess- among them, Master Bhagwan and Raj Kapoor. 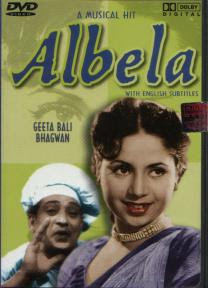 The same year Master Bhagwan played the unlikely hero in Albela. The movie was a huge hit, and Bhagwan played both the vidushak and the lead- with his comic timing with Geeta Baali and her manager perfect. Playing a poor man out to become a popular singing star, Bhagwan particularly shines in the scene he visits Geeta's house- he is mistaken for a cook and fumbles with utensils in full Chaplin mode. 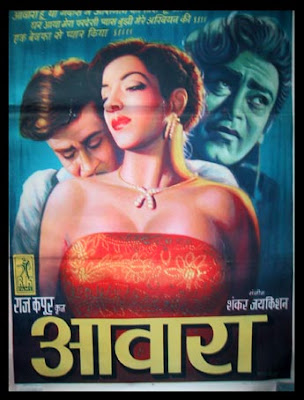 Another movie came out that year that ushered in the idea of the unhappy vidushak with a dark side- Raj Kapoor made and starred in Awara, where he capers and cavorts to fool Nargis (but not the audience, who is in on the joke) one moment, and in another is convicted on an attempt to his father's life. He had already tried physical comedy with the 1950 dud Dastaan, but with the success of Awaara, he could afford to experiment with humor in Shree 420 (1955), Chori Chori (1956) and Anari (1959) in that decade. I do believe that some portion of his genious lay in the fact that he successfully recognized the potential sadness behind a vidushak- more than a decade later, he would later fully exploit this knowledge in his most famous disaster, Mera Naam Joker (1970). 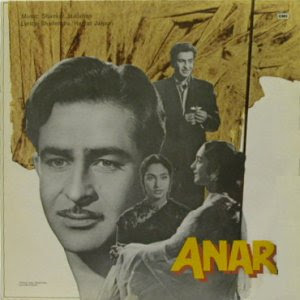 The most important comedic event of the brilliant year of '51 was the "discovery" of an actor who would define the path Bollywood comedy would take for generations to come- Badruddin Jamaluddin Kazi, a conductor in Bombay's BEST buses, found a foothold in the industry in the noir thriller Baazi. This was not a comedic role however- he played one of the thugs working for arch villain KN saigal, but he would soon begin to pick up comic roles, and rename himself Johnny Walker- immortalizing oil massages (!) in song in Pyaasa, and even starring in a movie named after him (both in 1957).

There was another actor struggling in Bollywood at the same time- Mahmood, who got his break in the glorious Do Bigha Zameen (1953). He was accompanied in the movie by another struggling future comedian, a very young Jagdeep. Like Johnny, Mahmood too would not find his comedic chops until much later- I'd argue the 60s, with Dil Tera Deewana (1962). Jagdeep played a small time hero until the 60s came around as well. 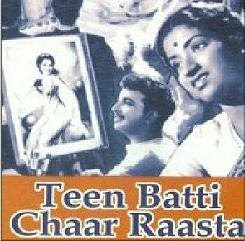 The 50s also introduced us to the female lead who could also make us laugh- in 1953's Teen Batti Chaar Rasta, Sandhya in black face played a "ugly" girl with a golden voice who works as a servant during the day and is a radio star in the evening, all with definite comedic flair. She couldn't be too funny of course- she was the leading lady, and had to unite the household she worked in where 3 of four brothers had married women from different Indian states, speaking different languages (yes, it was a comment on national integration, how did you guess?), all while foiling the villain, and teaching the hero that beauty is more than skin deep. Other leading ladies would soon follow in Sandhya's steps- Madhubala (Mr. and Mrs. 55, Chalti Ka Naam Gaadi), Shayama (Aar Paar), Nutan (Anaari) would all embrace humor that decade, tempering it with girlish chirpiness in the initial half of the movie, and abandoning it completely as soon as they were wooed and introduced to the hero's folks. 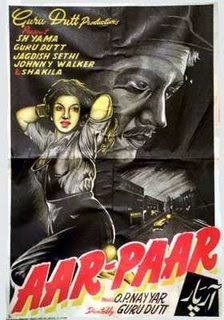 Raj Kapur had established that the romantic, angsty hero could also be funny- and it is fair to assume that his success convinced others as well: Guru Dutt's shone in roles with comic flair occurred in this decade, with Aar Paar (1954) and Mr. and Mrs. 55 (1955, of course). In the first, he plays a vagabond/auto body shop worker/driver who shares incredible comic timing with his leading lady, Shayama (in pants!). In the second, though ably supported by Johnny Walker (playing the "friend"- another beginning of a great Bollywood tradition), Guru Dutt displays greater comic turn, with Madhubala and Lalita Pawaar both bringing in humor to this movie which unfortunately belittled women's rights. The movie also featured Uma Devi (Tun Tun) in a considerably long running role as Lily, Johnny's prospective mother in law. She had already begun her innings with 1950s, Babul, but her talents, I believe, were finally properly made public with Guru Dutt's directorial genius.

And can we talk about comedy in the 50s without Kishore Kumar? Before the genius of Chalti Ka Naam Gaadi (1958), he had already established himself as the ultimate comic lead with Naukri (1954). A singer and actor all in one, Kishore ruled the 50s with comedies like New Delhi (1956), Mem Sahib (1956), Dilli Ka Thug (1958) and Shararat (1959). It was brilliant that Kishore could fill even the songs in his movies with the humor from his character- you could feel the joy in his voice, in his eyes, in his wild hair standing on end in a style that infected the nation. Situational slapstick remained the order of the day- the nation was still young and recovering from the independence struggle, and perhaps needed humor to be clearly defined- the mere act of laughter was perhaps still very new. We were learning to smile- subtleties could be learned later.

Bollywood of that decade cannot be mentioned without bringing up film noir. Whereas in the West film noir tended to exhibit dry humor at best, in Bollywood, it opened a new chapter for the comedian. True, the hero could do comedy as well- but not all heros could do so (Raj Kumar and Pradeep Kumar easily come to mind), and therefore the vidushak would survive with an identity of his own. He could now be part of the villain's gang, a worker in the club that the villain or hero frequented, a police informer, or an assistant of a detective- but most importantly, he could be a friend of the hero, who would himself exhibit a comic turn until the time the script demanded a turn for the more serious. This "funny friend of the hero" phenomenon would take on a life of its own, and gaining popularity in the 60s, would last well into the current era (Circuit from Munnabhai anyone?)- but those decades deserve posts of their very own.

*EXCELLENT*
Absolutely. Loved the post and waiting for more..

Sandhya in 3 Batti 4 Rasta was damn good. (i have that movie!!) and hilarious were the couples in the house.

Oooo! Interesting reading! I like the bit about balancing the 9 emotions... :)

I can't wait to read more about the funny friends and gang members!

This was an awesome post! Ive yet to see more guru dutt films; ive never really associated him with comedy going by his rep.
I cant wait to read the other parts..I know you will eventually mention my later favorites and more funny females like sridevi ;p

Unfortunately, the one movie I remember of his is Ek Thi Ladki (I think) which was with RK. I never did like Raj Kapoor's brand of humour. His Chaplinesque caricatures grate on one's senses.

But Guru Dutt did humour like he did everything : in style.

Darshit: Thanks! 3 batti is a bit addictive I think- I def appreciate Nirupa letting loose for once.

Filmi Girl: Thanks! am working on the 60s now!

JJC: Thank you- I absolutely agree w/ u on Sri- my love for her is explained by my avtar :D Guru Dutt could be v humorous in a quiet, yet straightforward way- i adore him

AKM: Thank you! I have always felt that IS belonged to the 60s- but ur right of cours- he did begin in the 50s, and I should have at least mentioned him, like I did Mehmood. And love Gurudutt completely.

Good to see you back in blogland and with such a lovely and thoughtful post, too. I had never thought of comedians as vidushaks bringing hasya ras to the films. When I wasnt fast-forwarding the (mostly) annoying comic side-plots, I usually thought of the comedians as carrying forward the Shakespearean tradition where some of the tragedies/dramas were relieved by a jester/comic relief. That said, I did love Johnny Walker in most of his 50s movies. He was funny without being annoying. His comedy did wear a bit thin in the 60s though. Another of my favorite comedians was 70s Asrani - also funny and non-annoying and a great actor to boot. Who can forget his Hitler ke zamaane ka jailor from Sholay!

Very nice and informative post :) Johnny Walker is one of my favorites, he never gets on my nerves (which is more than I can say for most)...the other comedian I always loved was Rajendranath. But of course that is the next decade :)

I'm not a big fan of Bollywood comedies. Some people tell me I don't get the Indian joke. That could be the thing. If the movies you listed is more like Munnabhi, then I'm all for it.

Bollyviewer: As much as I appreciate Johnny, I do think he was underutilized- he may have been a fine villain as well, in the Jeevan tradition! Asrani was SUCH a relief in the 70s!

Memsaab: The humor of the 50s is very physical and blatant I think- except for Johnny- esp in hsi outings w/ Guru Dutt- I so wish they had made more! Rajender nath was brilliant- especially as there were so many comedians in the 60s, and he still managed to make his own space.

Nicki: Of all the movies I've listed re: the 50s, you should try Aar Paar and Mr and Mrs 55- both are gentle and breezy and v fun.