I like supporting the underdog: for me, its always been "Fauji" before all of SRK's other work, Shashi before Amitabh, Amitabh's 1st 5 years of work before all others- you understand. So loving Lagaan (2001) was a foregone conclusion, even if one didn't take in account its inherent brilliance.
The story: Its the late 1800s-early 1900s, and Bhuvan (Aamir), leads a rag-tag group of his fellow villagers against the Brits in a cricket match, the prize being 3 years worth of land rent. Needless to say, the underdogs win, the Brits lose, and all's well that ends well. The movie became an instant classic, and triggered the sport-movie phenomenon in Bollywood.
And yet, its the Aamir the underdog's underdogs, his supporting cast, that I enjoy the most in every re-watch of this film. I wanted to take a moment and talk about my favorite supporting characters from Lagaan. I limited myself to 5, because really, there weren't any bad actors in the movie (except the Brits, who came off as well as any Westerns could in a Bolly movie (one day I may be proved wrong, I concede).

1. Raj Zutshi (character: Ismail)
The token prominent Muslim character, Ismail is Handsome with an H! The character is a fiercely loyal friend to Bhuvan, and a pretty good cricket player (with lots of coaching), despite being injured. Ismail rocks, and Raj rocks harder. As you may know already, he was married to Aamir's sister (since divorced), and is step dad to Imran. He has, like Ismail : Bhuvan, been with Aamir since the beginning: they both started cinema with Holi (1984), and he helped Aamir run away with Juhi In QSQT (1988). He has a considerable body of work, these are my favorites: Holi (1984), Goonj (1989), Shiva (1989), Maachis (1996), Rules (2003) and Daddy (1989). Goonj and Holi are probably where he met Ashutosh G. (who was an actor back then, with a full head of curly hair). I love the man- is that apparent enough? 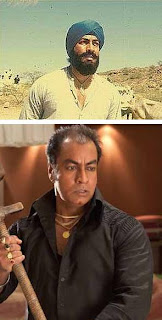 2. Pradeep Singh Rawat (character: Deva Singh Sodhi)
The Sardar who comes from Punjab to help Bhuvan! As hard as that is to imagine, it probably helped Ashutosh Gowrikar (the Director) to realize his Utopian village vision. You've seen this guy in tons of movies, haven't you? He's the titled Ghajini (2008 AND 2005), of course, and he is also in another popular Aamir movie, Sarfarosh(1999). He is probably a more popular Southern actor nowadays than Bollywood, and also has lots of TV credits to his name. Additional Aamir connection: they're very good buddies.

He is my favorite character in the movie! He does everything wrong possible: loves Gauri (Gracy) who is Bhuvan's girlfriend, plays villain, and even tries to sabotage the village team. However, in the end he redeems himself when he makes his apology, and completely captures my heart with his tears. I lurve the boy. Arguably, he is the one actor who profited the most from the movie: from unforgettable appearances, he suddenly began appearing everywhere, mostly in thug or police roles. My favorites for him: Gungajal (2003), Chameli (2003), D (2005), Welcome to Sajjanpur (2008), and Well Done Abba (2009).

Probably the most under-appreciated, yet critically acclaimed actors of all time. He more or less sleepwalks through Bhura's character- not in a bad way, but one gets the sense that this is too easy a role for him. For someone who began his career with Massey Sahib (1985) and followed it up with Salaam Bombay (1988), became a popular rage with Mungeri laal on TV (1990), and has been in numerous brilliant movies since (just IMDB him and look at his work), there cant be much that this man finds a challenge. Lets just bow to his brilliance and leave it at that. Everything he has ever done, he has done well. 'Nuff said.

In his autobiography, Gandhi holds Indian kings during the British Raj (rule) akin to liveried butlers. Dressed to the nines in jewels, they were puppets in the hands of their British lords who made them dance to their tune. And Kulbhushan plays that character brilliantly- despite his sympathies being with the village team, he has to sit with the Brits, and his discomfort is palpable. A short-spanned character; but there are no characters that Kulbhushan cant do well, regardless of their screen time. He has immortalized the shark-loving Shakaal in Shaan (1980), and done brief but brilliant work in Arth (1982) and Mandi (1983). He has the amazing knack of simply remoulding himself into whatever he is playing: whether it is a Raja in Jodha Akbar (2003), a corrupt minister in Manorama (2007) or a tea-seller in Jo Jeeta Wohi Sikandar (1992). He may do more movies; even better movies- but will always be to me primarily the reason to watch Shaan over and over again.
These 5 were a hard choice- I cant help but regret not having included Suhasini Mulay, AK Hangal, Rajesh Vivek, Rajendra Gupta, Akhilendra Mishra and all the others who made this movie what it is. If anything, the bringing together of this brilliant cast has to be commended. I leave you with the Lagaan "team," in a light, marketing moment: 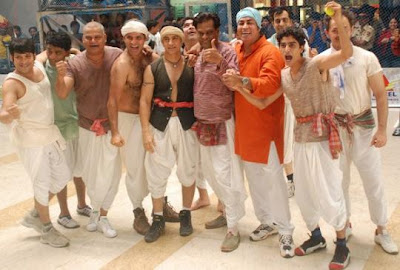 Posted by Shweta Mehrotra Gahlawat at 1:00 AM

such a great reminder that it's all about teamwork, and EVERYONE counts and plays a part that creates the ultimate picture! thanks for this post!! :) :)

triShie: Thank you for stopping by! I like your photo blog :) The team bit is what make Lagaan so watchable to me- its the supporting cast's interaction that keeps things interesting everytime!

Oh Shweta! I love this post and I enjoyed learning all the background details on the characters. I knew I loved that Sikh guy for a reason, kept wondering where I'd seen him: Ghajini, my goodness, I had no idea until reading this. I love Yashpal Sharma in everything I've seen him in, he does bad so well. How true, "there are no characters that Kulbhushan cant do well." You picked a great 5 to write about here! Well done friend!
All the best!
Sita-ji

Sitaji: No no ur the best! OK fine lets both b the best!
:D Like I said, we totally need to watch mvoies together- I love your take on stuff.

Pradeep Singh Rawat's most famous role so far has been as Ashwathhaamaa in Mahabharat. I remember he was summoned in an Aaj Tak special on a stranger found in north eastern regions of India who was believed by the locals to be the real Ashwathhaamaa, the son of Guru Dronachaaryaa who was doomed to live an immortal life with a sore on his head that never heals.

I also remember Raj Zutshi playing the title role in Grahlakshmi Ka Jinn, a comic serial with the housewife played by Reeta Bhaduri. I have only faint recollections of the TV serial, I think the jinn had to eat batteries to stay alive.

I think you forgot to mention Yashpal Sharma's performance in Ab tak chhappan or did you not like it that much?

Quark: Thanks for the comments! I remember Ashwatthama in Mahabharat, but that isnt a chracter I personally admire- I wont go into a long reasoning about why :D I think Raj and Reeta would be adorable together! that must have been a fun show- sort of a reversal of "I dream of Jeanie"- only better. And yes, ur absolutely right- I never warmed up to Ab tak Chappan- maybe one day I'll wake up and see the light....:)

TBF: Thanks for making this happen!
I'd totallt forgotten aboutZutshi in Just Married- he was one spot of light in an otherwise terrible film. Totally looking forward to Peepli as well!

Ah, the team !
This remind me of the moment when Lagaan lost oscar and all the actors were together at Aamir's office. :(

Among them all, Raj is certainly the best!
Hope Yashpal do something more than just same bad stuff.