Often, I realize I write posts specifically for public service purposes. It is no less than a PSA to write a review on excretory drivel like Sadiyan. The title mean "eons"- that's what the duration of the movie would feel like if you didn't have access to a remote control while watching this.

The movie opens during India's independence and partition in 1947. The Hindu family Rishi and Rekha moving to Amritsar after being driven out of their homes that are now in the newly formed Pakistan. Rekha and Rishi do look cute together, now that they've aged; I know she is criticized for her makeup, but the haters need to cap it- she is just adorable, makeup or whatever. They've just moved into a home which belonged to Muslims (who have been driven out of their home to Pakistan). Rekha's kid has died/is lost in the ruckus, and she is really messed up, but wakes up in the night to the sound of a child crying. it isn't a ghost (it may as well have been), its a little child who has been left behind, hidden in the attic by the previous owners. Herein lies the 1st big problem with the movie- HOW is that kid even alive? Barely 2 or 3 years old, hungry since forever, instead of being faint, its lungs are strong enough to wake up adults sleeping a floor away.

Anyhow, Rekha has a burning need to adopt this kid, despite every one's advice not to do so. Why she cant have her own baby isn't quite explained. Rishi tries somewhat, but cant find any Muslim family who will take the kid.

See they should have given the kid away, because with the aid of film magic, a quick transition later, the kid has grown into a highly unattractive Luv Sinha (one of Shatrughan's twin sons; apparently neither of the parents could spell). The boy looks 12, but is supposedly at least a teenager (he does wear a school uniform).
Lots of Luv-centric scenes later, the boy travels to Kashmir, and bumps into Ferena (sounds like baby cereal, looks like the Manisha Koirala's caricature). Love and terrible songs happen, involving costumes that are clearly 2010, though the characters should be in 1965 or thereabouts. Its very painful, and the viewer will not be able to bear the terrible dialogues, crap music, ugly leads and 80s production values. The sacrifices I make for humanity! 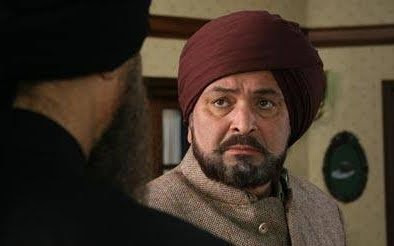 Turns out Ferena also lives in Amritsar. And is a Muslim. Due to opposition from Ferena's family and fear of inciting riots, Rekha figures the best way to resolve this is to prove Luv's Muslim heritage. So off go Rishi and Rekha to Pakistan, praying to God and government officials to figure out Luv's parentage. Sadly, this is short- someone must have decided that all this was taking too much time away from Luv. 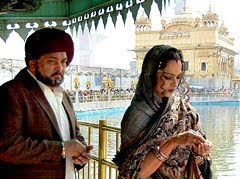 So they find the parents- a gorgeous, glowing and super elegant Hema (I swear she looks exactly like my mom in the screen-cap where she is praying- and no, sadly I take after my dad, not mom) and a handsome and also elegant Javed Sheikh. They make a seriously handsome couple. No kidding. 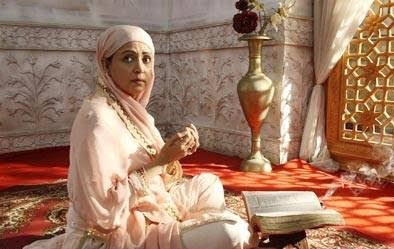 Hema and Javed come to Amritsar to get their kid married, and take the couple (Luv and Ferena- why anyone would want them, I don't know) back to Pakistan. A ridiculous amount of time is wasted on the two supposed leads, but anyone watching this monstrosity would have eyes only for the Rekha-Hema scenes- the ladies kill it with their awesome chemistry. The ladies are so riveting that the horrible dialogues go unheard. They need to make a sensible movie together. Maybe with Benegal or Lajmi. And they need to stop making favors to old colleagues like Shatrughan and acting in their movies. 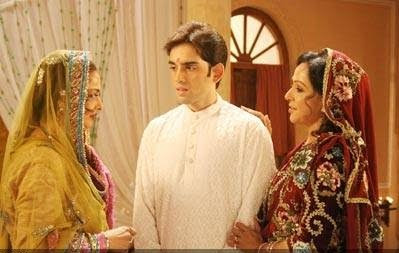 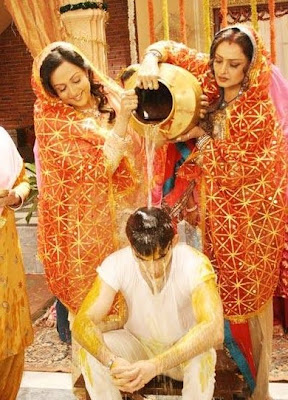 The movie ends as well as can be expected; since most people wouldn't watch this, rest assured that Luv and Ferena do get married (teenage weddings aren't a good idea, especially when the groom looks like an adolescent, but no one listens to me), and they do remain with Rekha and Rishi (why the heck do they want them??? whyyyy?). Hema and Javed go back home (secretly relieved I'm certain). 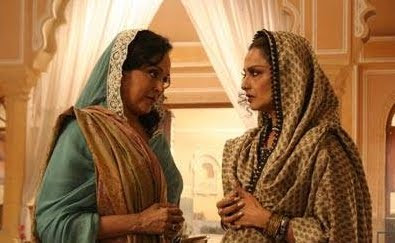 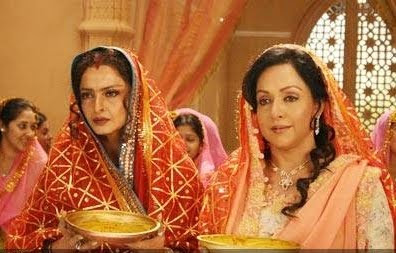 Pros:
Rekha. Rishi. Hema.
Cons:
1. On a serious note, Luv seriously needs to reconsider his career options. Granted that Amitabh and Salman were both ungainly in their first movie, but they could at least act enough to get another role. Actors like Hritik and Ajay were properly trained for years before they made their first movie. This boy has no sense of diction or acting, and doesn't have a beautiful body to distract us!
2. The execution is bad. The director's focus had so been to highlighted Luv that he apparently forgot everything else- costumes are incorrect, looks are incorrect; it doesn't work.
3. At one point, Ferena, who portrays a Muslim girl in the mid-60s, dances with Luv in the proverbial "College"fest,"" while wearing a tiny blouse and a low rise skirt. Good Muslim girls didn't wear stuff like that in the 60s, especially in Kashmir. My grandma was a young(ish) Kashmir Muslim in the 60s. She'd be horrified.
4. Everything else.
Posted by Shweta Mehrotra Gahlawat at 3:55 PM

Ha ha!!! I actually watched part of this being filmed at ND Studios in Karjat, Hema and Rekha with poor Luv in the scene you've capped (Rekha in yellow, Hema in red). So I thought I'd get this when it came out, but maybe not. Your review is hilarious :)

Memsaab: Thank you! Normally, I'd have been jealous of u watching the filming w/ Hema and Rekha there. However, this was so bad I am apt to sympathize! No one, ever, should have to watch pool lil luv.

Very entertaining and informative review - thanks. Now I won't feel guilty about giving this one a miss, despite the cast (apart from Luv) and possibly compelling content. Uh, if I'm not mistaken, I think that I heard in an interview that Luv is the name of one of Sita's twins and they like to name boys after her sons, in that family.

Christine: Thank you Christine! You are right about Luv's name of course, since the other twin's name is Kush I think. I was just being snarky (just!) when I said the parents couldn't spell :) Instead of naming him nice names, theyd have better invested by sending him to some acting school (sigh)

I had heard it was a flop, and how sad with that cast. So much potential. I still want to see it, maybe even more after reading this! At least there were a couple of nice songs from it, but I can't remember them now. I'll stop back in to comment after I go through the torture of viewing.
:)
All the best!
Sita-ji

Sitaji:u are a brave woman- I salute you, and bow low :D I cant wait to hear what u think of this. Do you ever fly down to LA? I'm totally impressed by your sheer bravado in watching stuff like this, and therefore feel a compulsion to watch a movie with u one day.