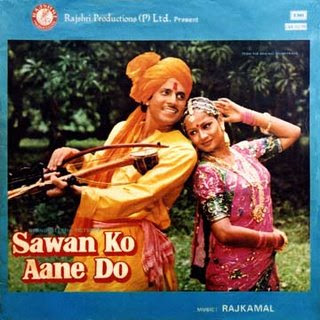 There are movies and movies, and a phenomenon fairly unique to Indian cinema is that most are musicals- 1 song can make/break the entire experience.

Once such film is "Saawan Ko Aane Do," where the story is set in rural Uttar Pradesh (my home!) in a village close to Lucknow. Our protagonist Birju (Arun Govil) is a poor village boy, living with his 3 brothers and their families. He doesn't work very much, but concentrates on his music. The village zamindar (a very young Amrish Puri)'s daughter Chandrika (Zarina Wahab) returns to the village and is enchanted by Birju and his voice. And really, with songs like these, who wouldn't be? 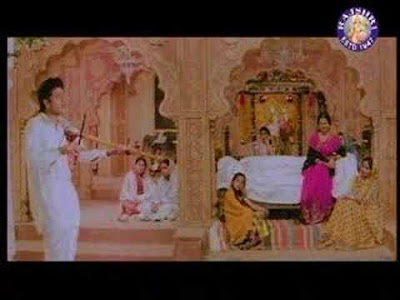 Chndrika and Birju fall in love, and Amrish is very unhappy about it. He sends Chandrika back to school, while Birju beats his path to Lucknow to become a singer (what- no pop inspirations?!).

Birju meets Geetanjali (Rita Bhaduri), who helps him in his ambition, and also falls a little in love.

Years pass, Birju is a huge success, and comes back to his village for a charity concert to find that Amrish has lost all his money, and that Chandrika teaches. Doesn't take much- 1 last song, and they walk off into the horizon! 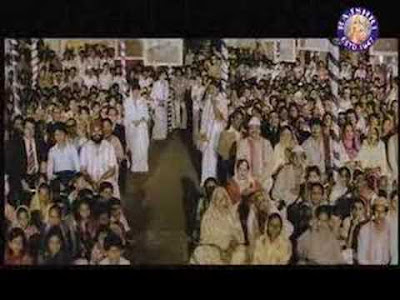 Thoughts:
And in conclusion: Just hear the songs, don't bother about the movie.
Posted by Shweta Mehrotra Gahlawat at 2:36 PM

"Just hear the songs, don't bother about the movie." That is exactly what I've always thought of the film, even though I've never seen it! Arun Govil is rather un-inspiring as a lead (he was worse with his Mona Lisa smile in Ramayan) and Zarina Wahab though competent, just isn't enough to make me want to watch the film.

Does one add another Rajshri film, also with nice songs - Nadiya Ke Paar - to this be-happy-with-the-songs-alone category?

Bollyviewer: I think Ramanand sagar scarred an entire generation with those plastic-y earrings and mona lisa smiles! I remember being a vocal opponent of the Ramayan show, and my grandma telling me to be more respectful of reigeon- argh :) (not that any show can determine piousness, I dont think).
I personally like Nadiya Ke Paar- primarily because despite Sachin's urbane-ness and the skimpy story; the rest of the cast, dialogues and outfits are v genuine. Plus of course the songs. Do you hate it much?

I haven't seen Nadiya Ke Paar, I was just wondering... I generally like Sachin, and Sadhana Singh is nice too. But I am a bit wary of Rajshri fare. One can always rely on Rajshri films to be saccharine sweet, but sometimes they drive me nuts (like Hum Aapke Hain Kaun and Hum Saath Saath Hain)!

Bollyviewer: If you like Sachin, you may like it then! Sadhna is v good in it; that girl just never got her due. Its def a notch about HAHK. HSSH just makes me want to shoot myself :) cheers!

Well Ramanand Sagar definitely scarred me for Arun Govil. Everytime I see him open his mouth I expect him to pause and speak in that exxageratedly patient style of enunciation he had as Ram. Argh.

Also - "I haven't much appreciation for her acting skills; maybe this will change in the future."
In a word - No.

Amrita: I think Arun always had an aptitude for speaking slow! and wearing shaky pearl earrings :D eegh
Poor Zarina- she was around for quite a while, and one hopes she learnt SOME acting along the way- tsk.

One of my favorite and unforgettable,Nice collection and thoughts..