Never ever Jhoom to this..

Title: Jhoom Barabar Jhoom
Year: 2007
Cast: Abhishek Bachchan, Lara Dutta, Bobby Deol, Preity Zinta.
Lot of celebrity connections to this movie, which is why I set myself up before hand to take kindly to it. Shaad Ali (the director) is from Kanpur (my hometown), and was my cousin's (the Tandons) neighbor. Plus I worked with Aki Narula (the costume designer) as his assistant for 1.5 yrs (that was my pre-auditor life). I wanted to like the movie for their sake.
I couldn't manage that.
The plot entails a chance encounter of Preity and Abhishek, who are engaged to Bobby and Lara (respectively :D), while they are waiting for their fiances on a train station in London. They quibble, and then fall in love with each other instead. Turns out they were both fibbing about the fiances- both are in fact single and like each other, but are now comically stuck in their own lies. So now they do get Bobby and Lara to act like they are engaged to them- until eventually, Bobby and Lara decide they like each other instead. Which conveniently leaves Abhishek and Preity to 'fess up and the movie ends on that note. 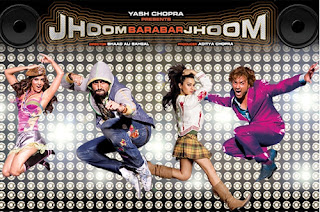 Honestly, the plot isnt bad at all. It may have worked very well. However, some things work against it:
1- The least of the problems: Preity looks shrewish, tired and middle-aged.
2- Even bigger problem: Abhishek is playing a character who is essentially a amalgamation of Bunty... and Bluffmaster, and that is honestly a bit old. All that does for me is remind me of the older, better movies, and rue this hash of a cinematic piece.
3- Biggest problem of all: the conversations between Preity and Abhishek are so long that they become tedious, to the extent that I was actually more entertained by Bobby (whom as a general rule I tend to dislike) because of his smaller, tighter scenes. Same goes for Lara, who was at least fresh-faced and nicely taken in small doses. The movie would have been really helped by some sharp editing- the US runs 138 minutes, and honestly, 110 minutes would work way better.
Also unavoidable: Amitabh, acting as the storyteller/sutradhaar. Aki, I completely understand that he is a street-musician in London- but the costume is simply a rainbow version of Steve Martin's apparel in 1979's The Jerk! 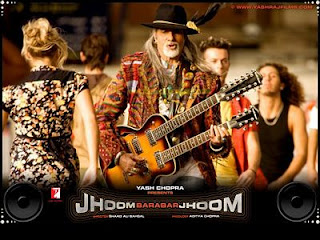 One nice bit: Abhishek and Bobby's nice little homage to Amitabh and Dharmendra's side-car montage from Sholay. (See Mr. Director? I do empathise with and understand all the bon mots and scenarios you have set up- thats all very well, but the movie still doesnt work!) 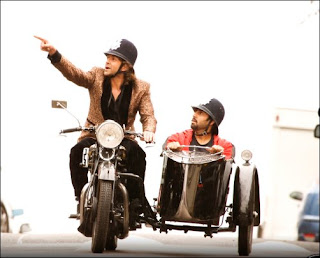 All in all, I wouldn't recommend this to you, unless you were watching this on DVD and could fast forward through all the dragged-out scenes. In fact, I couldn't muster the inclination to write about it for 2 weeks after having watched it. Avoid!
Posted by Shweta Mehrotra Gahlawat at 8:02 PM

Do you think that despite JBJ, the trend of musicals will pick up in Bollywood?

any just as a bit of trivia about Shaad Ali... you may recall the name of Rani Mukherkea in Saathiya was "Suhaani". i was told (the grapewine offcourse...) that there actually was a certain lady with that name, circa, when Shaad bhai was schooling in Kanpur!!

I honestly hope the "musical" trend doesnt catch on- Bollywood movies have enough music as it is. Memories of "Jhanak Jhanak Payal Baje" (1955) come to my mind and leave me in shudders; not that the movie was bad, but the endless songs were somewhat unbearable. As for "Jhoom," I didnt think the songs were memorable enough to leave enough of an impact to start a trend.

Mmm- didnt know about the "Suhani" angle- will forward the question to my cousin from Kanpur, who was actually his junior in school.

ah well.... let me know if this bit of trivia gets confirmed!!

I feel like such a gossip monger spreading loose talk (through multiple hearsays...) though I hope this does not besmirh any fair lady's reputation.