I really do not appreciate Emran Hashmi. And therefore it seems a little evil to be regaling you with not one, not two, but three movies starring him. However, not all 3 were as awful as expected, plus I want you to recognize this as a true act of love for Bollywood :D 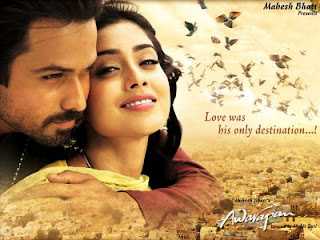 This is a really well shot movie- borrows heavily from Hong Kong-style gang movies, while shooting at some beautiful locales in Rajasthan as well.

Emran plays a small-time gangster from India, who left the country for Hong Kong when his girlfriend's dad killed her (rather than let her go on seeing Emran- honestly, I'd be tempted to do the same :D)

Emran blindly follows his boss's wishes in Hong Kong, until one day, the Boss gets a mistress. The girl wants to run away back to Pakistan with her lover, and Emran loses his life in helping them successfully escape.

Highlights:
1- Slick Camerawork.
2- The very beautiful Ms Saran.
3- Emran dies! I don't want to be mean, but the movie actually works, and I was wondering if his dying had some hand in that...:) 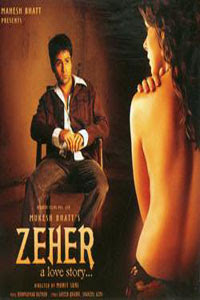 Emran is a police officer (hah), married to Shamita, also an officer (they seem to be working in the same offices- can a married couple do that legally??)

Emran and Shamita's marriage is on the rocks, and he begins an affair with Udita. Udita also happens to be married; to a abusive man who beats her up while she herself is slowly dying of cancer.

Emran steals some money from his offices to lend to Udita for her medical treatment. She dies soon after in a bomb blast, or so it appears.

Turns out Udita had been playing Emran all along; she and her husband were simply out to cheat Emran (how did THEY know he had access to any money? oh whatever). Shamita drops in to help Emran save the day, so that they can live happily (?) ever after.

Quibbles:
1- Why do all the women in all his movies consider Emran so hot that they have these urges to jump into bed with him????
2- Emran just looks sorry for himself all the time, when it is HE who is cheating his wife- seriously! And Shamita takes him back! With hardly a question or two!!! Yikes!
3- Udita is wasting her time. Seriously. She should become a model or seek an alternative career. 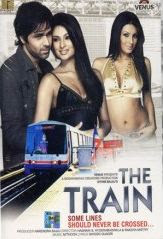 Title: The Train
Year: 2007
Cast: Emran Hashmi, and a bunch of other folks.

Emran is a married executive, living with his wife and daughter in Bangkok. A rocky marriage and a daughter requiring a kidney transplant have made Emran's life pretty tough.

Does that make him a serious man sticking to his job and making things work? Nope. He meets up a woman on the train (hence the title), and begins an affair. They check into a hotel room, where a man breaks in, raping the woman, and blackmailing Emran into the bargain. Emran decides to grab all the money he and his wife have saved for their daughter's treatment, and give it to the blackmailer.

Yes really! At this point I was truly aghast. Regardless- Emran wises up soon after to the fact that the woman was in cahoots w/ the blackmailer, and decides to get his money back.

And does he get the money back- of course! Not only that, the daughter gets well, the wife is forgiving, and all is good in the movie world again....

Quibbles:
1- This was truly a atrocity. Rape is treated as a plot device of the most vile kind.
2- Lots in common w/ Zeher- this "forgiving wife" syndrome seems to be following Emran in every movie.
3- The man steals the money meant for his kid's treatment! seriously! AAAgh! and then he gets back everything! wth!!!!

In conclusion:
Its done. I am glad. Also very tired now.
Posted by Shweta Mehrotra Gahlawat at 3:17 AM

Well, I thank you for throwing yourself in front of the bus as it were, and thus saving us the pain.

I have still not seen an EH film and maybe never will...

Thanks for your comments memsaab (your name is fab btw) and that's be the path I'd take if I had more sense- :D

Now I am going through a huge dose of Guru Dutt movies to get over this experience :)

I've seen Gangster, which may be among Emraan's finest - not that that is saying much. Isn't his kissing just the grossest? I admire you for wading through all three of these movies. I think I'd need brain bleach after watching more than one EH movie.

Aside; nice blog. I think I will link to you.

Sanni- "Brain bleach"- I love it- maybe I can try that :D - I honestly feel icky after watching "The Train." I usually fast forward through his kissing- ughh- wont have the gumption for ganster for a long long time now :D That said, the admiration is mutual- I will link you too.

Juile: Guess I'll have to make it this weekend then, get the pix and post! :D thanks for coming by!

Yes, seriously can't stand Emraan so applaud your guts for watching 3 films with him. In re. the last film - it's a copy of a Hollywood film which, I think, starred Jennifer Aniston.

Thank you for visiting! I've been reading up your Rainbow Days and Food and Laughter- such fun!

I've gone to a diet of good ol' 50s cinema since writing the last post- a kind of rejuventing excercise, if you will :D

I wikipediaed like mad, and found the Hollywood movie is "Derailed," with Clive owen playing the part Emran would replicate. Oh how atrocious....