Why did I watch Bollwood horror, which is usually terrible, terrible cinema?

Reasons:
1- Want a movie experience where you TRULY make no effort to think whatsoever?
Nothing like a Bollywood horror movie for campy, brainless, time-pass.
2- The last one in this set of three that I watched was particularly horrible- but the way I see it- if I don't document these movies, no one probably ever will bother- let no movie be left behind!
3- Last, but not the least, watching Bolly horror is a great way to mark time for Halloween :)
The Good 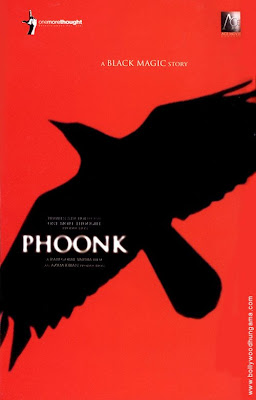 A uber rich builder lives happily in Mumbai with his wife, mother and 2 little kids- a daughter and son. He finds that his contractor friend and his wife Ashwini have been cheating him in business, and in a super OTT scene, throws them out of his business, life and home for good.

Turns out Ashwini and her husband practice black magic- and begin to make things happen that lead to the builder's daughter, Ahsaas, being possessed by a spirit. The builder is an atheist, but slowly begins to give up on modern medicine and calls in a soothsayer, Zakir, to intervene.

Pros:
1- Ahsaas is a very very good actor- really. She really kept the movie together- you may remember her as SRK's "son" in KANK.
2- Decent effects- you wont get really scared, but at least they get the atmosphere correct.
3- The supporting cast was definitely into it- the guy playing Ahsaas' dad was a bit OTT, but you could chalk it up to a parent's hysteria when they find their child beyond help.
Cons:
1- The songs should have been edited out- extremely ordinary, and did not add to the narrative.
2- A very precipitating climax, and uneven editing. It could have been stretched and maybe more stuff/scenes added to make it more exciting. On the other hand, a lot of other scenes seemed too long.
3- Unoriginal story. 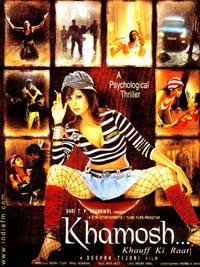 And one by one, they begin to die... who is the killer?

Pros:
1- The plot is far more intriguing than Phoonk.

Cons:
1- The movie loses out because it overdoes everything: EVERYONE overacts. The plot, instead of being treated in a straightforward fashion, has sub-stories tacked on to it until you just don't care any more.
2- The cast has terrible and boring dialogues, and no one quite knows what to do with them.
3- Pointless songs spring at you when least expected.
4- There is a second story with Juhi that supposedly forms the premise for the main action, but is executed really, really badly.
5- Highly unsatisfactory end- while your questions aren't really answered, you still breathe a sigh of relief- thank goodness it ended! 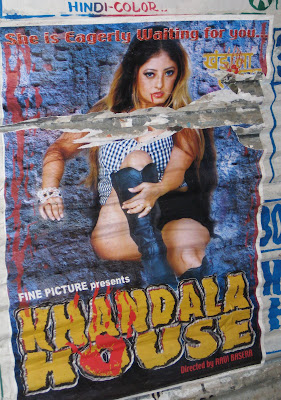 Title: Khandala House
Year: 2008
Cast: Anil Dhawan, Rita Bhaduri, Paintal, Nafeali Khan, Meghna Patel.
Yup, this is one from the Ramsay stables. Not listed by IMDB, this is basically a mix of soft porn and campy horror, best seen with your finger at the ready on your remote's fast forward button.
Nafeali is the daughter of a very rich man, and when her father falls ill, calls some local witchdoctor to cure him :S The dad is cured, but the witchdoctor seduces Nafeali, who becomes a witch herself, and decides to kill everyone she beds, to gain everlasting life (groan- yes I know- watching the movie was like having a bad toothache).
Respectable, old time actors like Anil, Rita and Paintal probably worked in this atrocity to make a quick buck, so they must be forgiven for their bad choices. Anil is Nafeali's uncle, who kills her to stop her murderous ways- but she comes back from the dead to kill him off, soon enough.
Rita Bhaduri and Paintal are part of the team of archaeologists who "discover" the coffin Nafeali was buried in, the first time she died. as soon as she comes back to life, they get killed off, and are saved from further humiliation.
And yes, there was a hero and a heroine- the archaeologist and the ancient rune reader from the digging team- they were very ugly, chubby and completely useless, but they survived in the end and lived happily ever after- :S
Pros: None- which may be a pro as well.

Cons: The whole thing.
How it could have been better:
The movie should never have been made :D

Posted by Shweta Mehrotra Gahlawat at 9:01 AM

LOL The Ugly! There's an episode of SpongeBob Squarepants where his friend Patrick says, "I caught... THE UGLY!" and that's all I could think of while reading your review. Maybe it was like a warning label for the film.

Thanks for the post, Shweta. I was getting real curious after #11 in this post. Maybe having Himesh Reshammiya star in them might make them scarier? :P

Ajnabi: SpongeBob rules! And so does Krusty Krab ;)

That was really brave of you. Kudos!

Ahahaha, I haven't seen either of these three. I did, however, watch '1920' along with Shiny & Baba on Shiny's recommendation and it seems far superior than what you've been seeing. There are plot holes the size of ponds though, but it might scare some people. I wasn't scared though, well, even 'The Exorcist' failed to scare me :P In fact, the only movie that has creeped me out till date was Urmila's "Kaun" aaah!

Anyway, go for '1920' if you're on a horror roll. There's a surprise item song in the middle that's probably the most horrifying sequence of the entire movie :P

LOL girl. You are so funny. I thought about making a horror Bolly blog soon too, lol. You beat me to it. I haven't heard of Phoonk yet. I'm interested since I love horror films. I agree on Khamosh. It was bad!!! Never heard of Khandala House and glad. :)

Isn't Phoonk RGV? For that reason alone I would boycott it...

But even B'wood horror films scare me. Yes, I am a total wimp. When I want camp I reach for the snake films.

Ajnabi: Yeah I felt like SpogeBob when I saw "Khandala" as well :) ggl. In retrospect, it was hilarious- just painfully so :)

BollywoodFan: Yeah I saw that too- but that was kind of dumb. The fan spent all that money- for what? RGV hadnt even offered an award- prob cos he KNEW it wasnt scary enough :) But maybe said fan was just happy in his fandom :)

Banno: Yeah- others call me foolhardy too :B hehe

Mimi: Yeah I have 1920 all ready to see next :) Kaun TERRIFIED me. it isnt funky-looking ghosts mah dear- its the unknown that is scariest. Cant see your photobucket link- blocked here- will go home and check out :)

Nicki: But the more the merrier! Since we ARE thinking on similar lines, let me know what you are planning to watch- maybe we can do a horror watch along?

Memsaab: Yup it is RGV indeed :) Bwood horror is usually anything but, yet I think "Kaun", which wasnt horror, is probably one of the scariest movies ever for me. I got terrified even when I watched it a 2nd time, on a tiny comp screen :)

You convinced me to give Phoonk a chance. I do love horror - even if it is RGV. I wouldn't call it "horror" exactly, but I did love Bhool Bhuliya.

The only thing I would be wary of are the films with plots "borrowed" from Asian horror movies - like that awful Oldboy remake with John Abraham and Sanjay Dutt. *shudder*

Filmi Girl: I loved Bhul Bhulaiya- I even liked Amisha in it :)

I dislike Oldboy AND the Bollyremake- I join yuou in the shuddering :) The plot for phoonk is more borrowed from the eternal "Exorcist" than anything else- also if you havent, see "Kaun"- no ghosts, but oh man.

I saw Phoonk, and liked it somewhat.The other two, i dunno...dimag khali karke dekhna padega. Good Indian horror is hard to find, I liked 'raat' with Revathy. 'Bhoot' was good too.

Wow! Not one but THREE!!! You are brave, or very very patient at least. :-) That poster of Khandala House is so campy.

And Kaun freaked me out no end too (at least the first time I watched it). You are so right, its not ghosts or other-worldly creatures but the unknown that is so scary.

TS: That's exactly right "liked it somewhat"- the movie isnt bad- but it isnt great, which I feel bad about cos that kid did good. To be honest, "Raat" ALWAYS scares me- and I never can completely understna dit- maybe because I've only seen the Hindi-dubbed version. Thanks for the reminder- I feel like seeing it again now :)

Bollyviewer: It was SO funny- everytime the ghostie appears, there is a chorus of "Khandala House", which is almost operatic in its values :)

that seems like one UGLY backwass movie, but pooorrr Ahsaas Channa I had no idea that she played SRK's son bechaari! I think Sanjay Gupta's new movie with Bipasha in it, is about that kid, or any bolly-kid who did gender-bender roles! maybe its about Daisy Irani! bechaari Bolly-child actors I feel all sad now!

Yeah I beleive it is to be titled "Pankh"- sounds v sad :/

And of course they are gloriously ugly and bakwaas :D