Thank goodness Halloween is almost here- I had more or less resolved to only cover related movies, and its becoming a bit hard. Most of these movies are hilarious, but pretty brain dead and I feel exhausted after watching one! 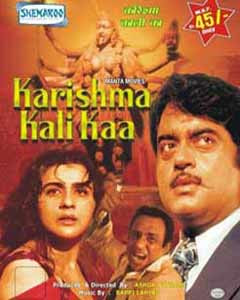 Amrita is a poor village girl, who regularly helps out at the local Kali temple. One night, she is handling the goddess' jewellery when four men (including Raza Murad and Ranjeet, those sad sods) rob the temple, rape her and kill the priest.

To add insult to injury, Amrita is blamed for the murder and robbery, and is thrown in jail. She escapes, and earns heavenly powers (yes, really!!!) via worship and even manages to fall in love with Shatrughan, a police inspector. Things happen (as they will), and Shtrughan throws her back in jail for her supposed crimes- what will she do now???

What happens next is a visitation by Kali herself to the damsel in distress- Amrita is granted heavenly weaponry (including a chakra, sword and other miscellanea) and also the power to disappear in and out of her jail cell (just like Star Trek!). Needless to say, all she needs to do now is kill off the bad guys. In the end, Kali herself appears to the general populace after some major sacrificial dancing by Amrita, to provide a character certificate of Amrita's goodness- so that Shatrughan may marry her :S

Notes:
The movie transcends all lesser concerns like pros/cons- it cannot be improved- it just is. Technically, it is a religious movie, and does not truly fall into the allowable Halloween-friendly genres, but the utterly hilariously unbelievable plot, and the insane ending make it qualify. I may sound blasphemous to some, but you truly have to see this movie to believe it- I watched spell-bound, unable to take my eyes off the screen- there are other mad Bollywood movies out there, but this was the strangest faux-mythological-religious movie I have ever dared watch.
______________________________________________ 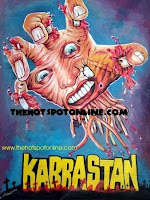 Kabristan was one of the movies made by these pretenders- the plot is drivel: A man and woman have an affair- they are married- but to other people! When the woman's husband turns up ad theaters to get violent, the man and woman kill and bury him.

Of course the dead man comes back- ready to kill not only his wife and her lover, but also the lover's extended family :) 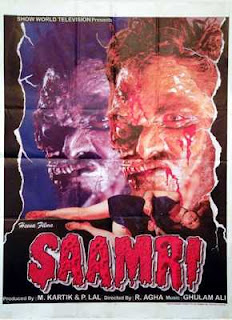 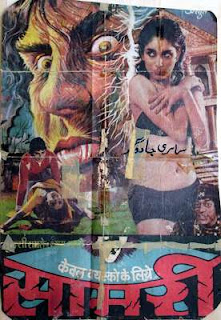 After the surprisingly well-received Purana Mandir the Ramsay Brothers made a sequel, throwing in all the insanity of the original, with trademark Ramsay campy, soft-porn style.

Samri is a Satan-worshipper in a small town- as the local rich man, no one can oppose him till one day when he realizes that old age is finally catching up with him.

He decides to invite his family back home- including his niece Anju (Arti), her boy friend (Rajan Sippy), his step-brother Prem Chopra, his girl friend and his friend. When the others realise that Samri is leaving his entire estate to Anju, they kill Samri and plot to grab his wealth for themselves. But he comes back.....

Notes:
Rajan Sippy did plenty of C-grade movies, and even tried his hand at production, but failed miserably. Thankfully for him, he cut his losses after about a decade of floundering, moved to the UAE and established a successful restaurant, "The Moghul Room" in Cairo, Egypt, where he later employed Kalpana Iyer (who played "Niki"- Sam's girlfriend and David (Om Puri)'s daughter in Disco Dancer).

You've certainly been on a marathon horror-watch! Must be really, really tiring - I can usually endure them for only about 10 min and thats when I'm being patient! Love the movie posters though, especially the Kabrastan ones with the hand-with-a-face thing.

you are kidding me about that Kali Maa movie....OMG, how cheesy!
I remember watching Kabrastan in India, that was quite scary back then. You have some patience, I tell you that! I would have had to be hammered silly to watch that Kali Maa chronicles till the end.

but on another note: Happy Diwali!

OMG, this is too funny! I've never heard about some of the movies. Bollywood came out with THAT many horror films? Hehehehe. Gosh, I haven't even gone through my list at all!! Oh well. Too much on my mind this month.

Bollyviewer: Yeah I think I am done with Bolly horror for about 6 months at least. Especially for these low-budget clunkers- it is emotionally exhausting to see grown ppl being this silly :)

TS: I was SO shocked myself re: Kaali- I totally did not expect Shatrughan and Amrita (though they have done some awful stuff) to be participating in this :D I was way too surprised to drag my eyes off the screen (hows that for a scary image :D) Happy DIwali to you too!

Nicki: I think Bollywood comes out with at least 1 horror movie a month, if not more- just by looking at the numbers. Of course, most of these movies are really soft-porn in the guise of horror, and go straight to video/VCD :)

Forget the movies--I am now scarred for life by those POSTERS! LOL That's quite enough scare for me, thankyouverymuch.

ROFL- that is so true- those are such mad posters- love 'em :D