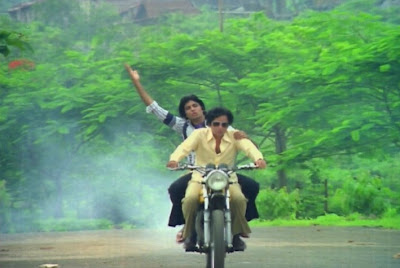 I cannot think of Shashi's career without Amitabh, or vice-versa, since their careers have crossed via so many beloved movies. And while I adore Shashi, my feelings about Amitabh are ambivalent- a fine actor no doubt, but probably because I am a product of a later generation, I do not fathom his demi-God status in Bollywood. Shashi, and for that matter several others, are just as fine actors, no? And if both men have acted in so many movies together, why God status for one and not the other? To gain an understanding, I decided to look a little deeper at their careers.

Shashi supposedly had a greater advantage to begin with: he started in movies as the scion of a movie dynasty: the Kapoors; at age 4 in Meena, 1944, and then continued with both cinema and theatre into perpetuity (pretty much). Amitabh's break into the entertainment world came with his parents' move to Delhi in 1955, when his mother became an important part of the theatre scene, and he was drawn into the troupe, presenting before the Nehrus and Mrs. Indira Gandhi. The latter fact initiated his friendship with the Gandhi brothers: Rajiv and Sanjay, and so his entertainment and political seeds were sown.

And there the Shashitabh roads diverged from running parallel to diametrically opposite, for a while: While Shashi grew under the theater and cinema mantle, Amitabh wanted to be an engineer- until my dear father-in-law tutored him in math in Karorimal College, which didn't work out after all, after which he moved on to sell insurance in Calcutta. And there he was to remain until his brother Ajitabh, the business brains of the family, brought along a movie camera from his foreign travels, reminded him of his aptitude towards acting, and helped create a little movie short, exhibiting Amitabh's talents.

It must have been a good short, since it brought Amitabh back into a parallel life with Shashi, with Saat Hindustani, 1969, when Shashi was already 38 movies strong, had broken into Indo-Western movies and had met Jennifer. After that, it was a mere six more years till Deewaar, 1975 brought them together for a partnership that would go on to go down in Bollywood history as probably one of the best collaborations ever. While Shashi's transition from the 60s to the 70s had been pretty smooth, he was fast becoming part of the multi-hero movie phenomenon that started in the 70s- pure Masala, with a capital M.
Amitabh fared better with the masala-fare- he certainly would get the lion's share of screen time: cases in point: Trishul, 1978, Kala Patthar, 1979, Shaan, 1980, Naseeb 1981. The one movie that perhaps irked me the most for this reason was Kabhie Kabhie, 1976, considered as one of Amitabh's better movies. This is the one movie that seeded my incomprehension of the demi-God phenomenon. He certainly had tons of screentime, but most of it was spend being poetic or sullen, in turns-I couldn't see the artistry in that- while Shashi, so I felt, took his second/third lead style role and converted it into something stellar. The one scene where he realises that Rakhi, who played his wife, had an affair before they married is so perfect: he goes from surprise - to despair - to understanding and being at peace with the past- for me, he owned the entire movie with that one perfect scene.
Let it not be thought that I think less of Amitabh as an actor: Zanjeer,1973 and Don, 1978 are strong evidences of his star quality during that time. He rode into the 1980s on the insanely fabulous Mahaan, 1983, and Coolie, 1983, and survived that terrible decade despite of Toofan,1989 and Jadugar,1989.
But somewhere in there, their path's diverged- Shashi got through the 70s with the fabulous Junoon, 1978 and miscellaneous Masala. Moved into the 80s with more Masala, including Namak Halal, 1982 with Amitabh, which again portrayed him more as a second lead than anything else. But then, he had bigger and better fish to fry in the 80s: In Silsila, 1982, which was pure Amitabh, he was stellar in the cameo he did. He was fabulous in Kalyug 1981 (despite a huge star cast), Heat and Dust, 1983 and New Delhi Times, 1986. The 80s, so unkind to everyone else, saw him experimenting with production and intersting cameos: my favorite cameo from Bollywood remains his one scene in Ijazat, 1987 with the 2 words he speaks, "Oh. Mahendra"- which words are the sum total of his understanding of his wife's (Rekha) previous marriage, her relationship with her ex-husband and his own levels of comfort with it.
And then of course came the contemptible 90s-where Amitabh suffered terribly until reinventing himself with Suryavansham, 1999, and moving on to do over 50 movies (arguably the best acting he has done in his career) in the 2000s, all as an older man, without the misuse of hair-dye. Shashi, since the 90s has done comparitively lesser work, and even lesser work of note, except In Custody,1994 and perhaps Side Streets, 1998, his last to date.
So it appears that on-screen longevity definitely lends to demi-God-ness. But I remain largely unconvinced that despite his legend, Amitabh's superlative acting skills are greater than Shashi's, or his other counterparts. Perhaps this belief comes from being a firm Shashi fan, or perhaps it is simply because I need to see more of their movies to convince me otherwise.
Posted by Shweta Mehrotra Gahlawat at 9:41 AM

if i had to choose between the two men,then shashi it would be as I sat on his lap, and feel connected to him now!Though my mum and family would choose amitabh as he hugged and kissed my mum when she was 17 and stood outside his house! But they made the best team ever, but i do agree with that scene in kabhi kabhie. THat was world-class acting, i think shashi fared soooo much better in the 80's and didn't turn into a backwass movie machine! Though no disrespect to amitabh who i wish was my emo boyfriend, and shashi as my chirpy second dream boyfriend, shammi being my persistent first!

I've always assumed that whereas Amitabh struck a chord with proletarian ideals and the Angry Young Man persona, Shashi was always loved as a more detached, bourgeoise "kind prince" star. That is, you could never really imagine Shashi being "one of the guys" or, at least, "one of the workers" - he was far too upper class-seeming.

Same with SRK striking the NRI chord in the 1990s, Amitabh - a charismatic performer more than a technically gifted actor - was just in the right time and place. I'm afraid Shashi was always stuck in the Prince Charming mode... great for us ladies, of course. :)

I think it may also have to do with what they wanted out of their lives. While Amitabh was clearly ambitious and focussed on being the lead hero, Shashi did a lot of work to keep Prithvi going, and then his production company.

You must watch the Boogie-Woogie clip with Amitabh and Shashi's doubles on Beth loves Bollywood's blog.

PPCC has put it very well - Shashi was too refined-looking to make a convincing aam aadmi. In their movies together, I think AB comes over as the better actor. He didnt have Shashi's tendency to ham in masala-flicks but the latter did very good jobs in some great (and meaningful) movies - the kind AB's never done.

"I do not fathom his demi-God status in Bollywood" - me neither! But for that I think I can blame Doordarshan which telecast only his worst movies during my childhood - most of his blockbusters made it on TV only after cable came to India. DD did however, show a great many of Shashi's interesting films and I grew-up liking him better!

PPCC: That does make sense- though I think Shashi had sufficient "poor young man" roles, he really never had- in fact NO ONE ever had enough roles as Amitabh's "Angry young man." :)

Banno: Lol- I did see Beth's- maybe I was having a similar brain waves at the time :) those folks were amazing- but also eerie :D That's a good point about the Shashi- I think he did far more meaning fulf stuff, esp during the 80s.

Bollyviewer: I see shades of Amitabh's greatness in his work of course- but I guess we needed to have been adults in 70's India to understand his impact on moviegoers- TV/DVDs, as you say, perhaps do not translate enough. Shashi did have a greater spectrum in his roles I believe.

Bollyfan:
lols about poor RK- have you heard and been shocked by his latest movie coming out? :O
alas- I have understood Amitabh's charisma- but not always. Its palpable in Don and perhaps its the charisma which helped him survive Toofan; but Shashi had buckets of it too! I def agree w/ PPCC- guess its the "working class hero" bit from the 70s that made him a legend.

I simply don't see Shashi's adorable qualities. Nothing in him -apart from his eyelashes- appeal to me. He is not a bad actor but I think only an average talent (to be fair I have not seen many Shashi films).

PPCC has a point but I think it is possible for a good actor to exceed his image and in fact I respect them more if they choose to.

Amitabh to me above all else put more "dil" into his performances. He is one of those actors whose eyes can speak and he made good use of it by restricting his physical movements when it is ok to do so.
Shashi on the other hand, feels like he is phoning his performance in, getting his paychek and moves on (ok before any of you say anythingI'm aware that this is probably not the truth but I feel like that when I watch him perform)

Also I think that Amitabh has more screen presence so when they are together on screen one tends to focus on Amitabh.

Having said all that, I too am puzzled by the whole devotion thing. He is a great performer and judging from his blog a well learned and a humble man but I guess some people are meant to be adored by many. There is no explanation to why them and not others other than God's will I suppose.

nd don't knock SRK. I think he is Shashi and Amitabh merged into one :)

Thanks for coming by Eliza- I hope you visit often!

My Shashi-love is hurt- sobsob :D

Oh I already do visit often (just never commented before) I like your site and your reviews :)

Sorry about Shashi love but he is getting so much love from every blog I frequent, it probably already healed! :)

Thanks for the post! I love learning about the different phases and actors in Bollywood, although I've seen very little from both Amitabh and Shashi in this time frame...

Plan to watch many more, though...althougth I can't give a fair review of the two in comparision, I already know from the few Amitabh movies I have seen that I have yet to feel that "Connection" with him. Its like, he's tall, dark, handsome, has charisma and talent, but just doesn't give me that warm fuzzy feeling. Who knows, maybe that will change once I see some more of this work. No doubt he has earned a tremendous amount of respect for a reason. I'm just not completely there yet.