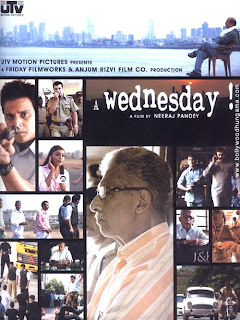 This is definitely a movie at the right time- though it is debatable whether it provides any true answers, or serves more as a mirror of the issues faced by the common man in these times.

Mumbai has a long history of violence- secular, gang-related and the theme of this movie- terrorism -related. And Naseer himself has acted in several movies reflecting terrorism, varying from the crudely jingoistic (Tahelka, 1992) to the commercially spectacular (Sarfarosh, 1999).

In today's Bombay, more has changed than its name- while the gang violence has ebbed somewhat, bomb blasts are the bane of eveyrman's existence- not frequent, but deadly enough to make the administration lose its sleep.

In such an enviornment, it is not unusual that an anonymous everyman (Naseer), would lose his cool sometime- and the results of that would be explosive. While the chief of police, Anupam, has to manipulate politicos to get free reign to do plea bargaining with terrorists, terrorists themselves have greater freedom via access to technology. His team, headed by Aamir and Jimmy take the lead in tracing the source of the blackmailing terrorist- but will they be in time?

So what happens then? The movie pulls enough punches to give you plenty of surprises and yet a surprisingly satisfying conclusion. Yet, the movie is deeply disturbing- what if the common man does indeed take the law in his hands? This would hardly render greater security to the general populace- can we afford creation of a renegade sect, turning to violence out of frustration? In this, the movie is reminiscent of "Rang De Basanti," which also showed an eruption- but lacked for real answers.

The movie also exhibits hows "easy access" terrorism has become, with the widespread use of the Internet- how do we deal with educated terrorism? Each one of us has the tools to turn to violence- how do we defer to our better natures, and turn away from school yard behavior of "a slap for a slap"?

Posted by Shweta Mehrotra Gahlawat at 8:54 AM

Nasseer and Anupam Kher were the best part of the movie (thought Jimmy Shergill's *tough* cop was too exaggerated to be interesting) but they only served to highlight the contrast with the end which totally ruined the movie for me. Could have forgiven the film if it had only made Nasseer's character pay for his crimes. Its so wrong to condone in the aam aadmi what you'd hang a terrorist for!

Bollyfan: I know! that command center looked like a high-tech lab from a private school. You know, I had thesame feeling about the rooftop, and finally realised it was only for effect when the movie ended :S- disappointig that.
The only way they pulled off that climax was because Naseer was playing the man- the audience CAN forgive Naseer getting away with anything :)- and the makers took advantage- though the message it brings across is just downright scary.

Bollyviewer: Those two are so adorable together- I wish they would make more movies as a team! And well Jimmy is really just so cute- someone give him a good role already :)
See, like I said to Bollyviewer above- they only got away w/ it cos it was Naseer- he is like Morgan Freeman of Bollywood I think- his characters can appear absolutely in the right even while making little sense :)

I have yet to see this...I've always liked Naseerudin Shah....he's still got it!

I was curious about this one! Thanks for the write-up. I'll probably get see it on DVD eventually... I'm really looking forward to Naseeruddin's next. :)

TS & Filmi Girl: Nasser's the man! But watch this with a pinch of salt- the violent slant can be disquieting- see Bollyviewer and Bollyfan's takes on this too.