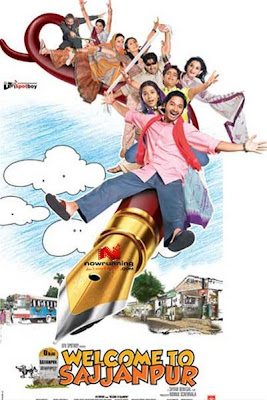 I've always loved Shayam Benegal: I've seen so much of his work and cried so copiously through it all, that I am rather wary of it- so much pain and angst always! From Charandas Chor to Nishant to Suraj Ka Satwan Ghoda (oh that last one was especially sob-worthy :)), Mr. Benegal is a brilliant director great at angst-ridden, socially education cinema.

So I was pleasantly surprised that while I did shed tears during Welcome to Sajjanpur, some of those tears were also attributable to laughter- its as if he has adopted some qualities of the Hrishikesh Mukherjee brand of cinema, and made it his own. This is a really clever movie- an essential part of my top 10 this year.

The action takes place in a Northern Indian village, where Shreyas lives- despite his Bachelor's degree, like so many of the Indian youth, he hasn't been able to secure a decent job, so he comes back to his village to write his novel. However, his writing skills soon make him the village's letter writer of choise, to the extent that he opens shop in the village marketplace and charges nominal sums to write everything from love letters to petitions to the police chief, as requested.

So many people need his help- the local goon wants his wife to be the elected leader of the village, and therefore petitions the chief of police to arrest the honest transvestite who is standing in the elections. The transvestite in turn petitions for police protection from the goon who may resort to murder to stop him from running. Which letter will work better?

Then there is Ravi Kishen, a low-caste who is in love with a young widow, Rajeshwari- Shreyas writes voluminous love letters, which win the heart of both the widow and her father-in-law- but will the wedding really happen?

Then there is Amrita, whose husband Kunal hasn't returned from Bombay, where he went to work, in years- but will Shreyas be able to write her pleas to him to return- since he is falling in love with her himself?

There is also Ila- whose daughter Divya is unlucky, and no suitable boy can be found for her. What will Divya's fate be- spinsterhood or marriage to a puppy (yes, really!) to remove the evil eye upon her?

In all of this of course is also Shreyas' novel, which must come to fruit inspite of all his distractions and the events unfolding around him.

Posted by Shweta Mehrotra Gahlawat at 11:32 AM

Charandas Chor was Benegal's movie? Never knew that! He does make the most interesting movies and strangely enough, never seems confined to specific genres. I loved this one a lot - it was so lighthearted and yet there was serious satire in there as well. And Shreyas totally rocks! :-)

Hey, I missed this film on screen. Did you watch it on DVD? If available, I'll see it. I think Shreyas is better than Amol in many ways, he's more charming.

Bollyviewer: yay for another Charandas fan :D it was so insanely surrealy amazing, nahin? I am hoping hard that Mr. Benegal keeps making more of such cinema.

Banno: (insert misc hemming and hawing noises)- lets just say I got a copy from outside the straight and narrow path - the DVD comes out soon I beleive :B
And a big Nahinnnn for the Shreyas > Amol- maybe once Shreyas' body of work is comparable :)

I can't wait to see this :-) And now even more than before! I like the music from it too...

As an aside for Divya Dutta, I read somewhere that the "pandit" performing the ceremony in film actually started reciting the "real" mantras for marriage. :D

Memsaab: Its a gr8 watch- I hant heard the music before seeing it, and while watching, it just kind of blended into the narrative- which is the best thing :)

Amey: Thank you for commenting Amey- please stop by often! Yes I heard that happened, and Divya apparently grew suspicious and intervened in time :)

I was wondering, just how many actors are out there who don't know their filmy marriages were for real? They should be wary of acting in Barjatya projects now ;)

Lol. but seriously, I think this bears researching- the Barjatyas are probably old hats at fake marriages, so I doubt they mess up- I wonder how we can find out?

I'm really looking forward to this.

And someone cast me in one of them scenes (with that same pandit) opposite Tabu! ;)

If that wedding happens, I am totally dancing in the baraat :D