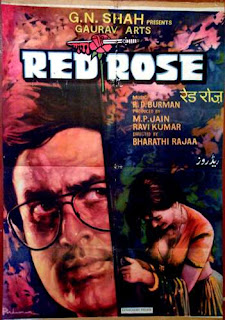 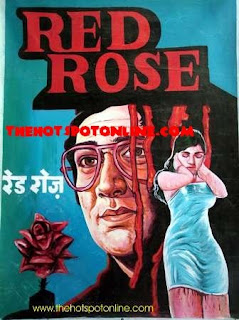 Hearing about this from both Nikki and Trupti, I was intrigued: A scary movie with Rajesh??? This was the first time ever I was motivated to see a RK movie.
So I saw it.
Was I satisfied? No.
Am I glad I watched it? Yes.
Why? Because no movie shall be left behind, here in Apni East India Company. I shall document and nurture this little monster that I bet even its director must not love.

Rajesh is a rich man in Bombay, and a tad debauched (how do we know that? He sleeps apparently naked, with a bra in his bed- eugh- the movie has barely started and I am already not digging the implied sleaze). 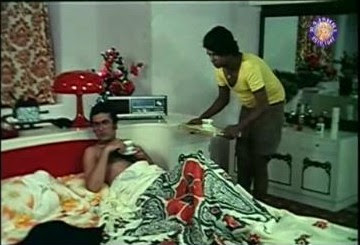 He disapproves of the modern, flirtacious woman, but dates them anyway... 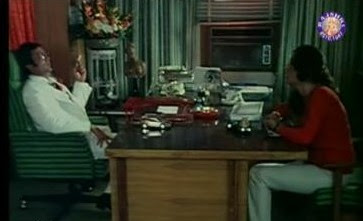 He has some really odd servants, including Om Shivpuri, the gardener, who gives him a red rose every day as RK leaves for work. 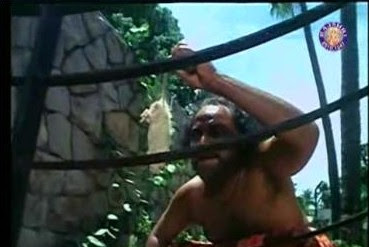 He has a butler/cook type servant who seems to spend too much time watching his master bathe (!!!) 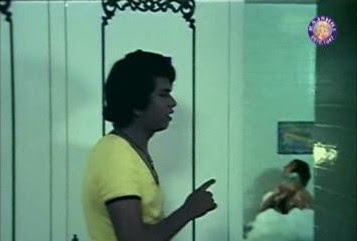 He has a dad, Satyen, who lives in seclusion in the out-house.

Then one day, Rajesh meets shy, virginal Poonam, (she works in a store called Fabina, which I found actually still exists for reals, in Mulund, Bombay). 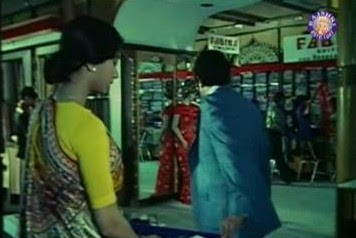 ... and after much courting, 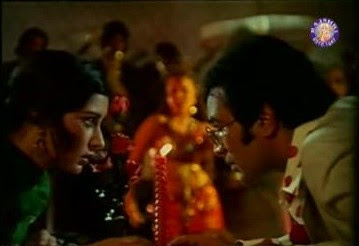 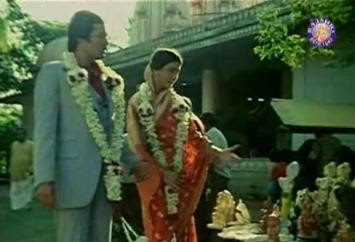 But Rajesh has secrets Poonam doesn't know of- and since she now lives with him, the skeletons in his closet literally begin to fly out- is she prepared to face her husband's secrets?
(and yes, those are bras and a v fake skeleton :D) Pros:
1- The fact that Rajesh took the decision to star in this movie is applaud-able- he had never attempted something like this. Plus the Director, Bharathi Raja, was popular in Southern Cinema but relatively unknown in the North, and even though Rajesh's own star was falling, it was a huge risk for him to take.
2- Super campy glee- give up and enjoy the madness while you check out RK's leather newsboy cap and Aruna's really cool peasant dress (I want it!)

Cons:
1- A horrible screenplay, shoddy direction and horrible pacing and editing- maybe because the crew wasn't familiar in the language it was working in? There were enough holes in the screenplay for a ship to sink into- so I wont elaborate.
2- I cannot fathom the music- its the worst stuff RD Burman- whom I love- has ever done. Maybe he was distracted, since he married Asha Bhosle that same year.

How it could be better:
And yes, this movie could have been so much better than it turned out to be, if only the dialogues, screenplay and direction had been handled better. One cant really blame the actors if they weren't given appropriate tools to work with. They had a good story, good actors and a good musician- yet dropped the ball.

All in all, don't watch, unless you must see (as I did) the one time Rajesh went truly against his grain.
Posted by Shweta Mehrotra Gahlawat at 12:00 AM

It's a remake of the Tamil film, Sivappu Rojakkal, starring Sridevi and Kamal Hassan. Haven't watched Red Rose, but my extreme love for the Sridevi-Kamal pairing makes me say, "The original is better!" :)

LOL! You know as we get older, we find more flaws in films than we did when we were younger. I have to re-watch this! The last time I've seen this was when I was 13 or maybe younger? So that was so many years ago since I'm 32 now. Red Rose was actually the first horror Bolly flick that I've seen. Yes, you are right about Rajesh, just worth watching for him, so unlike him to do something like this. Gotta love it.

lapetitediva: I am certain the original would be better- it makes sense that much of the movie was lost in translation. Plus, Sri would totally rock it- I worship that woman- :)

Nikki: I totally get that- I LOVE "The Evil Dead" series, for the same reason- its our childhood impressions :) Also, based on lapetitediva's comment above, I am guessing the Tamil version was probably a big hit, which makes Rajesh's motivation to do this more clear- I think by 1980, he was definitely looking for a decent hit, and therefore must have braved through this.

Heh, Rajesh-apologizer memsaab here, but do you think he didn't take risks earlier too? One of the things I really like about his whole career is that even early on he did roles that weren't typically "hero-like" and had shades of gray...Ittefaq and Aavishkar come immediately to mind, although I know there are others too.

I have this one in my to-watch pile, will adjust expectations appropriately :)

Some of the scenes, like the woman bathing in flower petals and the falling rose petals really reminds me of American Beauty.

I came across this years ago on Zee Cinema (late at night) and was so creeped out by the first few minutes that I never watched. Glad to know it wasnt all that worth watching! If I have to endure RK I'd rather watch his romantic comedies which were quite fun.

Memsaab: Yup, I am contantly trying to like RK :D I havent even heard of those 2 movies- mostly I hear "Rajesh" and run away from that movie asap- am therefore googling these feverishly right now. And if you do watch this one- seriously lower ur expectations :P

Anonymous: I dont recall that scene- I must have fallen comatose in between all that insanity :D

Bollyviewer: Ohh for some Zee Cinema- I always try to catch some late night from these when I go bk- they put real fabulous campy stuff at late night! I watched this in the hopes it'd be a good thriller- the cast definitely promised that- but- [sigh]

Aavishkar is more of a social drama, about a couple's marriage splitting up (Rajesh and Sharmila play the couple). Well done too, but a bit depressing at times.

I guess one of the benefits of being a "newbie" and not Indian is that you don't enter with memories and/or prejudices from earlier times...I really only run screaming from Raj Kapoor. Recently I've been watching quite a few Jeetendra movies (another poor guy who gets vilified a lot) and some of them are really fun.

So you DID watch it...! yeah, this was a bit on the 'iffy' side...I don't know why/how Poonam agreed to do this movie..she's beautiful in this though. I watched a total crap arse "veerana" on youtube. OMG.

Here's a November 2007 review of Red Rose from The Economic Times in India. Quite a different take from yours :-)

Memsaab: Ittefaq I now definitely want to see- Avishkaar scares me a bit :B That is very true about Jeetendra- I saw his "Mere Huzoor" recently and was properly aghast- talk about vilification :)

TS: It seems from comments here that the original Tamil version of red rose was a huge hit- so maybe that's y she agreed. I adore Veerana and the whole Ramsay crap movie phenomenon- always good for a laugh :D

Anonymous: Thank you thank you for the link! It was great reading the review, and I laughed delightedly at the sheer disparity in my opinion from it :D But I do agree w/ the reviewer there about Rajesh- he was v good at his role- I disagree about the quality of the movie- sucked :)

Bwahahahahahah! I can't stop laughing about the skeleton in the closet!

And that's my very deep observation to add to your comment section. ;-)

Rum & Ajnabi: Yep, I had to go back and re-view that particular scene- my screen cap isnt very good, but if it was clearer you would have seen that the human skeleton's head was roughly the size and shape of a cow's head, and obviously made of paper mache- so no humans or cows were killed :D

Rum: Normally I dont like Rajesh's mushy movies, but he bought SUCH an element of sleaze to this one- I cant help but feel he did a decent job portraying his character (which almost sounds like a back handed compliment, I know) :)