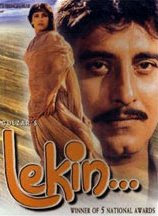 In between the real and the unreal lies the ethereal, and there are few Bollywood movies that talk about that in-between place without making a horror movie- Lekin (trans: "But") is a rare gem.

Vinod is Samir, a government inspector sent to Rajasthan to evaluate a princely estate. As he embarks upon his journey, he meets a mysterious woman (Dimple) in the train, whom he later finds is called Rewa. He is intrigued by her and puzzled by the enigma that she is, but she disappears before dawn.

Have you ever seen such beautiful opening credits?

Samir begins his work in Rajasthan, and begins to meet Rewa more and more often, though he has no idea who she really is.

At the same time, he begins to hallucinate visions of bygone eras- of a cruel king, a group of folk singers, of desert storms- is he losing his mind? or is he really time travelling? or is someone making him aware of crimes of the past, and for what purpose? His friend Shafi (Amjad Khan! who totally rocks it!) and his wife Sharda (Beena) are afraid for his sanity. With Dimple looking so amazing, can you blame the poor man?

The movie proceeds to its conclusion with so many foreshadowings and half-hints, that like Samir, the viewer is also completely befuddled- who the heck is Rewa and why is she so mysterious?? Will Samir ever know the truth- and whose beautiful voice calls him to the desert- who has been lost in the desert's storms for such a long time, and has not yet reached home?

Notes:
1- Vinod was back from the break he had taken in the mid80s, and was looking suitably gorgeous. The desert scenery complemented him beautifully.
2- Dimple rocks Rajasthani outfits, and she knows it (dont believe me? Check out Rudaali (1993))- she acts with her eyes here- and they speak volumes- often during the movie, I honestly didn't need her to speak at all- her expressions convey everything, which is what the movie needed.
3- The real star: the songs, the music, the lyrics, the singers- I've worn out 3 (yes, 3!) copies of the soundtrack since my teens, and have the majority of it committed to memory. Gulzar and Lata appropriately received the national award- each song is a beautiful gift from the duo and Hridaynath Mangeshkar. I am usually not a Suresh Wadekar fan, but he moves me to tears with the "Surmayi" song.
4- I wish there was a national award for "best locales"- because the Rajasthan featured here deserves it- the sand dunes, the colors, the sand, the unrelenting yet accepting desert- it is truly a visual feast, cliched though the term may be.

Final thoughts:
I love this movie- there is a lot of solace to be found in it. The yearning, the loneliness, the poetry of the desert all reach out to the viewer; and in the end, the real lovers are the music and the desert- both more enduring than their human counterparts.

This sounds great! I do love Vinod Khanna... I'll have to see if I can find this. :)

I love Rajasthan locations. I am wary of the music only because Lata should have stopped singing way before this was made, but will check it out!

Filmi girl: he was adorable here- so confused and messed up and brawny :D

Memsaab: I will risk blasphemy by calling this Lata's last hurrah- I am sure she sang good stuff after this, but here she and Hriday get together to weave classical music into Bollywood- I am sure u will like :)

I tried watching this years ago - mostly because of the songs and visuals, but got put off by the slow pace. Have to try again, now that I am better able to take slow-paced movies! They both look so gorgeous, and if I recall correctly, Hema Malini does a great guest appearance, as well.

Okay, all drooling aside, this movie looks really good. I wonder if Netflix has it?

Bollyviewer: I liked it- so oddly mystical somehow. And yes, ur memory holds true- Hema was very good in her cameo.

Lekin is one of the best hindi movies made - story, acting, music, locales, costumes et all.

I really like the song Yaara sili sili. I too have exhausted my tapes/CDs constantly playing lekin songs - so u have company on that score!

VK/Dimple were really good so was Hema in her cameo.

I saw this as a child and was scared stiff by Dimple's portayal as a ghost (bear in mind, I had seen Dimple do the ghost thing with Mithun in the Bees Saal Baad):)That and Hema Malini's radiant cameo are the only two things that I remember most clearly about it. However, loved the soundtrack and think it is definitely time to revisit the film itself. Being from Rajasthan, I am partial to all films that use the place as a character in its own right than simply a pretty postcard background:) btw the shot of the dunes in the opening credits reminded me of Lamhe, another all-time favorite and an early 90s gem!

Anonymous: I had no clue Suresh W had sung those! you are right, he is truly brilliant then- I preferred his version of those songs to the female versions anyday. (btw- "Tujhse Naraz" is from Masoom, not "Mausam,"- though the latter had brillitant songs too!)

Priyanka- ohh I remember bees Saal Baad- yikes- that did scare me- or maybe I was too young at that time.. She doesnt scare me in Lekin though- just makes me sad for her :) Lamhe was amazing- and reminds me how much I miss seeing Sri in movies- she needs to come back, now that she is prettier than ever!

Yeah, I just finished rewatching Lamhe like for the umpteenth time a few days ago - one of my few Anil Kapoor favorites. btw speaking of Vinod Khanna, I read somewhere that he was also considered for Anil Kapoor's Lamhe role! which would have made for interesting viewing...

forgot to mention that just discovered your blog and enjoying reading the entries, esp in reference to glorious 80s;)

sorry i meant to say "masoom" not "mausam" as you rightly pointed out. I have seen both movies.

I am also visiting your blog for the first time and find it interesting.

VK is very good in "Kudraat" too although Rajesh Khanna and Hemamalini are the lead pair.

Priyanka- thank u for the compliment- u must come by often! I cant imagine VK having done Anil's role- It would have been tough for him to do the younger version in the beginning of the movie- thank goodness for the casting director's good sense :)

Anonymous: np- I jumped at it, since I've cried often enough while seeing masoom :D I love Kudrat- the entire cast was gr8 in it! Thank you for ur kind words- please do stop by again!

As a kid, i was mesmerized by the movie. The look. And the song, Yara Sili Sili.

Though at that time, i was not able to understand the movie. So there, you reminded me, that i should watch is ASAP.

Rajasthan is always Gorgeous. Still I have to visit the dunes. I have seen only hills of Rajsthan.

Why haven't I watched this film yet??? Thanks so much for reviewing it. Looks awesome.

I must have seen this movie about 20 times...and I still never get tired of it, and I cry each time!
Dimple is hauntingly beautiful ( no pun intended) and Vinod Khanna looked his absolute best! A winner all the way!

Darshit: I guess all of us who grw up in the 80s-90s were enchanted by the songs- ethereal's the word! Dimple has aged truly gracefully- I wish she, Shabana and Dipti Naval would make more movies.

Nikki: Seriously? its a bit like hans christian anderson, only Indian, and sad.

I really enjoyed this movie! Sadly my DVD lacks song subtitles so I am left feeling like I'm not getting all of the movie.

I can't really classify it as horror, perhaps mystery and supernatural, as it taps into that whole "why wouldnt there be ghosts?" line of thinking. Very typicaly Gulzar movie otherwise, slowly paced but still keeps you enthralled enough to keep watching. The philosophy of it was by the end a little hazy for me, I guess I need a rewatch.

Love the songs as well, especially the mujra by Hema Malini. Amazing.

Thanks so much for recommending this! I bought it based on your recommendation but didn't get around to watching it until last night. I thought it was really moving, and hauntingly beautiful. I agree with Veracious that it's unfortunate that the songs weren't subtitled, since I felt like I was missing out on a lot there, but even without understanding the lyrics, I thought the songs were amazing.

I am so glad you enjoyed it Cindy! I think I should start translating lyrics then- its only fair that someone should.