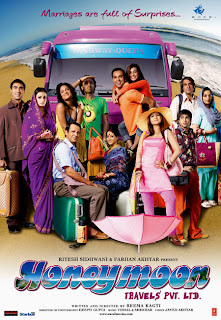 Ok ok- so I do have a million reasons to love this movie, the 1st of which may be that I too honeymooned in Goa not too long ago. But then I'm crazy in love with Boman, Shabana, and Abhay (swoon swoon, double dizzy swoon).

Basically the movie deals with 6 couples on their honeymoon to Goa (on a neon pink/purple bus!), and the events that essentially unfold in their 1st week of marriage.

Some of the marriages make it through the honeymoon- others dont. Abhay Deol and Minishha Lamba rocks as the desi super couple- I have followed Abhay since Ahista Ahista, and man can he act. Despite the limited scope of his character, he redeems himself remarkably well.

The Diya Mirza-Ranvir pair breaks in 1 day- she has a boyfriend (Arjun Rampal) whom she promptly runs away with.

Sandhya Mridul is brilliant as the woman who has married using an online matrimonial service, in fear of living alone, now that the boyfriend has turned out to be a married man. Unfortunately for her, she has married a gay man- who has taken the plunge only to placate orthodox parents who are clueless about his sexuality. Sandhya chooses to stick by him, at least for the present, in fear of shocking her own set of parents with a divorce- but what is the longevity of this uneasy coupling?

Amisha Patel is a human barbie- a pretty chatterbox living in her own dreamworld, whose husband tires of her soon after the honeymoon begins, and realizes his own homosexual leanings. Oblivious to his mental ups and downs, Amisha soldiers on, and the husband comes around in time- we can see that he wont give in to his heart's true desires and will stick by her.

Kay Kay and Raima are both brilliant- obsessed with controlling each other now that the wedding is done with, they slowly come to an understanding- of themselves and each other. Both learn to let go of their preconceived notions and to accept each other, and appear pleasantly surprised at the satisfaction they receive. This is a beautiful romance to watch.

Boman and Shabana are very very good- but my quibble remains with the characters etched for them, which edge on being boring with their predictableness. These two are capable of so much more as actors- I cant help but feel that they could have perhaps been used to even better effect. This is not a real critique though- as it stands, this love story has the most depth of all.

All in all, Honeymoon is a really good film- humane, comforting, sweet and reflective- I think the Indian movie industry needs a lot more movies like this, along with the melodramatic and hyterical masala we are usually subject to.

Posted by Shweta Mehrotra Gahlawat at 10:46 AM