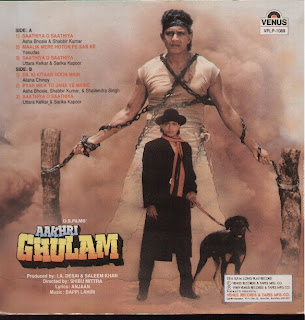 
Here again, is a decidedly terrible Mithun movie- I have again forsaken the names of characters, and am opting to use the names of the actors themselves.


A poor man and his young son are slaves to a rich landlord, Anupam Kher. The boy and the landlord's daughter are friends, and we are subjected to an idiotic pre-adolescent romantic song as the movie opens. Much to our confusion, the same female singer provides the score for both kids- but what the heck.... 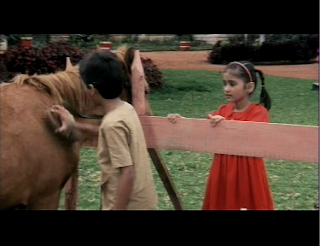 The landlord of course doesnt like this, and has the kid beaten up on the pretext that he has stolen his daughter's anklet. 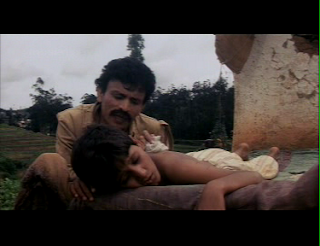 Further, he sends his daughter to study abroad, simply to keep her away from the boy, who by now has found the darned anklet. 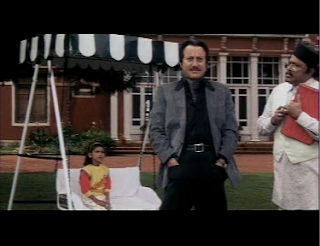 Soon, the boy's dad also dies, leaving him a slave to Anpuam, who is also to bring him up (the boy, not the dad- the latter is dying! heeh) 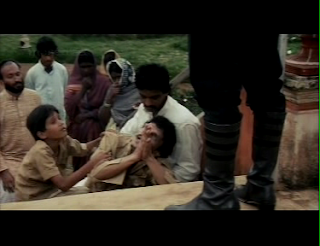 Fast forward 10-ish years...even though the boy has grown to be Mithun who looks about 35. Mithun still has the damned anklet and looks at it obsessively whenever he has a chance. Look at this carefully now, since it'll come in handy as the movie progresses.... :) 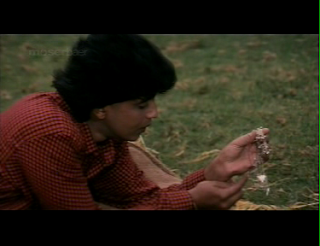 Pretty soon, he kills a few people while saving the landlord's life, and lands in jail, where the other prisoners don't like him too much. Even though he murdered 2 people, he gets only 3 years (huh??), since it was in self-defence. 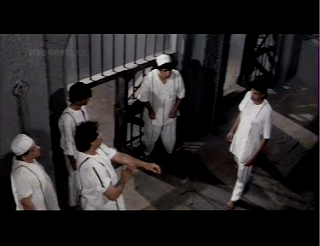 While he is in jail, the landlord's daughter comes back to India. She has grown into a rather pretty but fuggly Sonam, and meets her brother enthusiastically at the airport....looks like he is trying to feel her up really....eugh. 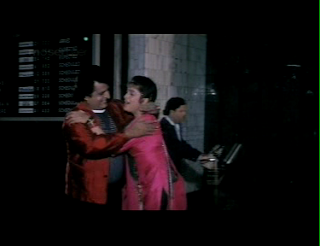 Mithun gets out of jail, and is next ordered by Anupam (the landlord) to kill Raj Babbar, the union leader at his factory. Unfortunately for him, Mithun himself gets in trouble, and is rescued by Moushami, Raj's wife. Soon enough, Sonam also comes by, and the 2 couples share a Diwali song...(how come we never had Diwali songs? how come we still don't have Diwali songs??? who the heck does have Diwali songs??? Count the number of times "Diwali" is used in this paragraph!) 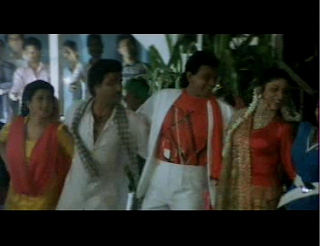 Anupam is properly mad, and has Raj killed anyway.. 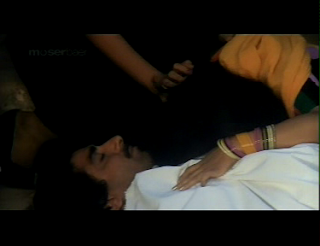 And has Mithun framed for the murder, with---- you guessed it-- the damned anklet being found in the dead body's hand. Now right away this makes no sense. If Mithun did kill Raj, why would they be playing with an anklet before the murder???? Ughhhhh.... 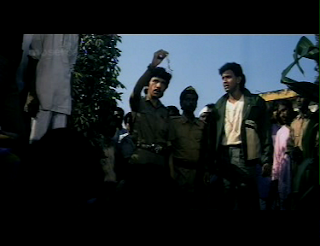 Mithun runs off, faster than any police jeep, jumps into the local river and is presumed dead by all and sundry. 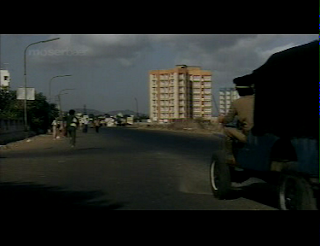 However, he is in fact rescued by a random saint who is made up to look like Jesus (!!!) and sings songs about equality and love etc. 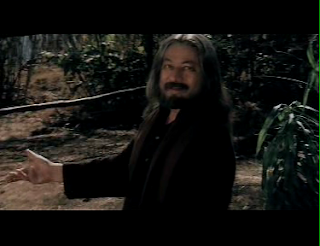 Mithun's eyes are finally open to the injustices meted to him, and he sets out to seek his revenge....but before that he calls up Sonam and makes out with her a little...(!!!) 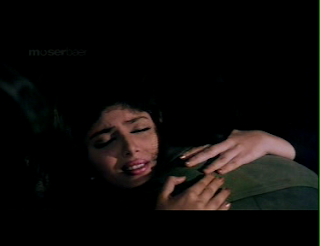 Romance can wait- he dons some pretty fuggly outfits, and bashes guys wearing outfits as bad as he does... 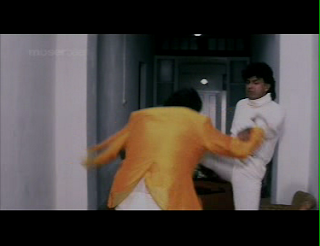 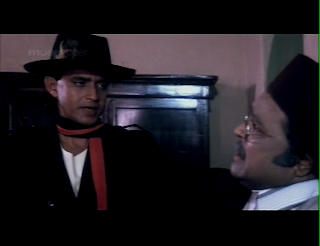 Its like all parties concerned are trying to compete as to who can possibly look worse....a guy dies wearing Michael Jackson's jacket.... 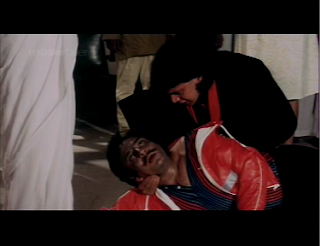 It all works out with Mithun finding that Anupam was truly the man behind Raj's murder (you'd think he know it already- since Anupam had himself asked him to kill the guy- but- I repeat, again- whatever). 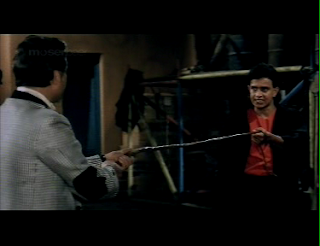 Just as Anupam and Mithun are having a face off, the other villains arrive- the plot takes yet another 90-degree turn with the other goons now threatening to rape and ravage Sonam and take off w/ Anupam's wealth. 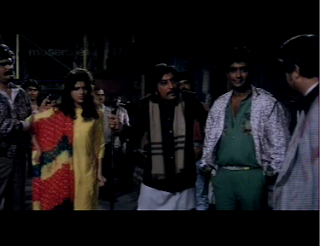 In another heartbeat, Anupam appears to be cradling the tied-up Mithun in his arms, begging him to save his daughter (Anupam's). 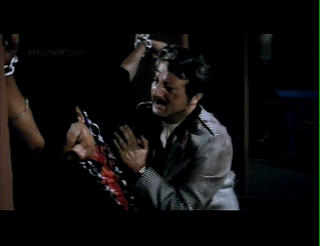 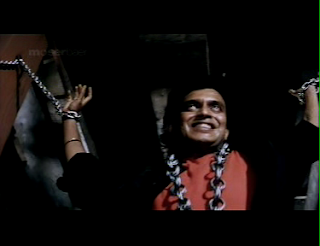 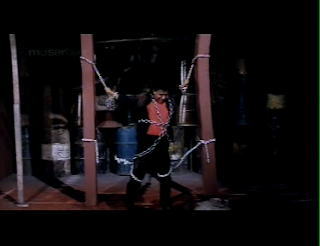 Rofl....check out the cardboard pillars behind him.... 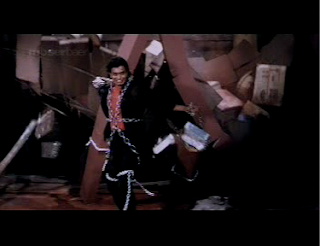 And by the end of the ensuing fight, Anupam dies saving Mithun from a random bullet. Of course he betroths Sonam to Mithun before he dies off completely (!!!). 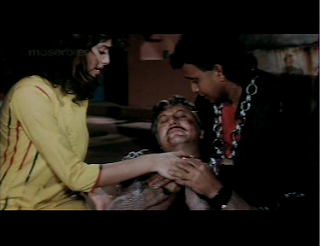 In conclusion: Breathless and unintentionally hilarious, this is truly a 80's Bollywood mayhem masterpiece- nothing makes a whit of sense, but then- you don't really want it to!

PS: Who wants to bet that the police actually returned that funky anklet to Mithun? :D And he lived happily ever after- with the anklet and the girl?

I ask you, what good is redemption and getting the girl if you do not have your anklet?!?

Priceless. I am soooo glad you wrote this. I'm also going to send it to a Mithun appreciator I know...he'll be delighted!

Keep rockin' the Mithun (and any other movies too)!

:D Thanks Beth.
Mithun's still the man! And he gets the anklet every time- rofl.

It seems you are quite a Bollywood fan just like me, mam :o)

I also have a small blog on Bollywood. It would be wonderful, if you take some time out of your busy schedule and have a quick look at my blog.