Yes I know I had promised Jan as Mithun Month- but the batch of recently acquired Ramsay movies proved too strong a temptation, and here we are :) 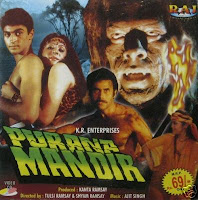 The local Thakur is off on some jouney with his daughter. His daughter wanders off in typical dumb-girl-in-a-horror-movie style, and is promptly waylaid by Samri (Ajay Agarwal) the local evil magician who rapes her, thus rendering her pupils grey (huh??) 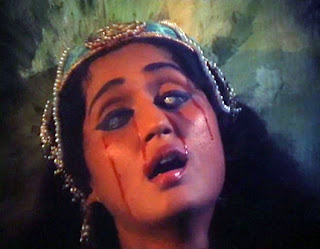 The Thakur is properly mad at Samri, and has him beheaded, with the head is buried in a wall in the Thakur’s palace (go figure), the rest of the body is interred in the graveyard. A dying Samri curses the Thakur that all the daughters of the family will die off during childbirth. 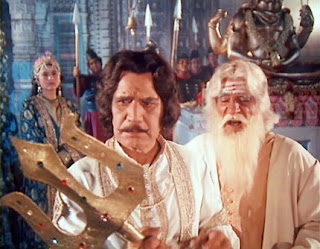 Centuries pass, and Samri’s curse has apparently been coming true. The last Thakur (Pradeep Kumar) is unwell to marry off his daughter Suman (Arti Gupta) for fear she would die off as well. To that end, he forbids her from marrying her boyfriend Sanjay (Mohnish) (such rubbish- they might marry and adopt). 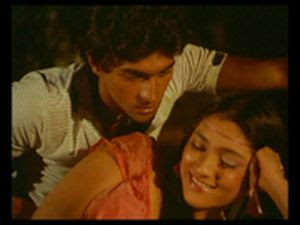 Cheesed off by dad’s attitude, Suman and Sunjay take off with a friend Anand (Puneet Issar) and his wife to the old palace where Samri’s head resides, to seek some resolution to what they believe is the old man’s active imagination. 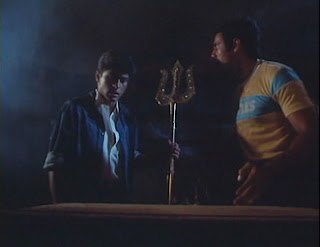 Of course they manage to bring back Samri’s ghost, who is up to his old shenanigans. 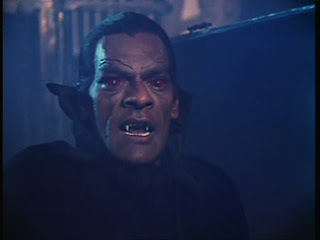 And of course they manage to send him back again as well, with some truly terrible “special” effects, fake lightening, gratuitous nudity and smeared makeup. All in all, a glorious fun fest, too horrible even be called a B movie :)

Fun Facts:
1- Who would have thought that our heroine, Suman (Arti Gupta) would grow older and wiser and be one of the producers of “A Mighty Heart” (2007)???
2- The movie was such a huge hit that it gave rise to probably India’s 1st horror sequel, “Samri,” (1985) touted as India’s 1st 3D horror movie, and a later bomb "Bandh Darwaza" (1990).
3- Puneet Issar acted in “Coolie” (1983) with Amitabh Bacchan, and threw the fateful punch that had Amit in the hospital for months: a calamity of national proportions, or so it seemed by all the media coverage it got at the time.
Posted by Shweta Mehrotra Gahlawat at 10:53 AM

If you haven't seen teleport-city.com, do give it a look - horror and B (and sub-B) galore. Plus an affection for the Ramsay Brothers.