I have been won over by Tamil and Telegu movies. A few months ago, I chanced upon a copy "Operation Duryodhana," which had NO subtitles, but was very easy to understand and so crazy that I decided to find some more...I next saw "Bomarillu"- and am very possibly the last person on the planet to have caught this very frothy pic. As a geenral rule I stay away from romances, but "Bomarillu" sold me on them....to the extent that I sat through the last movie we shall be covering today- "Unnale Unnale." 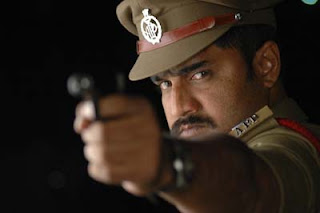 What its about:
Operation Duryodhana was the code name for a sting operation in India which resulted in a bunch of MPs going to jail. This movie is NOT based on that incident, but is nevertheless a spoof on current regional political issues. Srikanth is a police officer, whose entire family is killed by the local political heavies since he refuses to assist them in their illegal activities. Beaten almost to death, he cuts his hair and wear blue contacts, to turn into a political heavy himself (!!!!!) :D How he extracts revenue from the goons who ruined him, and how he goes back to being a regular police officer is the rest of the story. The movie is absolutely unreal, with insane situations- for example, Mumait plays a woman who is a politician by day and a bar dancer by night....(wth???)

Highlight:
All the oozing machismo- it was parodied to the point of hilarity! The testosterone on the sets must have been crazy :) On the otherhand, I may have completely misunderstood, and they may have simply been unintentionally funny(!) :D

Quibble:
Didn't like the part w/ Srikanth's kids dying- maybe the director wanted to show extremities because of the spoof factor, but kids dying , however improbably, doesn't work for me. 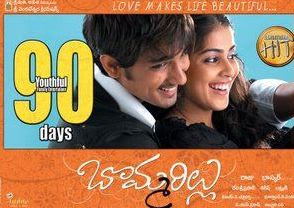 What its about:
Siddu (Siddhartha) has a problem- his dad, a rich businessman, adores him! The over-protective father drives Siddu crazy, but he bears it all, until the day his dad fixes his marriage with a girl of his own choice. Siddu himself falls soon enough for Hasini (Genalia), and begins to realize the importance of asserting himself and letting his dad know about his likes and dislikes. The dilemma of introducing Hasini to the family, and coming into his own is the rest of the movie. The subtitles rocked, and it was very easy to love this movie, which I do!

Highlights:
1- EVERYONE in this movie tries hard- and it works!!! aside from Siddharth and Genalia, the entire supporting cast is amazingly charismatic, and the movie benefits by it.
2- Even though I couldnt understand the songs- they did not come w/ subtitles- but they were still pretty catchy and fun. 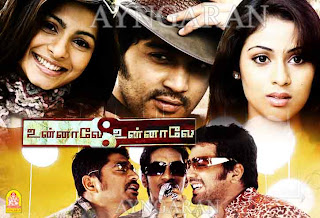 Title: Unnale Unnale
Year: 2007
Cast: Karthik, Sadha, Tanisha.
What its about:
This was hard to watch, 'cos there were no subtitles in my copy. It seems that Karthik and Sadha have a relationship, but Sadha doubts Karthik's eveyr move. Karthik cheats on her once too many, and she dumps him. Despite him changing his ways, she cant reconcile herself to trust him. They both move to Melbourne (separately), where Karthik meets Tanisha. Tanisha happens to be Sadha's personal assitant, and tries to help Karthik get back together with her, but begins to develop feelings for him anyways. Despite many efforts it doesnt work out, and Karthik ends up with Tanisha!
Highlights:
1- The story! I was rather surprised to find a romance where love doesnt conquer all, and people do have issues with each other and themselves.
2- This has to be the first time I do not dislike Tanisha- she should stick to movies in the South- does much better there.
Quibbles:
1- Ummm...Sadha's character is fairly unrealistic- sure she isnt given a very sympathetic character to play, but her behavior doesnt make sense either. This may also be because I do not understand the language.
2- The movie gets too much into Melbourne- felt like I was watching the Travel Channel at times. :D
Posted by Shweta Mehrotra Gahlawat at 1:01 AM

I looove Melbourne. I do not looove Tanisha. I am very intrigued!

re: Bomarillu: I haven't seen it either, but all the European bloggers have raved to me about it nonstop. You're adding fuel to the fire....

Aw, great that you've found Southie films. I do love a good Telugu/Tamil romp in between the usual Hindi films. :)

Bommarillu is a splendid film, one of my favourites.

Yes I agree- but I find it Southie movies difficult- I have no sense of whether a movie is Tamil/Kanadda/other, and am not sure on what to see- thpough clearly, anything w/ Siddhartha would be watchable. Do you know other good ones?

The Southie movies sound interesting. Some recommendations, if you like - do watch Kandukondein Kandukondein, an adaptation of Sense and Sensibility - fabulous. And an old favourite of mine with Kamalahasan is Oru Kaithiyin Diary which was remade in Hindi with AB - I think Andha Kanoon but am not sure.

Oh I've heard about "Kandukondein Kandukondein"!- I really need to find access to Southern movies- so far they are few and far between. I'll keep both in mind, and start hunting. Thanks!

Update! I get to watch Bomarillu with Babasko this week! And I echo BEV's love of KK, which I agree is totally and utterly fabulous. The mynah bird song is one of my favorite picturizations ever.

Brilliant!
I am feverishly praying on ur loving it- it deserves it! wherrree do i find KK now :)?!!
:P

I got it online somewhere; I forget where. It's also called I Have Found It, in case that helps....

the name is truly appropos I must say. thanks- i am googling it as we speak- :)

I just watched Bomarillu and was relatively unmoved. It had a few cute or funny moments, but I didn't find it noteworthy, or more cute and/or funny than lots of other things.

Shweta, you are second to the last to have seen Bommarillu! I am the last. :)

I'm so glad you liked it. I'll have to check out the others you write about here too. I found these cute pictures to bring back some memories for you:

Sitaji- thanks for stopping by! I am about to see Dasavtharam today- and so looking forward to it- hope they have subtitles....:D