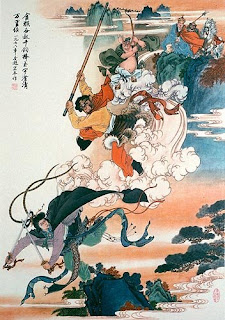 I held off on writing this post for 3 days, though I saw the movie this past Friday, and could have easily posted it. Simply because if I wrote too soon after, I’d be babbling like an incoherent fan-girl, having worshipped Jackie Chan since a wee babe. Well its HAS been 3 days, and I’m STILL in fan-girl mode, so no point waiting much longer …

But legends first. I had read as a child, a translation of the classic Chinese novel, “Journey to the West,”, which features Sun Wukong (aka the Monkey King) as the hero. A humanoid monkey (from what I could gather), Wukong had incredible strength and speed, and was also an expert sorcerer. Each of his hair, if plucked by him, could transform into his clones, who would match his powers. His weapon of choice was his magic staff, which helped him scale up to the heavens…but that is as far as I will go, since this is the point where the movie picks up on the legend - here is a more in-depth description, in case you are interested.

Now let’s get to the movie itself. 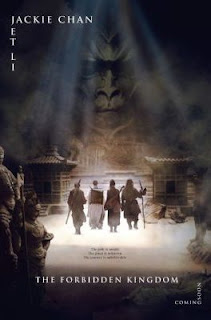 The movie features a slightly modified version of the original legend-

Once the Monkey King (Jet Li) reaches the heavens, he fights the evil Jade warlord (Collin Chou), who tricks him, turns him to stone and flings the magic staff away…across dimensions to earth.

There, he meets the drunken immortal, Lu Yan (Jackie Chan), who tells him the story behind the staff, and tells him that the only way to get back to Boston is via the yellow brick road- no no, I’m just joking, but you have to admit the parallels with Dorothy are obvious- the only way back is if Jason restores the staff back to the Monkey King’s stone image. 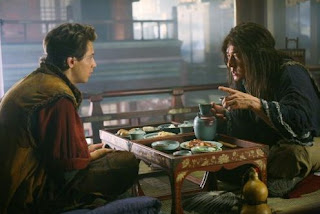 Further down the road, they meet up with Golden Sparrow (Crystal Liu Yi Fei), who helps Lu teach Jason Kung-Fu. Now I realize martial arts take years to hone, but who am I to argue movie making in ancient China??? I quietly express acquiescence in delirious happiness. 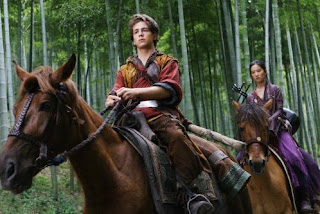 They also meet up with a monk (Jet Li again, and yes it is a obvious sign, but I am not saying anything- just watch it), who has a totally fun fight with Lu in a temple when they first meet, to decide the ownership of the staff. Folks, this is probably the best part of the movie. 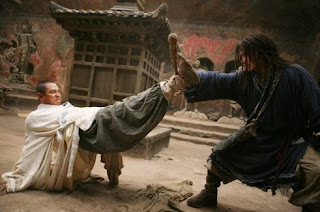 Of course the two end up friends, and join forces in teaching Jason, which gives rise to some typically Jackie-esque humor. 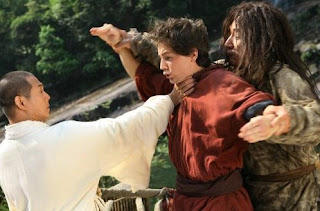 They cross the desert to reach the Jade palace, 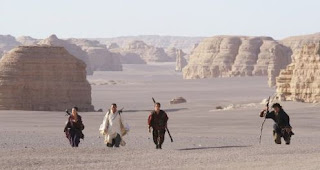 ... but are stopped on the way by the White Hair Demoness Ni Chang (Li Bing Bing), 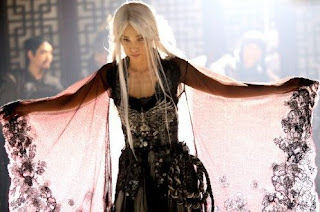 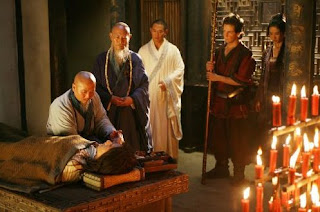 For the sake of friendship and honor, Jason rides to the Jade palace, where the monk, Sparrow and even a prostrated Lu join him for a final show down. 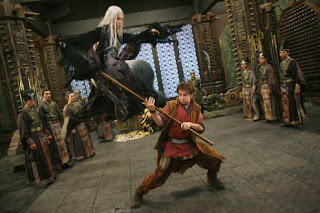 Its just so much fun- you have to watch this. ASAP.

Applauds:
1- Kudos to the makers of the movie: they fairly successfully integrated a real Chinese legend into a “Western” movie, without slighting it. Plus, they bought Jackie a role much needed- I had been heartily sick of his endless Rush Hours and the despicable Tuxedo- finally a Hollywood role he owns.
2- Lovely visuals. Beautiful scenery.
3- Jet Li, is hot despite bad teeth.
4- The Monkey King’s portrayal is super fabulous- all I had ever imagined.

Quibbles:
1- The plot is super predictable.
2- Sparrow keeps talking in third person, annoying to the point of maddening.
Posted by Shweta Mehrotra Gahlawat at 9:31 AM