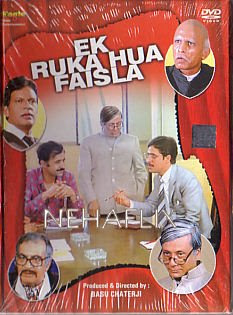 Made by Basu Chatterjee, on the face of it, this TV movie is essentially a remake of “12 Angry Men,” (1957), based on a play by the same name. However, some really good, and at that time unknown TV actors made the Bolly version a movie standing its own ground.

Jury trials were abolished in India in 1960, and since this was made for a television in 1986, I would guess audiences did not really identify with it fully. I certainly did not, when I saw it, and appreciate it better as an adult.

The plot is straightforward on the surface: A poor teenager, from the wrong side of the tracks (literally- he lives in a chawl on the side of the train tracks) is accused of killing his father. There are 2 witnesses: An old man who claims to have heard the entire incident (he lives next door), and another woman who claims to have seen the actual act of stabbing (she lives across the tracks). Plus the murder weapon, a knife, was found at the crime scene, and had been noticed in the hands of the boy earlier in the day.

All these facts are recounted to us by the jury of 12 who have gathered in a court appointed room to deliberate. We see only 3 glimpses of the outside world during the entire duration of the movie, and even glimpse the accused’s face just once .

Except juror #8, KK Raina, the jurors are not really enthusiastic about the case in the beginning of the movie. A few are highly prejudiced against the accused (Pankaj Kapoor and Subbiraj), while others are more interested in quickly coming up with a decision so that they may leave early to catch a movie or relax at home.
KK introduces the concept of “reasonable doubt,” to the viewer as well as his fellow jurors, citing that the evidence is circumstantial: the female witness had poor eyesight and could barely see across a room, let alone across the train tracks. The male witness was not only hard of hearing- there was a train crossing the chawl at the time of the murder- therefore his evidence too had little meat. As for the knife, it was a common knife available for sale in any poor part of town.

It is still fascinating to see how KK, using little argument, discusses the reasonable doubt that the boy may not be the murderer, and in the process brings to the forefront each juror’s own private hells and prejudices. In the beginning of the movie we see 12 men: half of whom are quiet, and in agreement with the other half, who are the primary players, discussing the case jovially and rationally, full of self confidence. As the arguments progress, pandemonium ensues and they resort almost to fisticuffs. By the end, the two groups almost exchange place-s the quiet ones have gained the confidence the loud jurors have lost.

If you have seen “12 Angry Men,” you know that by the end of the movie, the jury acquits the boy, and the jurors finally leave for the day, each wiser by a little. But knowing what happens doesn’t matter- this one deserves watching.

Highlights:
1- This is probably the best performance by Annu Kapoor- he became a loud and scary TV anchor after this, and his acting skills pretty much went to waste. His portrayal of a very old man is really amazing; he is definitely better than Pankaj Kapoor here, who probably had a stronger role.
2- KK Raina- good, solid performance, though definitely inferior to Henry Fonda’s in “12.”
3- A very young Pankaj Kapoor totally hammed it up- which is not necessarily a drawback.
Posted by Shweta Mehrotra Gahlawat at 11:28 PM

I love this movie - its such a beautiful exposition of how people's experiences color their reasoning. When I saw this as a kid I was convinced that Pankaj Kapoor and Annu Kapoor were both old men! Wonder what happened to KK Raina... Dont remember seeing him in anything after Byomkesh Bakshi.

I have seen the 12 Angry Men too but prefer Ek Ruka Hua Faisla, perhaps because I can understand Indian characters and motivations better. Which one did you like better?

KK does a lot of television now, esp since the Indian TV industry is booming. But yeah, nothing that puts him front and center.

Ohh thats such a hard question :)! Annu surpassed the guy who played the same role in "12." And Subbiraj was so dislike-able in his bit that no one could come close- So while I agree with you that "Ek" is a better movie, personally, Fonda did touch me more than KK.

Hi Shweta,
It has been an absolute delight to glance through your blogs. Such love for cinema not limited to glitzy ones is hard to find. You also take pains to put up shots from the movie.

There is one request though. Do not reveal the complete story/plot. Even for the older movies.

The most interesting parts are the trivia and your take on the movie. Rather than the plot and story you can give your analysis of the movie or major aspects that stand out in the movie.

BTW I have watched both the movies. Even though the Indian version is verbatim copy but it stands out very very well. I liked both of them and comparison is a little tough for me.

Thank you for so many compliments Prateek!
Not giving away the plot is hard, but I promise to give out spoiler warnings in bold if there is something that will take away from general viewing pleasure- fair? :)

I definitely agree that a comparision is difficult here- perhaps if I read the original book, it may be easier to decipher who was more honest to it.